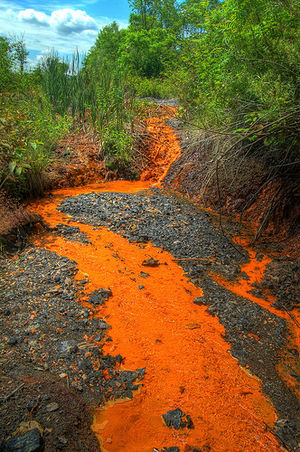 Acid mine drainage in a stream just outside of Pittsburgh, PA. [[1]]

Acid mine drainage (AMD) occurs when metal sulfides, most commonly pyrite, are exposed to and react with air and water. When water flows over or through sulfur-bearing mine tailings, a chemical reaction occurs between the water and rocks resulting in metal-rich water. AMD typically has a bright orange, yellow, or bownish-red color to it. The mine drainage is acidic, as its name states, and found around ore and coal mines. Abandoned and currently operating mining activities contribute to AMD. Metal rich drainage can also occur in areas that have not been mined. Areas like construction sites and other places that have been highly disturbed can exacerbate natural rock weathering processes leading to acidic drainage.

An area heavily mined for coal, therefore greatly impacted by AMD, is the mid-Atlantic region in the middle of the Appalachian Mountains. Here, and everywhere AMD occurs, has a highly altered ecosystem. The greatest consequence of AMD is water pollution. This in turn results in contaminated drinking water, damage to aquatic flora and fauna, and corrosion of man-made infrastructure.

Microorganisms like bacteria and archaea significantly affect AMD. When metal sulfides, usually pyrite, that are contained in rock are exposed to water and air, an oxidation reaction takes place. Microbes speed up the decomposition of these metal ions. Microorganisms also play a huge part in the bioremediation of AMD. Techniques that are being researched include using metal-immobilizing bacteria, biocontrol with bacteria and archaea, and bioleaching. [3]

AMD is affected by characteristics such as pore size, particle size, permeability, and mineral composition of the materials being oxidized. The size of particles directly influences the surface area of rock exposed to weathering and oxidation. Surface area and particle size are inversely related. Therefore very coarse grain substances expose less surface area; however, they have deeper crevices between particles. This characteristic may let air and water penetrate further, thereby exposing more substance to oxidation and ultimately generating more acid. Conversely, fine grain substances may prohibit air and water flow, but they also have more surface area exposed to oxidation. Another important factor, air circulation is impacted by wind, barometric pressure changes, and perhaps convective gas flow due to the heat created in the oxidation reaction. These variables are part of a positive feedback cycle. Over time as substances weather, particle size is decreased, exposing more surface area and affecting the physical characteristics of the unit.

Water and oxygen availability are the most important factors though. Both materials are essential to create acid drainage. Atmospheric oxygen is needed to drive the oxidation reaction, particularly to maintain the quick bacterially catalyzed oxidation at pH values less 3.5. When the concentration of oxygen in pore spaces of mining materials is less than one or two percent, the rate of oxidation is notably reduced. Water has several functions in the generation of AMD. It not only serves to transport the oxidation products, but also works as a reactant and medium for bacteria in the oxidation reaction.[4]

A lot of mines use the technique of sub-surface mining, where extraction occurs beneath the earth’s surface. With this technique mines are commonly below the water table, requiring water to be pumped out of the mine to stop flooding. When a mine is deserted, water once again fills in its natural position beneath the surface. This water is one of the necessary ingredients for the oxidation of pyrite leading to AMD formation.

Exposing pyrite to oxygen and water leads to an oxidation reaction, where hydrogen and sulfate ions and soluble metal cations are created:

Pyrite oxidation occurs naturally at a slow rate in undisturbed rock. However, the acidity created is buffered by water. Because mining exposes more surface area of these sulfur-bearing rocks, additional acid is produced that is beyond the water’s usual buffering capabilities.

When enough oxygen is available either from dissolved oxygen in the water or the atmosphere, further oxidation of ferrous iron (Fe2+) to ferric iron (Fe3+) occurs:

Ferric iron (Fe3+) can either precipitate as ochre (Fe(OH)3), the reddish-orange precipitate observed in acid mine drainage waters:

or it can react directly with pyrite to make additional ferrous iron and hydrogen ions:

AMD is also known to be contaminated by toxic metals such as copper and nickel and lesser trace metals like lead, aluminum, arsenic, and manganese. Heavy metals are normally less toxic at pH levels near neutral. On the other hand, trace metals like cadmium, copper, and zinc which may also be found in mine drainage, are toxic at even the lowest concentrations [6]

AMD effects' on the environment vary from the eradication of all but a few most tolerant algae, macroinvertebrates, and fish, to insignificant or no effect. According to Jane Earle and Thomas Callaghan of the Pennsylvania Department of Environmental Protection, "the most severe effects are caused by high volume, low pH discharges with high concentrations of dissolved metals that drain into lightly buffered streams and produce accumulations of precipitated iron or aluminum. Little or no effect may occur from low volume or alkaline discharges with relatively low concentrations of metals that drain into moderate or highly buffered streams." [6]

The general agreement among scientists of microbial-induced pyrite oxidation is that these microorganisms raising the amount of available ferric iron which increases the rate of pyrite oxidation. Acidithiobacillus ferrooxidans, for example, use reduced ferrous iron in AMD areas as an electron donor for energy creation at low pH.

Named extremophiles because of their ability to live in severe conditions, microbes living in AMD have to deal with low pH levels (extreme acidophiles) and sometimes high temperatures (extreme thermophiles). There are more microorganisms besides archaea and bacteria present in AMD. Other potential individuals in the community include fungi, algae, protozoa, and yeasts.[8]

Scanning electron micrograph of A. ferrooxidans[[2]]

Organisms living in such harsh conditions must have adapted special systems for tolerating their environment. Scientists are particularly interested in the ability of microorganisms to to maintain internal pH homeostasis in such acidic conditions. The most studied acidophilic chemolithotroph is Acidithiobacillus ferrooxidans. A. ferrooxidans grows best in the range of pH from 1.5 to 3.5. But within this range, it is able to retain a cytoplasmic pH near neutral. Some research suggests a reversed membrane potential is responsible for internal pH maintenance, though the specific mechanisms for extreme acidophiles are unknown.[9]

At Iron Mountain near Redding, CA research is currently focusing on a “molecular-level understanding of the metabolism of organisms involved in AMD formation”. The project is using several methods to identify the molecular community and the roles of specific organisms present. DNA sequence analysis is used to learn what organisms are in the environment and then fluorescence in-situ hybridizations (FISH) determines cell type distribution and geochemical conditions. Samples are taking from different locations such as sediments, pore fluids, free-flowing waters, and subaerial biofilms. These field samples then serve as innoculum in various media that are incubated under aerobic, microaerophillic, and anaerobic conditions. Information about growth rates, metabolic capability, and optimal growth conditions is taken from isolates which are then identified through DNA sequence analyses. Currently, analysis has identified Leptospirillum group II, Leptospirillum group III, and Ferroplasma acidarmanus. [9]

Begun in 1995 by Federal agencies, the Acid Drainage Technology Initiative (ADTI) was created “to identify, evaluate, and develop cost-effective and practical acid drainage technologies”. The main goal of ADTI is to address drainage quality concerns with metal mining and acid drainage from coal mines for “abandoned, active and future mines”. ADTI wants to develop a consensus among regulatory agencies (Federal and state) and industry through techonology development. Specific studies include in-situ deep mine technology demonstration where they are injecting alkaline solutions into the acidic mine pool. [10]

At the deserted Calliope mine, three Sulfate Reducing Bacteria bioreactors were installed to treat discharge waters. A bioreactor is a lined pit or trench that contains various substances, usually a combinations of compost, other organic matter, cobbles, and sometimes an alkaline agent, over which water flows. In this study, two of the three reactors were positioned below grade to limit the effects of temperature changes and one above ground to investigate the results of freezing. Filled with cobbles, crushed limestone and cobbles, the reactors were monitored monthly. The results were a reduction in acidity and toxic metal concentrations. Overall, the study was a success showing future potential for bioreactors as a treatment method. [5]

[3] “What is Acid Mine Drainage”. U.S. Environmental Protection Agency. http://www.sosbluewaters.org/epa-what-is-acid-mine-drainage%5B1%5D.pdf