A probiotic is a product containing viable, defined microorganisms in sufficient numbers, which alter the microflora (by implantation or colonization) in a compartment of the host and by that exert beneficial effects on the host 10. Evidence for the use of probiotics date back thousands of years to the Old Testament where it was cited that Abraham owed his fertility and longevity to the continual consumption of yogurt 2. However, the concept of probiotics did not come to light until the 1900s when zoologist Elie Metchnikoff noted that Bulgarian peasants lived longer, healthier lives due to their regular consumption of fermented milk products 7.

The majority of probiotics are categorized as lactic acid-producing bacteria. As a result of carbohydrate fermentation, these bacteria produce lactic acid, thus their name. Lactic acid probiotics help aid in improving intestinal tract health, enhancing the immune system and reducing risk of certain cancers 7. While the beneficial effects of probiotics has been noted and heavily studied, the mechanisms of probiotics still remain unknown. However, studies have shown strong probiotics are characterized by the ability to adhere strongly to intestinal epithelium 2.

Lactobacilli are favorable in the production of strong probiotics due to their innate properties, which include the ability to adhere to cells, reduce pathogenic adherence, persist and multiply, produce acids, safe and nonpathogenic, and form a balanced flora 8. While all these properties make a strong probiotic, the main focus will be on the adhesion ability of Lactobacillus acidophilus. The ability to adhere to cells is the most important factor in making a good probiotic, because without this the probiotic strain would not be viable. Adhesion to intestinal epithelial cells is necessary for colonization of probiotic strains to prevent their immediate elimination by peristalsis 6.

In vitro Studies & the Difficulties in Studying Adherence Mechanisms

The mechanisms of adherence to intestinal epithelial cells of not just Lactobacillus acidophilus but all other probiotic strains still remain largely unknown. This is not due to scientists not having done enough research but rather the conditions to perform proper experiments remains difficult. The major setbacks to understanding the genetic systems responsible for intestinal adhesion of probiotic bacteria are the arduousness in performing human trials, as well as, the complex and kinetic nature of the intestinal environment 3. What scientists have been able to do are comparison trials of untreated bacterial strains and mutant strains and record specific properties that are involved in adhesion. 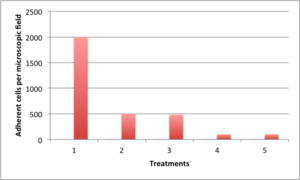 In order to gain a greater understanding of the mechanism of action, cell surface proteins that promote attachment to intestinal tissue can be studied 3. An in vitro study done on cell surface proteins in Lactobacillus acidophilus identified 2 major proteins that had strong likelihoods of involvement in adherence to epithelial cells, fibronectin and mucin-binding proteins. These proteins were then mutated, inactivating certain surface proteins in the S-layer. The control binding proteins were then compared against the mutated proteins to test for adherence abilities3. Results showed that genes encoding for FbpA, Mub, and SlpA contribute to the ability of L. acidophilus to adhere to intestinal cells 3.

Another in vitro study done on Bacillus cereus inactivated surface proteins by treating it with LiCl or trypsin. Results showed there was a significant decrease in adhesion to epithelial cells16. The inactivation of specific surface proteins is a popular method to determine which proteins contribute to the adhesive properties in probiotic strains. Furthering these studies will hopefully address the obscure mechanism of action.

The function of the vital S-layeris not well defined as this layer can differ dramatically between bacterial species. S-layers are involved in cell adhesion and surface recognition, cell protection, they can also function as scaffolding for enzymes and virulence factors 12. 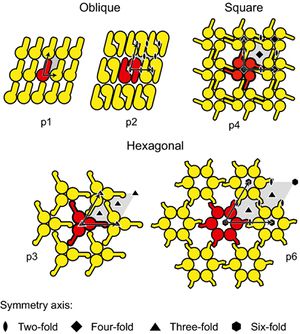 The basic structure of an S-layer is a lattice alignment (oblique, square, or hexagonal symmetry) of proteins or glycoproteins subunits. The morphological units are composed of one, two, three, four, or six identical subunits 13. The center-to-center spacing of these morphological units ranges from 2.5-35 nm 12. The S-layer is porous with pore size ranging 2-8 nm 12. Sequence homologies of S-layer genes do not occur often. This re-emphasizes that the S-layers differ not only between bacterial species but within them as well. In closely related species, for example Lactobacillus acidophilus and Lactobacillus helveticus there was an 80% homology in their sequence, however there was minimal homology with Lactobacillus brevis 12.

While many studies have been performed to show the adhesive abilities of bacteria, the exact science behind their genetic systems remains unknown. The S-layer proteins of lactobacilli have been shown to function as adhesins, which are cell-surface components of bacteria that are able to adhere to other cells 4. By comparing untreated bacterial cells and ones treated with LiCl, in order to remove the S-layer, proved the adhesive nature of S-layer proteins in lactobacilli 4.

Additionally, once LiCl removed the S-layer, tests showed that co-aggregation was significantly reduced. Co-aggregation plays a role in competitive exclusion and reduces pathogenic load during mucosal flushing 1. This shows that the S-layer also plays an important role in strengthening the immune system.

Proteins within Lactobacillus acidophilus that bind to intestinal tissues

The following are surface proteins in Lactobacillus acidophilus, which differ from the S-layer proteins. It is believed that maximum probiotic effects can be achieved if the bacteria are able to adhere to mucus and intestinal epithelial cells 14. These adhesive proteins are not universal among the genus Lactobacillus. A study conducted by Bernet tested four different strains of Lactobacillus, only one strain showed adhesive capabilities 15. The following mucin and fibronectin-binding proteins are specialized for binding to the digestive tract, the main target for probiotics.

Mucin-binding protein
The mucosal layer that lines the digestive tract is involved in many important functions. A key function is its ability to protect or inhibit the host from pathogenic bacterial colonization 9. The digestive tract, for probiotics, is a key target for binding and colonization. It is important for probiotics to be able to bind to the mucosal layer because this layer comes into direct contact with digested food and is responsible for most digestive, absorptive, and secretory processes17.

It is important to understand, whether a strong probiotic strain, such as Lactobacillus, can bind to mucin. Research showed that lactobacilli have the ability to bind to mucin through comparison trials of untreated lactobacilli and adhesion-inhibited lactobacilli 9. This shows Lactobacillus has the ability to deter pathogenic bacterial colonization and aid the immune system. The experiment began with fractionating bacterial cell wall extracts to identify the mucin-binding protein9. The active fraction was then purified by affinity chromatography9. The adhesion-promoting protein was detected by adhesion inhibition and dot blot assays9. The peptides were then tested for adhesion to mucin by using dot blot adhesion assay9. The targeted adhesion-promoting protein on Lactobacillus fermentum was extracted using LiCl9. However this study was done on porcine cells rather than human cells. The next step in this research would be to see how effective and beneficial this would be to humans. 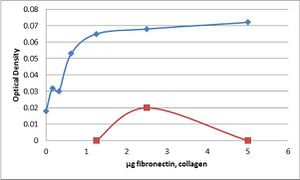 Fibronectin-binding protein
Previous research has shown that fibronectin plays an important role in bacterial adherence to epithelial cells 5. Fibronectin is a fibrous protein present in the gastrointestinal tract. If injuries were to occur in the GI tract, pathogenic bacteria would have great potential to infect the area. However, a good probiotic strain that has fibronectin-binding proteins can competitively exclude pathogenic bacteria 16. The extracellular matrix (ECM) of epithelial and endothelial cells is composed of proteins which includes collagen, fibronectin, laminin, and proteoglycan19 . In a particular study, Lactobacillus acidophilus bound to cell margins of human epithelial cells19. Fluorescent microscopy revealed that L. acidophilus was binding to areas where fibronectin was present19 . On the other hand, L. acidophilus was not binding to areas where there was no fibronectin present19. This is a good indication that fibronectin plays a role in bacterial adherence to epithelial cells.

Supplemental articles explain the extent of health benefits achieved from using probiotics and to further stimulate the debate if probiotic supplements should become as normalized as taking your daily vitamin pill.

a. Kalliomaki, M., Salminen, S., Arvilommi, H., Kero, P., Koskinen, P., Isolauri, E. (2001), Probiotics in primary prevention of atopic disease: a randomized placebo-controlled trial. The Lancet, 357.9262: 1076-1079.
This article studied and proved the beneficial effects of taking probiotics at an early age in order to prevent or reduce occurrences of atopy, allergic inflammation, and food allergy within humans. This is why it is important to choose probiotic strains with strong adherence capabilities. If the probiotic strain is able to adhere to the intestinal epithelium and competitively exclude pathogenic bacteria, the host will be able to receive a greater amount of beneficial effects.

b. Ouwehand, A., Salminen, S., Isolauri, E. (2002), Probiotics: an overview of beneficial effects. Antonie van Leeuwenhoek, 82.1-4: 279-289.
This article gives an overview of beneficial effects of taking probiotics. It also educates the reader that not all probiotics do the same thing. Certain strains can be used to treat specific ailments, much like specifically targeted medicines prescribed by a doctor. One strain can be specifically used for treatment of diarrhea while others can be used for reducing cholesterol, reducing symptoms of inflammatory bowel disease, aid in digestion, or aid in immune function. Probiotic strains do not all target the same area in the gastrointestinal tract. They are able to adhere to different cells. Understanding which strain binds strongest to a specific cell type is important in order to know how to treat specific ailments.

5. Hynonen, U., Westerlund-Wikstrom, B., Palva, A., Korhonen, T. (2002), Identification by Flagellum Display of an Epithelial Cell- and Fibronectin-Binding Function in the SlpA Surface Protein of Lactobacillus brevis. Journal of Bacteriology, 184.12: 3360-3367. [5]

Edited by Ashley Barnhill, a student of Nora Sullivan in BIOL168L (Microbiology) in The Keck Science Department of the Claremont Colleges Spring 2015.