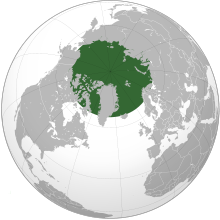 The Arctic is any space that is within the arctic circle that lies around the 66 degree latitude line. The arctic region is mostly made up of water and floating ice and what land that is contained within the arctic circle is made up of coastlines and small islands. The average temperature is very low with very little rainfall per year and do to its position on earth the arctic circle can experience weeks without the sun rising or vise versa weeks where the sun never sets. Such strange conditions limits what organisms can survive in the arctic. Since all of the circle is above the tree line only small shrubs, mosses and lichens grow and larger fuana include artic hares, foxes and musk oxen. Within this environment many habitats exist that are home to varieties microbes. Sea ice, permafrost soils, and thaw ponds on the thick ice shelves are the three main habitats for microbial life in the arctic (Vincent et al. 2009). In the floating sea ice, algae thrive in the pore spaces in the ice and make up an essential part of the primary producers for the micro ecosystem contained on the sea ice. On land decomposers and nitrogen fixaters dominate the environment and allows what little vegetation that is there to survive.

The average temperature in the Arctic circle region in winter is -40 degrees F and temperatures as low as -90 degrees F have been recorded(Kenneth 2002). At these temperatures most the rate at which most microbial processes occur will have slowed down.

Microbes living inside the pore spaces of sea ice are greatly affected by temperature since pore space increase/decreases based on the temperature which can limit the photosynthetic activity of the inhabiting algae (Krembs and Deming 2011).

permafrost soils do not allow for nutrients to be able to be easily accessible do to the frost layer and since the temperature is below freezing for most the year decomposition rates are slowed down making nutrients obtained from decomposition to cycle slower(Ostroumov and Siegert 1996).

Filamentous photosynthetic algae is the main microbe that you will find in floating sea ice. These algae are very important to the local ecosystem of the arctic and provide 57 percent of the marine primary production that occurs (Krembs and Deming 2011). The algae usually inhabits the lower areas of the ice and may make chains that extend out into the sea water itself to obtain nutrients.

Many nitrogen fixing bacteria exist in permafrost soils due to the lack of nutrients that are available to them. For more information on the proccess of fixing nitrogen [[1]]. Mycorrhizal fungi are also prevalent and form a symbiosis with many arctic plants allowing them the ability to obtain nitrogen in the poor soil(Hobbie et. al. 2009). If you want to read more on permafrost soil microbes a more detailed explanation can be found on the alaskan tundra page.

Thaw pools have a wide variety of microbes inhabiting them. photosynthetic cynobacteria are present allowing for primary production to occur. Many nitrogen fixing archaea are present in thaw pools due to the pools freezing and thawing cycles throughout year leaving void of many nutrients found in southern unfrozen permanent lakes (Vincent et al. 2009).

decomposition occurs slowly in the Arctic due to such low temperatures and anaerobic conditions in permafrost soils(Heal et al. 1981). Decomposition also makes potential energy sources for the microbes performing it, for more in this [[2]].

Many thaw pools and sea ice contain either photosynthetic cyanobacteria or green algae. These make up the lowest spot on the food chain and provide most of the energy to the arctic environment. Most of the carbon cycles through the environment like this as well.

Since the many of the permafrost soils are low in nutrients the nitrogen fixing bacteria provide a valuable input of nitrogen into the ecosystem. The mycorrhizal fungi also help the arctic shrubs to acquire nitrogen along with many other nutrients from the surrounding soil (Hobbie et al. 2009).

Vincent Warwick of the University Laval in Quebec, Canada is conducting research on the effects of global climate change on populations of microbes located in shallow lake pools, permafrost soil, and saline springs located around the region. His research helps to find out how warming of the environment will effect these populations and possibly to study a shift in population densities as they occur.

Jody Deming at the University of Washington is performing research for the National Ocean and Atmospheric Administration on how the climate change will affect the food chain of organisms that live on the sea ice shelves. Similar to the example above Demings is looking at how the population effects trickle down starting the primary producing microbes found in the ice (Deming, 2011).

Researchers hypothesized that some bacteria in arctic climates must have some sort of enzyme or protein that they use to influence the ice around them. When sixteen samples were taken and analyzed from the Vostak lake one of the bacterium present did have a protein similar to ones found in bacteria that reside in antifreeze that actually manipulates the shape of the ice crystals around the bacteria so it can maneuver through the ice without freezing and its functions ceasing to function (Raymond et al., 2008).

Edited by <Adam Klein>, a student of Angela Kent at the University of Illinois at Urbana-Champaign.