Since the “Deepwater Horizon (DWH) drilling rig explosion” incident occurred in the Gulf of Mexico on April 20, 2010, this largest marine “oil spill” in the world has imposed great dangers to the environment and to humans [1] . The oil discharged was estimated at approximately 206 million gallons [2] . Human harm, caused by “oil spills” can be acute or long-termed. Acute exposure to polycyclic aromatic hydrocarbons, such as benzene and toluene can cause skin, respiratory, and neurological issues [2] . Chronic toxic chemical enters the food chain and ultimately affects humans through seafood consumption [3] . To solve this environmental disaster, researchers have launched microbial studies centered on bioremediation using microorganisms. 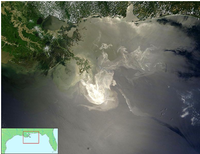 The location of DWH spill site.

Due to the “oil spills”, the polluted sites in general showed an increase in hydrocarbon concentrations followed by increases in microorganisms and decreases in the oxygen content of the water [6] . The concentration of compounds from the “crude oil” decreased with their respective distances to the spill site. The rate of the bacterial degradation process depended on nutrients, oxygen, temperature, and pressure [8] . 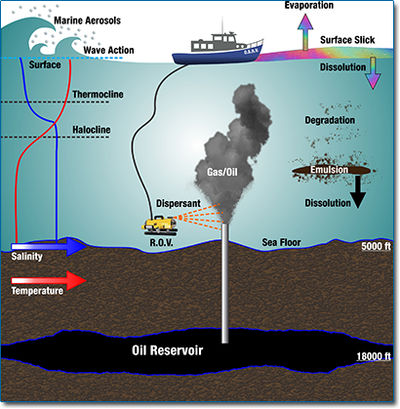 On the sea surface, hydrocarbon existed in the form of oil mousse [7] in an oxygen rich environment. Petroleum hydrocarbons were subjected to high temperature and strong irradiance [9] . Low-molecular-weight alkanes compound were vaporized quickly and most of the remaining pollutants were high-molecular-weight alkanes compounds (n>20) and “PAHs” [4] . Since the petroleum hydrocarbon was preferentially degraded aerobically [4] , oil compounds were degraded rapidly on the sea surface. Subsurface Deep hydrocarbon plumes at depths of 900−1300 m formed, consisting of dissolved gases (C1−C5 alkanes) and monoaromatics, buoyant oil droplets that retained some insoluble hydrocarbon fractions [10] . This increase in hydrocarbons as energy sources caused a blooming of the bacterial population in the deep plume horizon [11] and had lower PO43- , NO3-and dissolved O2 concentrations, and slightly higher NH4+ concentrations [13] . The temperature below 700m was always around 2-5 ℃in the Gulf of Mexico [14] . For deep waters and sediments, oil was exposed to different physical conditions with low temperature, low oxygen and high pressure [12] .

At Sea surface, evaporation and dissolution appeared to be more important than biodegradation for low molecular petroleum molecules [14] . Volatile organic compounds such as BTEX and low-molecular-weight alkanes quickly evaporated into the atmosphere leaving high-molecular-weight alkanes (n>20) and PAHs behind [4] [14] . The alkanes and PAHs were degraded aerobically by aerobic organisms involving the enzyme, “oxygenase” [8] . Often oxygenase and subsequent reactions yielded alcohols and dihydro- aromatics such as catechol which are destabilized compounds for further degradations. 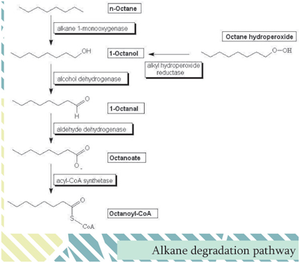 At the deep plumes horizon, the major process was illustrated to be also the aerobic degradation of hydrocarbons based on the dominance of aerobic bacteria in these ecological niches [11] . After hydrocarbon was released, the bacterial community degraded them in the following order: n-alkane, dissolved propane, ethane, aromatic HC, and Methane [11] .

In deep water sediment, both the aerobic and anaerobic degradation process presented at a much slower rates [12] . For the anaerobic process, different terminal electron acceptors could be used, such as nitrate, sulphate, and Fe (III) [16] .

In the oil mousses, aerobic bacteria that are tolerant to high temperatures and strong irradiance dominated. The majority were Gammaproteobacteria (93% “Pseudoalteromonas” ) at the spill site [12] . As oil was weathered gradually moving away from the accident site, Alphaproteobacteria such as “Erythrobacter” , Rhodovulum, Stappia, and Thalassospira became more dominant at the later stage of oil degradation [12] .

The bacterial communities in oil-contaminated sediments were highly diversified [12] .The relatively enrichment of the Methylococcus, Methylobacter, Actinobacteria, Firmicutes, and Chlorofexi bacteria resembled the bacteria communities found in nature cold-seep sediments with gas hydrates [12] . Desulfobacterium sp., a sulfate-reducing bacterium also presented in sediments suggested that there were anaerobic degradation of petroleum hydrocarbons [12] .

The “DWH oil spill” was very different from many other “oil spills” in terms of oil volume, the nature of the oil, and the environments impacted. Therefore, it was an unique model for field studies. Many Researches focusing on monitoring biodegradation and improving bioremediation arose from the “DWH oil spill” .

The field and laboratory tests also gave many valuable data for bioremediation application. In terms of toxicity studies, Kujawinski EB et al. in 2011 investigated the toxicological effects of the injection of 771,000 gallons (2,900,000 L) of chemical dispersant, “DOSS” , for the purpose of bioremediation near the sea floor at the “oil spill” site on pelagic biota and showed that the concentrations and dispersant-to-oil ratios were lower than the toxicity threshold [18] . It showed that the dispersant treatment at DWH did not likely poison bacteria and slow down degradation as some suspected.

Other studies have focused on overcoming the rate-limiting environmental growth conditions for more efficient bioremediation. As an example, Boopathy, R et al. in 2012 demonstrated that anaerobic bacteria were viable for bioremediation of oil contaminated marsh sediments. Under mixed electron acceptor conditions, there was significant degradation of oil [19] . Warr, LN et al. in 2013 focused on developing the new technique using clay flakes to more effectively apply the fertilizer to the open water spill site for bioremediation, claiming it could significantly reduce the duration of oil spill by slowly releasing the nutrients into water [17] . All of the research projects undertaken have enriched our understanding about the conditions that optimize bacterial petroleum degradations. In the future, we can develop better strategies to cope with marine oil spills.