Vibrios anguillarum, part of the Vibronaceae family, is a gram negative rod found to infect the intestines of wild and cultured marine species (Olsen et al, 1998 as cited in Hans et al, 2011) such as atlantic salmon, sea beam and rainbow trout (Toranzo et al 2005). It is the main etiological agent known to cause vibriosis (Torenzo et al, 2005).

The environment of the fish is particularly hostile during an immune response. The fish gastrointestinal tract begins secreting proteases, antimicrobial peptides and bile salts used to destroy and digest the pathogenic bacteria (Frans et al, 2011). Transferrins, which are iron-binding proteins also increase in concentration, hence reducing the availability of free iron (Frans et al 2011). Hence, the virulence factors of Vibrios anguillarum can greatly increase its chances of survival and infection in response to the fish immune response.

According to the United Nations Food and Agriculture Organization, the fastest growing food production sector is the use of aquacultures to farm fish (2012, as cited in Leung et al, 2013). However, there is also an increasing economic loss due to greater instances of fish death due to pathogens (Leung et al, as cited in FAO, 2012) and hence it is important to better understand cellular processes and virulence factors of major fish pathogen. A better understanding of V. anguillarum virulence factors can help develop drug therapeutics to target, hence reducing its survival rate. Development of virulence factor targeting medicines and strategies can ultimately help contribute to the security of a portion of the world’s major food supply.

V. anguillarum have the ability to secrete haemolysin RTX capable of lysing red blood cells, and releasing haem. Not only are red blood cells affected, but various cells of the innate immune system such as neutrophils and mast cells are all affected by the hemolytic activity of haemolysin, hence weakening the immune system. Haemolysins are encoded and regulated by the rtcACHBDE gene cluster where RTXa encodes the toxin, rtxC encodes acylase, which activates the toxin, and rtxBDE encode an RTX ABC transporter (Frans et al, 2011).

The polarized flagellin on V.anguillarum has two functions when infecting fish intestines. Firstly, the flagellin is used for motility. Induced mutations of the flA gene prevented the synthesis of flagellin A, which made V. anguillarum immotile and hence avirulent. After entry of host tissues flagellin A is not required anymore, however it begins its second function where it becomes truncated in the cytoplasm and becomes a regulator of virulence genes by decreasing their expression as they are not required on they cross the fish integument (McGee et al, 1996).

The iron uptake system of V. anguillarum is composed of several components: the diffusible siderophore anguibactin, and the anguibactin transport system. The first component is the high affinity Anguibactin siderophore (Actis et al, 1986; Walter et al, 1983 as cited in Lemos et all, 1988) which is secreted and binds to ferric iron. The second component is the iron transport complex which includes the proteins FatA, FatB, FatC, FatD and the TonB energy transducer system (Di Lorenzo et al 2004a, Stork et al 2004, 2007a as cited in in Lenios et al, 2010). FatA is an outer membrane which exploits the TonB energy transducer system. FatB is a periplasmic binding protein and FatC and FatD compose the cytoplasmic membrane permeases (Di Lorenzo et al 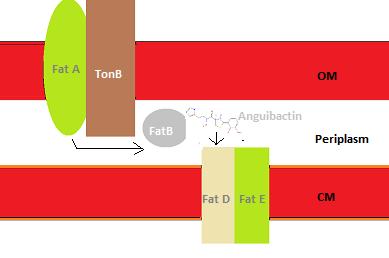 Anguibactin is secreted and binds iron. Afterwards it is transported through FatA and enters the periplasm where it binds FatB, which transports anguibactin to FatDE to pass through the cytoplasm.

The expression of certain components of the pJM1-mediated uptake mechanisms is negatively and positively regulated using antisense RNA, proteins and Fur, the universal iron dependent transcription regulator (Chen and Crosa, 1996, Lenios et al, 2010). Firstly, fatA and fatB are negatively regulated by antisense RNA called RNA-α encoded by the pJM1 plasmid during iron rich conditions when siderophores are not necessary (Chen and Crosa, 1996). RNA-α contains secondary loop structures which possibly prevent the binding of RNAase, hence increasing its stability and longevity (Chen and Crosa, 1996). It is not certain how Fur proteins initiate transcription of RNA-α, however it has been proposed that it is either an activator that binds the promotor of the RNA-α complementary strand gene, or Fur is a repressor protein that represses a repressor gene of RNA-α (Chen and Crosa, 1996).

Sigma factor 54, also known as RpoN appears to be a regulator in V. anguillarum ‘s virulence factors during times if environmental stress, such as adhesion, iron-sequestiering, and production of metalloproteases. Loss of function experiments have exhibited decreased level of virulence activity compared to wild-type bacteria. (Hao B et al, 2013)

CHOED Phage: An alternative to antibiotics?

Bacteriophages isolated from mussels and clams were incubated with V. anguillarum and tested to see if they caused Vibriosis in Salmo salar. Results indicated that the phage decreased the amount of viable V.anguillarum present in the fish tanks and also decreased the mortality rate of S.salar when compared with the control. A test in fish farm conditions showed 100% survival rate with CHOED phage and only 60% survival rate without the phage, which suggests that the phage has the capabilities of preventing V.anguillarum from infecting host. Phage is very promising alternative treatment because additions of antibiotics to the environment is known to have detrimental effects. (Higurea, 2013)

Leung T, and Bates A. "More rapid and severe disease outbreaks for aquaculture at the tropics: implications for food security." Journal of Applied Ecology. 50. (2013): 215-222.

UN Food and Agriculture Organization. The State of World Fisheries and Aquaculture 2012. (2012). Report.