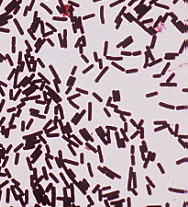 In the 1890s, Clostridium perfringens was known as Clostridium welchii. F.W. Andrewes and E. Klein linked C. perfringens to many foodborne outbreaks at the time. In 1892, the microorganism was found in a variety of diseases, some of which include gas gangrene, appendicitis, puerperal fever (infection of the placental site following delivery or abortion), and enteritis. C. perfringens is a gram-positive, anaerobic, spore-forming bacterium. Furthermore, it is a non-motile, mesophillic, encapsulated rod with square ends shaped microorganism.

C. perfringens is found virtually everywhere in nature, except in the sand of the Sahara desert, because it is spore-forming. It is common in soil, but has also been found in decaying vegetation, in the intestinal tract of humans and animals, in insects, and in marine sediment.

C. perfringens produces acetone, butanol, ethanol, butyric acid, acetic acid, propionic acid, lactic acid, carbon dioxide and hydrogen. In addition, it ferments sugars, starch and pectin. C. perfringens is the most common cause of clostridial gas gangrene; it has been known to cause 80-90% of human cases. C. perfringens is an excellent model for genetic studies of the clostridium genus due to its oxygen tolerance and fast growth rate. 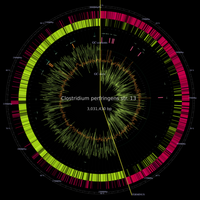 Clostridium perfringens has a single circular chromosome made up of approximately 3,031,430 base pairs with a guanine-cytosine (GC) count of about 28.6%. This is a relatively low GC content compared to that of other Gram-positive bacteria.

The genome contains typical anaerobic fermentation enzymes that lead to gas production; however, no enzymes for the tricarboxylic acid cycle or respiratory chain are present. Twenty genes were newly identified as virulence factors of C. perfringens. Also, a total of five hyaluronidase genes that contribute to virulence were recently discovered.

C. perfringens is a common Gram-positive anaerobic spore-forming bacillus. This bacterium can exist as a vegetative cell or in its dormant spore form. Like other Gram-positive bacteria, C. perfringens is composed of a cytoplasmic lipid membrane, a thick peptidoglycan layer containing teichoic acids, and capsule polysaccharides.

The spores of C. perfringens persist in the environment produce a variety of toxins and enzymes. Spores survive cooking and then germinate and multiply during storage at room and high temperatures, slow cooling, or inadequate re-warming.

C. perfringens is an obligate anaerobe; therefore, it acquires energy by performing anaerobic respiration. It uses nitrate as its final electron acceptor during anaerobic respiration. There is an increase in growth when C. perfringens is grown in the presence of nitrate, because nitrate allows more metabolite molecules to undergo substrate-level phosphorylation, which lead to an increase in energy production. C. perfringens also has all the enzymes necessary to carry out glycolysis and glycogen metabolism. Therefore, C. perfringens breaks down the sugars it produces as uses them as an energy source as well.

C. perfringens found all throughout the environment and frequently occurs in the intestines of humans and many domestic and feral animals. Spores of C. perfringens are found in soil, sediments, and areas subject to human or animal fecal pollution. It has been shown that C. perfringens is a cause of various human diseases, such as, gas gangrene [also known as clostridial myonecrosis], food poisoning, necrotizing enterocolitis of infants, and enteritis necroticans [also known as pig-bel]. It is also the cause of many animal diseases, like, lamb dysentery, ovine enterotoxemia [also known as struck], pulpy kidney disease of sheep, and other enterotoxemic diseases of lambs and calves. 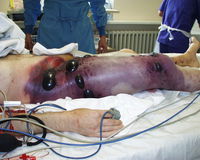 C. perfringens most often causes food poisonings that result in sudden, watery diarrhea and abdominal pain. Usually there is no fever and no vomiting. However, sometimes C. perfringens can cause a more severe infection that causes the intestinal tissue to die and results in an infection of the blood. For diarrhea and abdominal pain, there is normally no treatment; it is usually a 24 – 48 hours span of symptoms. On the other hand, for blood infection, antibiotics are used to fight off the bacteria.

Wounds that become contaminated with C. perfringens can result in tissue decay; this is known as gas gangrene. C. perfringens releases an exotoxin, known as alpha toxin, which enters the muscle through a wound and goes on to proliferate in body tissue and secrete powerful toxins. These toxins then destroy nearby tissue and produce gas at the same time. Excision is usually the treatment for gas gangrene because antibiotics alone are unsuccessful treatments.

Institutional feeding, such as school cafeterias, hospitals, nursing homes, and prisons, where large quantities of food are prepared several hours before serving is the most common circumstance in which C. perfringens poisoning occurs. C. Perfringens poisoning is one of the most commonly reported foodborne illnesses in the United States. There were 1,162 cases in 1981. For the past two decades, 10-20 outbreaks have been reported annually in the U.S. Typically, hundreds of people are affected with C. Perfringens. It is thought that many outbreaks go unreported because the implicated foods or patient feces are not tested routinely for C. perfringens or its toxin. Therefore, the Centers for Disease Control and Prevention estimate that about 10,000 actual cases of illness caused by C. Perfringens occur annually in the U.S.