A Microbial Biorealm page on the genus Emiliana 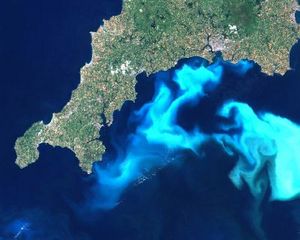 Emiliania huxleyi in waters off of Cornwall. Photo by: Steve Groom.

Emiliania is a small organism that is famous for turning huge portions of the ocean bright turquoise during its blooms. They are also known for contributing to the white cliffs of Dover because of the calcite in their coccolith cell structure. They play a very important role in the carbon cycle in the ocean because they form calcium carbonate exoskeletons that sink to the bottom of the ocean floor when they die. They are also one of the worlds major calcite producers.

Very little is known about the complex life cycle of Emiliania. But it is known that there are three types of cells involved in the life cycle of a coccolithophore, non-motile coccolith-bearing cells (c-cells), naked non-motile cells (n-cells), and motile scale-bearing swarmers (s-cells). It is thought that the s-cells do have a sexual stage where they act as gametes, though it has never been observed. But the s-cells can reproduce vegetatively.

Emiliania, like most other phytoplankton, are autotrophic. They produce their own energy through oxygenic photosynthesis. Their photosynthetic organells are chloroplasts derived through "secondary endosymbiosis," that is, ancestral engulfment of an alga that already contained a chloroplast derived from a cyanobacterial ancestor. 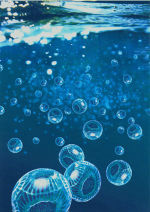 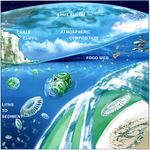 Emiliania is a marine coccolithophore that lives in cooler waters at depths of about 10-20 meters. This suggests that strong light intensities may be a factor in causing blooms to form. Blooms may also form because of low phosphate and iron levels. Emiliania generally prefers cold water, but can tolerate waters that are a little on the warm side as well. It also prefers is the water is nutrient poor, especially low CO2 concentrations, which helps with the process of calcification. They also are able to utilize dissolved organic phosphates better than most other phytoplankton.

They are a food source for certain bacteria and zooplankton, who feed on them during blooms. During these blooms they can be up to 90% of the phytoplankton in the bloom area, and the blooms can get to be 100,000 sq. kilometers, or about the size of England. These large blooms play a huge role in the earths atmosphere. The coccoltihs, rather than absorb light, reflect it which is what causes the turquoise color in the water. For a typical ocean, the proportion of photons re-emitted by the water increases from 1% when there are no coccoliths in the water, to 3% with 100 mg CaCO3/cm3 of coccoliths in the water, to 7% with 300 mg CaCO3/cm3 of coccoliths. This change in the Earth's albedo can have distinct affects on the climate. The blooms can also have an affect on the climate when it decomposes. All of the carbon that they drew out of the water, to make their coccoliths, now sinks to the bottom of the ocean, meaning that the atmosphere and the top of the ocean are no longer in equilibrium with the other CO2 levels. This draws the CO2 out of the atmosphere and into the ocean. This helps lower the amount of CO2 in the atmosphere that cause the greenhouse affect.