Flavobacterium denitrificans has flat, circular and yellow colonies. It is a facultative aerobe and an active member of the soil microbial community. It is activated in the earthworm (Aporrectodea caliginosa) gut, an anoxic and substrate rich habitat. Flavobacterium denitrificans carries out denitrificaiton, whish is the dissimilative reduction of nitrate and nitrite to dinitrogen. This process can also result in a significant production of nitrous oxide, a powerful greenhouse gas. Earthworms may account for more than 50% of the total nitrous oxide emitted form a soil they inhabit. 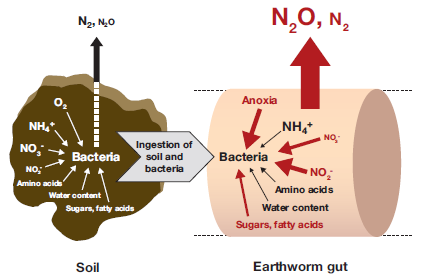 Figure 3. Hypothetical model illustrating which factors stimulate the production of nitrous oxide and dinitrogen by bacteria ingested into the earthworm gut.


Oxygen, nitrate and nitrite are used as electron acceptors but not iron(III) and sulphate. Ammonium is used as a nitrogen source. Nitrous oxide is produced as a transient intermediate during the dissimilatory reduction of nitrate to dinitrogen.

Figure 4. Diagram of the digestive system of the earthworm. The earthworm Aporrectodea caliginosa gut contains soil derived nitrate and nitrite. This habitat is anoxic, moist, pH neutral, rich in proteins and carbohydrates derived from mucus and worm feed. This may serve as substrates for the ingested. Microorganisms, including Flavobacterium denitrificans, capable of anaerobiosis are selectively activated in the anoxic and substrate-rich environment. Earthworms supplement the ingested soil micoorganisms with mucopolysaccharides that activate microorganisms. The microorganisms than secrete exoenzymes that help the worm in digesting organic matter. This is called a mutualistic digestive system.


This process of denitrification is a critical part of the nitrogen cycle. It is important to understand how different factors influence denitrification and how it is can be used to improve plant available nitrogen and reduce greenhouse gas emissions. In many soil ecosystems, nitrogen is the limiting nutrient for plant growth and it is continuously lost by denitrification (in addition to other processes). Nitrous oxide, lost through the process of denitrificaion, is among the six greenhouse gases included by the Kyoto protocol on climate change in 1997. Limiting it could help decrease the negative impact of agriculture on the environment.