Forests represent the 31% of the total land area and support more than 1.6 million people around the world. At the same time, forests are important because they are home of 80% of the terrestrial biodiversity which include plants, animals and microorganisms [1]. The interactions of the terrestrial biodiversity are integrated in the food web process. Those processes include the transfer of energy, community interactions and nutrient cycling. These process are also linked with abiotic factors as soil, water and climate and determine the productive characteristic of each niche.

The most common soil definition is "Soils as a media for plant growth" [2. However, soils have several functions that determine the ecological roles in the environment: 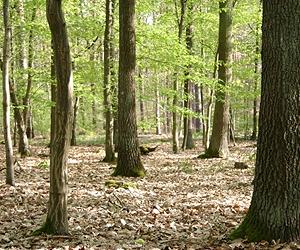 Soil formation is a pedogenic and biogeochemical process that is dependent of the translocation, biocycling and transformation of materials deposited and degraded by microorganisms on the uppers soil layer. These processes are developed along time and space, and have as final product the formation of soils with different physical and chemical characteristics.

The early soil classification made by the USDA on 1938, classified forest soils in the Zonal soil Order, as Pedalfers [2] , that are soils with the following suborder:

The Soil Science Society of America does not have a specific definition about forest soils. However, Comerford (2006) defined forest soils as a soil that has been developed under forest cover, or a forest that has been disturbed but once was covered by forest vegetation [3].

The physical characteristics observed in forest soils, are determined by the soil formation factors:climate, organisms, parent material, time and relief.

The process mentioned above, determine the type of soil that will be formed. For forest soils in particular, the principal characteristic is the development of an organic layer on the soil surface, usually referred as forest floor [3]. This particular horizon contains fresh organic materials from dead plants and animals, that are easily degraded by microorganisms, especially by bacteria and fungi. This layer is represented with the letter "O" that means organic, due to the accumulation of organic mater.As the soil depth increase, the availability of organic matter decreases, having as result a more mineral soil layer. However, the thickness of each layer varies depending of the topography, vegetation and parental material in which the forest has been established.

The transformation and translocation of organic and inorganic material by physical and chemical process along the soil profile, are the basic processes for the soil formation. 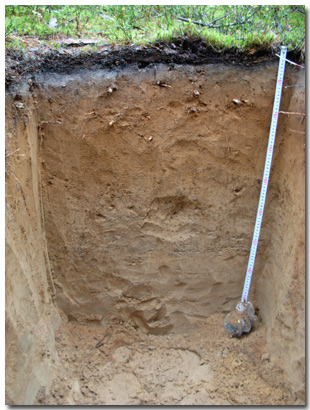 The most important role of the vegetation on soil, is the accumulation of organic matter. The tree leaves represent the most important source of carbon in the soil. The type of vegetation is also an important factor because it affects the soil acidity. For example, litter from conifer trees require more time to be decomposed, having as result a slow recycling of nutrients. On the other hand, litter from deciduous trees are easily decomposed due that they contains more less strong carbon bonds, that microorganisms can brake faster. As result, microorganisms release organic acids, that promote the soil formation by the desegregation of rocks. This process requires time, and at the long term, it will determine the thickness of the soil horizons and the fertility of the forest soil.

Temperature and precipitation regimes have a direct impact on the forest vegetation, decomposition rate and soil formation process.

Soils formed under high temperature and precipitation rates from volcanic parent material are usually characterized for having a fragile nutrient cycle. In fact, tropical forest soils have high clay content and lower soil organic matter accumulation. A good example of these, are the Tropical Rainforest which usually have low pH and low plant nutrient due to the translocation of clay particles that carried non acid cations into the soil. Some examples of these soils are the Ultisols [4] and Oxisols [5].

Forest soils developed under temperate climate, usually have higher organic matter because they have lower temperature which slow down the decomposition rate. However, these soils are highly weathered due to the seasonal temperature and precipitation rate along the year. Alfisols and Spodosols are the most common soils observed under these conditions. These soils are characterized by the accumulation of calcium carbonate and clay particles in deeper horizons, due to leaching nutrient from the parent material rocks and decomposition of litter which released strong organic acids that reduce the soil pH and with a CEC up to 35%.[7].

The microbial community in forest soil is dominated by fungi. Since most of the organic compounds in forest soils is located on the soil surface and there is plenty oxygen, fungi communities are able to extend their filaments called hyphae. Fungi are more efficient than bacteria, in terms of decomposing organic compounds. In fact, 50% of the decomposed material is transformed in fungi tissue and 94% of fungi have enzymes capable to degrade lignin, that is a important component of wood cells in trees (Sylvia, D., et al. 2005). The formation of hyphae on the forest floor, improves the plants nutrient uptake, because hyphaes have more surface area per volume than roots. (Perry,D. 1994). Which allow the plant to establish symbiotic relation with the fungi.

The relation of fungi organisms with forest soils, is important for the establishment of the vegetation. Sometimes, when forest restoration works are conducted, the tree planted is not able to growth, because the soil does not have the proper mycorrhizal [6] community to interact with the plant. This is an example of the fragile and important connection between organisms in the environment.

Bacterias have an important role in the nutrient cycling. The distribution of bacterias in forest soils is mostly determined by vegetation and soil chemical characteristics. For example, the study conducted by Hackl, E.(2004), compared the bacterial communities on six forests under different pine and oak vegetation. The results shown that Gram-positive bacteria communities, especially actinomycetes, were more abundant under conifer forests than under oak coverage. This results suggest that bacterial communities are adaptive to the soil chemistry [9].

Some saprophytic fungi and bacteria, are the the primary agents that induce decomposition. By the degradation of organic compounds as: cellulose, hemicellulose, pectin and lignin.(Sylvia,D. et al., 2005). 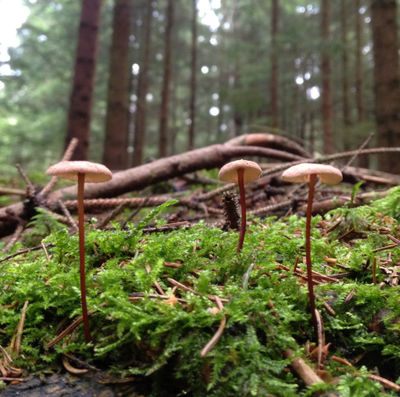 The microbial biomass composes less than 35 of the total organic carbon in soils (Schlesinger, W., 1997). In natural or undisturbed forest ecosystems, the decomposition rate humus is lower than an agricultural field. This process is due to the low management which reduce the respiration process that is part of the metabolism of some bacteria and fungi. However, depending of the the substrate quality, carbon compounds can be break down by the enzymatic action of microorganisms. That is the reason why in forest soils, the decomposition of leaf litter produces high quantities of dissolved organic carbon compounds and 5 to 40% of the total C losses may occur by leaching. However, less carbon is lost by soil erosion. This important processes reduce the decomposition rate and storage carbon in the soil

C/N ratio determine the bacteria community distribution in the soil. Carbon quality tends to be an important component of the microbial communities distribution. Johnson (2001)[10] studied different forest management and their effect on the C and N soil storage. The results shown that saw-log forest removal tend to increase the amount of carbon and nitrogen in the soil at the short term. This process is due to the rapid incorporation of small size carbon material into the soil, which allow microorganisms to decompose the carbon molecules and release the excess of nutrients to the soil. The abundance of carbon is taken by microbes which at the same time helps to the immobilization the nitrogen in the soil.

Nitrogen in soils is linked with the amount of soil organic matter, which contained around 5% of nitrogen (Brady and Weil, 2010). These organic nitrogen is not accesible for plants, that is why microbes decomposed the organic material to smaller pieces which later are release as ammonium. The process of consuming organic material and releasing inorganic compounds is called mineralization. However, in natural forest soils, this process take longer and usually is carried by a limited microbial community due to the low organic nitrogen available. That is why soil nitrogen is not considered a major N pool.

However, when the soil is disturbed, nitrifier bacteria population increases, which increase soil fertility by the making nitrate more accessible for plants. That is one of the reason why poor farmers on the Tropics had adopt the slash and burn [7] practice to enhance soil fertility. However, at the long range the soil fertility is depleted due to the disruption of the nutrient cycle.

This study is focused on how the land use change from a Tropical Rainforest to an agricultural land will impact the microbial communities. After, the deforestation and shift in the soil land use, the phylogenetic characteristic of the bacteria communities increases, but at the same time their diversity decrease along the area. The researchers suggest that microbial communities should be taken in consideration before change the land used in order to avoid losing the biodiversity within. 12

The increase in the emissions of CO<2> to the atmosphere, and high interest about climate change. These two particular situations are leading to the development of new alternatives for carbon sequestration. The new initiatives proposed includes the reforestation of non-forested areas. Researchers from the University of Michigan explain that non-forested areas area capable to sequester the double amount of CO<2> than areas that are or had some forest vegetation. 13.

This study is focused on the impact of forest soil disturbance and the effect of several N application rates. The main idea is that nitrogen influences the carbon storage in the soil. So by changing the soil chemistry, the researchers found that under N application increase the soil carbon and mineralization rate. However, it decrease the C/N ratio. As conclusion, at the long term the C/N and N mineralization depends of the addition of nitrogen along time. At the short term, the changes are due to the organic matter decomposition rate and to the stabilization of the plant community.

Edited by Tito Lavaire, a student of Angela Kent at the University of Illinois at Urbana-Champaign.