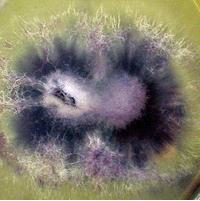 A culture of F. oxysporum displays it's purple pigmentation [2] 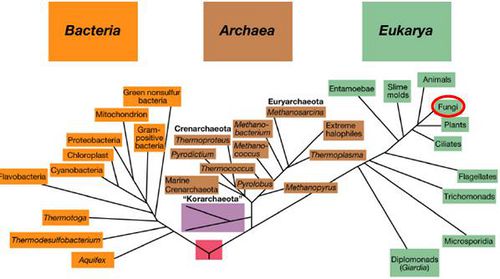 This graphic represents the location of F. oxysporum within the "3 Kingdom" model. It is a Fungi, which is in the Eukaryote kingdom 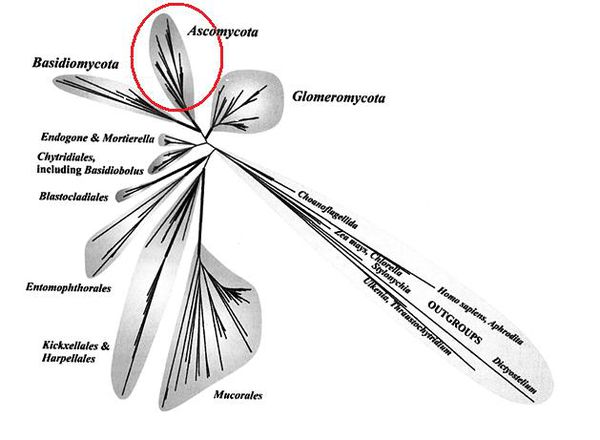 Subkingdoms/Phyla/Subphyla within the Fungi kingdom. F. oxysporum is an Ascomycota 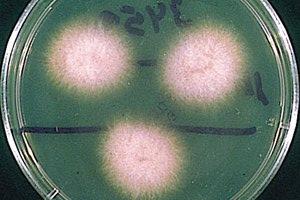 F. oxysporum colonies on Sabouraud with chloranphenicol agar. This image illustrates the coloration of the fungi. [26]

Habitat
F. oxysporum appears to be largely cosmopolitan meaning that it can be found almost everywhere, with higher concentrations of the various Formae speciales in different areas across the globe. F. oxysporum f.sp. lycopersici, which causes tomato wilt, has been found in at least 32 different countries alone [16]. Distribution maps show that this fungus has invaded North and South America, Europe, Africa, Asia, and Oceania [12]. A ubiquitous soil fungus, the optimum soil temperature for root infection is 30°C or above but infection through the seed can occur at temperatures as low as 14°C [15], although it grow optimally at 28°C [25]. Since F. oxysporum also has strains that are pathogenic to humans, the human body is a secondary habitat.

This map depicts how F. oxysporum affects 6 of the 7 continents on Earth. [28]

Significance
F. oxysporum plays the role of a silent assassin - the pathogenic strains of this fungus can be dormant for 30 years before resuming virulence and infecting a plant. F. oxysporum is infamous for causing a condition called Fusarium wilt, which is lethal to plants and swift - by the time a plant shows any outward sign of infection, it is already too late, and the plant will die. Additionally, F. oxysporum is not discriminating, they can cause disease in nearly every agriculturally important plant. To see which special forms of Fusarium affect which crops, click here. Not only is it bad enough for farmers to sustain the loss of one rotation of crops to fusarium wilt, but as a whole F. oxysporum proves to be incredibly tough to eradicate. The most effective resolution is soil sterilization, which is far too expensive for most farmers, who instead use more economical fungicides which have only limited results [13]. Also, F. oxysporum spores can survive in the air for long periods of time, so rotational cropping is not a useful control method. In sum, fusarium wilt is a financial burden to the farmer, which raises agriculture costs which ultimately increase prices at the supermarket for us, the consumers. To combat this scourge, food scientists developed wilt-resistant crops such as the Cavendish banana. The Cavendish banana was introduced to the nearly 100,000 acres of farming land in Central America which had previously been home to banana crops before being contaminated by F. oxysporum. This new crop was able to successfully survive and reproduce without wilting, apparently resistant to the pathogenic fungi.
Furthermore, F. oxysporum can be harmful to both humans and animals, with it's mycotoxins causing the diseases Fungal keratitis, Onychomycosis, and Hyalohyphomycosis [2] which are elaborated on further here. Clinical manifestations of the conditions caused by Fusarium in humans are much more likely in immuno-compromised individuals, especially those experiencing cutaneous and subcutaneous infections, inflammation, arthritis, or dialysis [2].

However, the wide range of phenotypic variation of Fusarium species makes them excellent fungal model systems. Rich strain resources (>30,000 accessioned strains) exist, providing unparalleled opportunities for studying the genetic mechanisms underpinning phenotypic diversity within and between individual species [20]. So, while F. oxysporum may seem like a harmful pest, there is also a good chance that it might open the doors of research and a new understanding of fungi life forms. 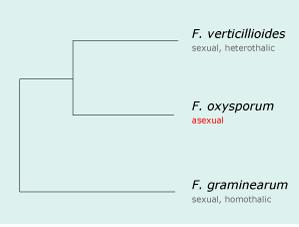 This chart shows the evolutionary biology of F. oxysporum [16]

The Broad Institute sequenced the genome of Fusarium oxysporum f. sp. lycopersici - the strain on fungi responsible for tomato wilt - and found the assembly size (the length of the complete genome sequence, calculated by adding lengths of all scaffolds together) to be 61.36 Mb, and the total contig length to be 59.94 Mb; including 15 chromosomes, 17708 protein-encoding genes, 48.4% GC content, and 117 unplaced scaffolds [22]. As can be seen in the graphic above, the genome is circular. Comparative genomics reveals mobile pathogenicity chromosomes [17]. In addition, 2 of the 100,000+ Fusarium plasmids have been sequenced: Fusarium oxysporum f. sp. matthiolae and Fusarium oxysporum f. sp. raphani which are both mitochondrial plasmids with lengths of 0.0017-0.0018 mbp and GC content of 39% [19]. This information was retrieved using whole genome shotgun sequencing (also known as shotgun cloning) which is a process in which DNA is broken up randomly into numerous small segments, which are sequenced using the chain termination method to obtain reads. Multiple overlapping reads for the target DNA are obtained by performing several rounds of this fragmentation and sequencing. Computer programs then use the overlapping ends of different reads to assemble them into a continuous sequence [18]. This process has enabled scientists to sequence full genomes with remarkable quickness and accuracy.
In 2002, the F. oxysporum was sequenced as part of a "Comparative Project" funded by the National Research Initiative, within the U.S. Department of Agriculture's Cooperative State Research Education and Extension Service through the USDA/National Science Foundation Microbial Genome Sequencing Project. This project revealed the phylogenetic relationship of 3 species of Fusarium, which is depicted in the graphic at right [16]. 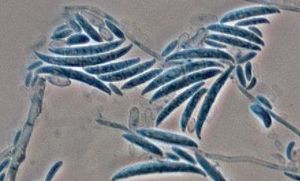 This image shows the macroconidia of F. oxysporum. These are the tiny asexual fungal spores that function as its mode of reproduction. [2] 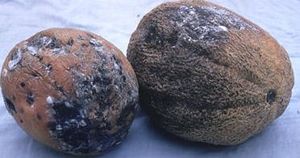 This image shows F. oxysporum in its mature stage, having spread to the external part of this melon. [24]

Since F. oxysporum is a fungi, it is a chemoorganoheterotroph, meaning that it obtains its energy from chemicals (chemotroph), uses organic substrates like lactate and acetate as electron donors (organotroph), and obtains it's carbon from organic sources (heterotroph)

F. oxysporum is capable of producing mycotoxins, which are molecules that can cause disease in humans such as Fungal keratitis, Onychomycosis, and Hyalohyphomycosis [2] which are elaborated on further here.

Interestingly, after 10 years of intensive study, F. oxysporum has displayed remarkable phenotypic stability, including mycelial growth on different culture media, sporulation, and high virulence [16]. This information suggests that this fungi is highly adaptable to different environmental conditions, which is reinforced by the fact that soil that has been contaminated by F. oxysporum will almost certainly remain so, since it is so hard to eradicate without complete sterilization.

F. oxysporum can survive non-pathogenetically as a mycelium, complete with a mass of hyphae, in soil with organic matter. It is a saprophyte, or a heterotroph that can obtain nutrients by consuming detritus (decomposing organic matter). F. oxysporum can also utilize and is characterized by three types of asexual spores:

Disease Cycle
Healthy plants are infected by F. oxysporum when the soil in which they are growing is contaminated with the fungus. The fungus proceeds to invade the plant either with its sporangial germ tube or mycelium by invading the plant's roots. The roots can be infected directly through the root tips, through wounds in the roots, or at the formation point of lateral roots. Once inside the plant, the mycelium grows through the root cortex intercellulary. When the mycelium reaches the xylem, it invades the vessels through the xylem's pits. At this point, the mycelium remains in the vessels, where it usually advances upwards toward the stem and crown of the plant. As it grows, the mycelium branches and produces microconidia, which are carried upward within the vessel by way of the plant's sap stream. When the microconidia germinate, the mycelium can penetrate the upper wall of the xylem vessel, enabling more microconidia to be produced in the next vessel. The fungus can also advance laterally as the mycelium penetrates the adjacent xylem vessels through the xylem pits [11]. 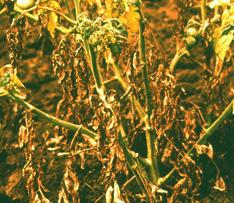 This image portrays the damage F. oxysporum can have on crops [1] 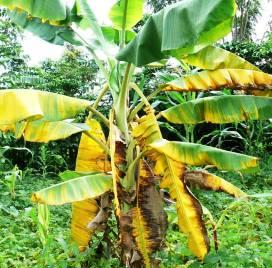 F. oxysporum tends to leave its victims a yellow or brown color [3]

Fusarium oxysporum is associated with endomycorrhizobial organisms, which can enter the cells in the roots and colozine the root system. The pathogenicity of this fungus is presumed to be determined by the fungus's ability to enter the vascular system of the plant via the root system. There are also two presumed conditions in which a strain is considered nonpathogenic. The first condition is that the fungus itself is unable to enter the vascular system of the plant and the second condition of nonpathogenicity is that the plant's immune response reacts quicker than the strain can grow. [23]

In general, the fungi manages to infect the vascular system of the plant, where it wreaks havoc. This infiltration to the vascular system affects the plant's water supply greatly. A lack of water ensues, inducing the leaves' stomata to close and the leaves to wilt. At this point you can see the outward signs of fusarium wilt, as the leaves turn yellow or brown before falling off completely. As the disease progresses, the fungi will eventually reach the fruit and alter the natural color to a yellowish hue. Often, the plant dies before reaching its mature stage [4]. At this point, the fungus invades the plant's parenchymatous tissue, and it will eventually reach the surface of the dead tissue, where it can sporulate abundantly. The resulting spores can then be used as new inoculum for further spread of the fungus [11].

Although much more well known for the aforementioned plant pathogenicity, Fusarium oxysporum has also been shown to be pathogenic to humans and animals [2]. The diseases associated with Fusarium include:

In rare cases, culture-positive human specimens have shown sporodochia (the mass of hyphae) growth. All of these cases pertained to cutaneous injuries such as burn wounds, ischemic necrosis (cell death due to blood deprivation), extensive contamination, and ischemic skin graft. These Sporodochia consisted of swollen cells that gave rise to parallel-oriented hyphae that extended upward above the surface, giving rise to a carpet of conidia on its uppermost aspect, inside the body [27].