Bacteria can acquire genes and evolve via horizontal gene transfer (HGT), using mechanisms such as conjugation, transduction and transformation [1]. The significance of HGT is thought to be the leading force behind bacterial evolution [2]. The acquisition of mobile genetic elements (MGEs) by bacteria can mediate HGT; these MGEs may include plasmids and transposons, but bacteriophages in the form of a prophage may also be MGEs [1]. Such a bacteriophage can transfer genetic information when it captures a fragment of genomic DNA from infected bacteria and transfers it to another bacteria via transduction [3].

Bacterial-encoded virus-like elements called gene transfer agents (GTAs) have been found to package random fragments of the host chromosome and transfer them to another bacteria, contributing to HGT [4]. These GTAs were originally found in the purple non-sulphur bacterium Rhodobacter capsulatus, and are found in nearly all α-proteobacteria under the order Rhodobacterales [4]; α-proteobacteria are phototrophic purple non-sulphur bacteria commonly found in the oceans [5].

The model system for studying GTAs has been the R. capsulatus RcGTA.

GTAs are found in nearly all α-proteobacteria under the order Rhodobacterales with R. capsulatus being the main organism with a functional GTA [6], but GTAs have been discovered in many prokaryotic species, including Dd1 in Desulfovibrio desulfuricans, VTA in the archaeon Methanococcus voltae, VSH-1 in Brachyspira hyodysenteriae, and the RcGTA-like GTA in Ruegeria pomeroyi [7].

The RcGTA genes occur in a cluster of 15 proteins on R. capsulatus, flanked by some conserved hypothetical protein and cysE, which is predicted to code for a serine O-acetyltransferase, an enzyme involved in cysteine biosynthesis [6]. The sequences of these RcGTA genes were included in BLAST searches and the most highly scored matches were from α-proteobacterial chromosomes, concluding that the α-proteobacteria have a well-established RcGTA-like gene lineage [6]. The majority of α-proteobacterial species contain at least some RcGTA genes, with 13 of 15 of the species in the order Rhodobacterales containing a complete RcGTA-like gene cluster, as in R. capsulatus [6].

The RcGTA particle is structurally similar to a small tailed phage, with head and tail components [6]. 5 to 8 polypeptides purified from the Y262 over-expression strain of R. capsulatus were attributed to the RcGTA particle; these polypeptides ranged in size from 13 to 40 kDa [8]. The 42 kDa Orf5 protein is the major capsid protein for the RcGTA [8]. A test to devise what the structure the major capsid protein forms was accomplished by cloning the orf5 gene from R. capsulatus into Escherichia coli and over-expressing it [8].

The purified Orf5 monomer separated into a 42 kDa polypeptide as well as a much less abundant 35 kDa polypeptide (a proteolytic fragment of the 42 kDa polypeptide)[8]. Furthermore, the Orf5 protein migrated to an apparent mass of 217 kDa, 5.2-fold higher than that of the monomer, correlating to the formation of a pentamer [8]. Also Orf5 was observed to organise into a mixture of trimers and pentamers [8].

Them the Orf5 monomers formed higher-order hollow spherical particles similar to viral proheads [8]. These Orf5 prohead structures were observed using transmission electron microscopy (TEM) and scanning transmission electron microscopy (STEM)[8]. TEM showed round, hollow particles with diameters of about 35nm, and STEM showed diameters of about 27nm [8]. Therefore these images estimate that the RcGTA capsids isolated from R. capsulatus Y262 cells (from the cloned orf5 gene expressed in E. coli) are round, hollow, and have a diameter of about 27-35nm.

The procapsid particles have a mass of about 4.5 MDa, coinciding to approximately 101 + 11 subunits [8]. This amount of subunits is inconsistent with what can be predicted with triangulation numbers, meaning that the prohead may not have a strict icosahedral symmetry but something with a different level of organisation, like a 20-sided polyhedron [8]. One must also consider that the RcGTA capsid proteins were synthesised inside E. coli and may not represent the natural R. capsulatus RcGTA structure [8], leading to a structure that cannot be predicated with triangulation numbers.

GTAs transfer genetic material in a similar fashion to transduction [9]. The RcGTA randomly packages a small amount (< 5kb) of DNA from R. capsulatus and transfers it to capsulatus strains that are capable of RcGTA uptake [8], potentially delivering new alleles or traits to the recipient [7]. Gene transfer has been observed in R. capsulatus cultures when increased resistance to rifampicin and streptomycin antibiotics developed because of the transfer of antibiotic resistance genes [10]. 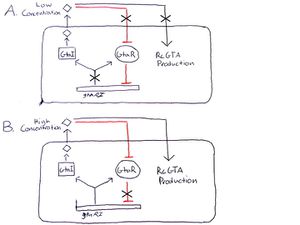 Another regulatory system is dependant on the GtaR and GtaI quorum-sensing (QS) proteins [9]. The GtaI protein synthesises two N-acyl-homoserine lactone (acyl-HSL) signalling molecules, C14 and C16-acyl-HSLs, each able to stimulate RcGTA production once a threshold concentration has been reached; but the amount of acyl-HSLs needed cannot be synthesised by a single R. capsulatus organism [9]. The GtaR protein is a transcriptional repressor protein of the gtaRI operon in the absence of bound acyl-HSLs, and when acyl-HSLs are bound, GtaR is inhibited from repressing the operon; therefore GtaR regulates the production of RcGTA by indirectly repressing RcGTA transcription when there are low levels of acyl-HSL [9]. Thus, this causes the HGT activity of RcGTA in R. capsulatus to be growth-phase dependent, being mainly expressed in high cell densities.

As a potential receptor for RcGTA, it has been found that an exopolysaccharide (EPS) associated with the capsule that surrounds many strains of R. capsulatus is involved in the adsorption of RcGTA to R. capsulatus cells [9]. This EPS is also regulated by the GtaR/GtaI QS system, and so the capsule is largely expressed at high cell densities [9].

Overall, the ability of R. capsulatus to produce RcGTA particles as well as bind the RcGTA particle to obtain new alleles is growth-phase dependent, with the maximum gene transfer occurring during stationary phase [9].

The QS regulation of the receptor allows R. capsulatus to only synthesise the receptor polysaccharide, which is very energetically expensive, when there are possible RcGTA donors nearby [9]. Also for the organisms producing the RcGTA particles to be released into the environment, the overall outcome is cell death (lysis) and so it wouldn’t be very useful to produce RcGTA particles unless other cells capable of RcGTA uptake were nearby [9].

A lot is still unknown about the full mechanism, regulation, structure and diversity of GTAs, but the potential for using GTAs as a universal vehicle for targeted drug therapy [8], or as a platform for nano-electronic and bio-electronic applications [8] drives the further investigation of these unusual gene-transferring particles.

(11) Fogg PCM, Westbye AB, Beatty JT. 2012. One for All or All for One: Heterogeneous Expression and Host Cell Lysis Are Key to Gene Transfer Agent Activity in Rhodobacter capsulatus. PLoS One. 7:e43772.