Human papillomavirus (HPV) or the “wart virus” is a virus belonging to its own family, papillomaviridae. There are more than a 100 types of HPV and as reflected in its name, species specific for humans. There are two types, cutaneous or mucocutaneous, based upon its tissue tropism or predilection for infecting specific areas of the human body. HPV currently infects twenty million Americans while another six million become newly infected each year. Today, at least fifty percent of sexually active men and women acquire HPV during their lifetime (40). This sexually transmitted disease is among the most prevalent in America, which explains the importance of understanding the disease. Yet the infection is not confined to the United States. Human papillomavirus infections are diagnosed worldwide and account for the most common sexually transmitted disease worldwide. HPVs have been associated with both cutaneous and mucocutaneous cancers prompting attempts to prevent infections using vaccines. In short, it has become a global health disease warranting every effort to control and eradicate it.

The Virology of HPV

HPV is a double-stranded DNA, non-enveloped capsid virus. It has 7900 base pairs which have 90% homology between the types (1). The base pairs are arranged in a circle which includes the codes for two key proteins known as L1 and L2 (ref.2; see insert Figure 1). These two proteins act as the “immunogene” which is required for self-assembly and the infectivity protein, respectively (2,3). The virus is transmitted between humans through breaks within the epidermis of the skin. Once the virus enters the skin, it attaches to a component of skin stem cells known as the tissue-specific heparin sulfate proteoglycans (4,5,6). Differentiation of the virus then occurs within the squamous keratinocyte (7), replicates, proliferates, and then moves to the next cell. It is the persistence of HPV within the squamous cell which poses the greatest risk for malignant degeneration. Figure 1 schematically demonstrates how the HPV enters, invades and begins the process of replication within the squamous epithelial cells of the human vagina. The invasion may produce a local self-limited infection, a chronic infection, or rarely a dysplastic response of the infected host cells which can then grow into a malignancy. 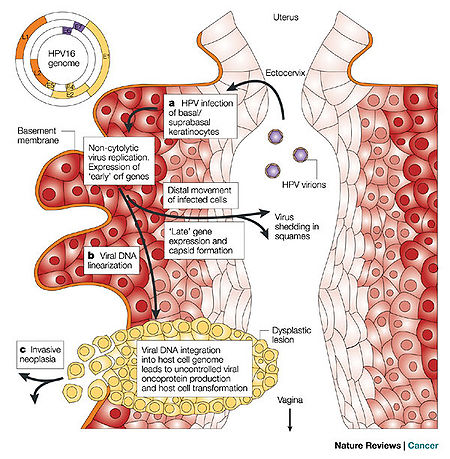 1)HPV DNA has been found within cancer biopsies
2) known viral oncogenes E6 and E7 are found in cancer material
3)genes E6 and E7 code for proteins which are growth-regulators in host cells
4)E6 and E7 gene expression have been identified in cervical cancer immortalized cell lines(12)
5)epidemiologic investigations have identified HPV as a major factor for the development of cervical cancer
6)species specific papillomaviruses cause cancer in experimental animal models including the rabbit and cow; and human neonatal foreskin infected with HPV-16 and placed in severe combined immunodeficient mice form intraepithelial neoplasms (Mandel)

Pathogenetically, evidence for the development of human cancer by HPV has been determined via the HPV-E6 gene product which in turn binds to the human p53 tumor suppressor protein as the initiating event (13-16). The p53 protein is a negative regulator of the cell cycle transformation step between G0/G1 to the S phase. By degrading the p53 protein cell growth is directly impeded. E7 appears to exert an anti-cell death (anti-apoptotic) effect in cells through mutations in the p53 protein (17, 18) by interfering with the G1 or arrest phase of the cell cycle. Thus, both genes negatively impact normal cell cycles causing an unregulated, unimpeded cell growth, i.e. cancer transformation.

The detection of various types of HPV in human epithelial cell cancers has been determined by using various molecular biologic techniques.HPV is now generally detected in human tissue by various molecular biologic techniques including in situ hybridization (ISH), Southern transfer hybridization (STH), hybrid capture (HC), dot blot (DB), filter hybridization (FH), or polymerase chain reaction (PCR) (19). ISH is sensitive and can be performed directly on infected tissue specimens. It is both tedious and less sensitive than PCR and HC and thus rarely used. DB, FH, and STH are reserved for research studies and are capable of providing separations among the HPV types. HC requires a long single-stranded RNA probe to hybridize with a whole HPV genome in solution. This test enables identification of specific HPVs and quantifies them. It currently is the only method approved by the Federal Drug Administration in the United States for detection of HPV in cervical samples. PCR remains the most sensitive method for detection. It utilizes a specific primer sequence for a specific type of HPV which as a result can be used to verify links between the virus and various types of human cancers.

All HPV infections involve the transmission from one infected individual to another through direct skin to skin contact. This may occur through skin to skin transmission through the epidermis via direct contact of a plantar wart virus with broken skin, sexually during intercourse, or orally during sexual activity or kissing. In rare cases it can be transmitted into the respiratory epithelium via an infected vaginal canal during birth. Warts of the epidermis occur in approximately 10% of all children with peak ages between 12 to 16 years (31). It is estimated that 4% of adults have non-genital warts at any given time (32). These warts can be associated with skin cancer but only rarely. Prevalence of genital warts in the United States is estimated at 1% while as high as 10% in the Scandinavian countries (31, 33, 34). Unfortunately in some studies the oncogenic strains HPV 16 and 18, can account 50% and 15% of the cases worldwide (8). More than 350,000 cases of cervical cancer are diagnosed annually (35). These same HPV types have been implicated in cancers of the head and neck. Table 1 below lists the various HPV diseases that can affect humans as well as which types of HPV goes with each disease. Respiratory papillomatosis is an unusual form of HPV disease. It presents in children between the ages of 6 and 10 years, all having been delivered as vaginal births, with signs of respiratory tract obstruction. The obstruction usually is at the larynx (voice box). Lesions can be recurrent and are difficult to treat. (36).

The Epidemiology of HPV

As one would expect from the commonality of human HPV infections, HPV is both ubiquitous and ever prevalent worldwide. A worldwide investigation of over 150,000 women with normal Pap smears (cervical cytology) revealed HPV prevalence at approximately 10% (20). Of all the regions of the world, African remains the continent with the highest prevalence of HPV infections (22% of the women examined) and incidence of the carcinogenic HPV types, 16 and 18. Figure 2 shows the prevalence of HPV infections within women worldwide based upon the data combined through several studies. Each HPV type mentioned above was assessed independently of other types (22). The forty-eight studies provided information on HPV16 and HPV18. However, the prevalence for other genotypes could only be estimated through the results from those studies testing specific HPV genotypes. Type-specific prevalence shows the presence of a given type either as a single type or combined with the presence of other types. Type-specific HPV prevalence is expressed as a proportion of all women tested for the given HPV type. 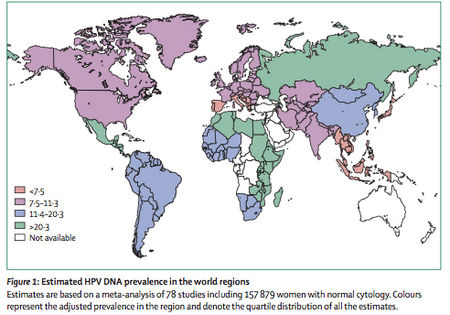 Infections are not confined to women although most studies have focused on females. Males are also at risk for HPV infections with prevalence rates between 1-70% (26). Risk factors include sexual behavior (men having sex with men vs. heterosexual men), circumcision, condom use, prior STDs (sexually transmitted diseases), race and ethnicity (27,28). Among HIV negative homosexual men the prevalence rate is approximately 50% whereas in heterosexual males, cigarette smokes and those who had intercourse with multiple female partners were associated with higher rates. Condom use was associated with the lowest prevalent rates. Again, in males like females infections were cleared within 12 months in as many as 75% of those originally infected (29). Circumcision confers an advantage for clearing the infection by almost 6-fold within 12 months versus in non-circumcised males (30).

The Treatment and Prevention of HPV

Treatment of HPV infections usually is aimed at ablation or eradication. However, cutaneous warts resolve without treatment 60% of the time within 3 to 24 months (31,37). Anogenital warts require aggressive treatments (ablative or immune modulation) but are successful only 75% of the time with recurrence rates at 25% (38). Treatments can consist of surgical removal, immune modulation or physical/chemical destruction. The latter form is the basis of most over the counter remedies which can be purchased at your local pharmacy. Podophyllin is the major ingredient in this form and is applied directly to the wart. Immune modulation by the drug imiquimod, causes alpha and gamma interferon and interleukins to be produced locally aiding in T-cell cytoxic reactions. More potent treatments are administered by licensed practitioners and include trichloroacetic acid, 5-fluorouracil, or alpha interferon injections. Surgical options include cryotherapy, laser therapy, electrocautery, and excision (Mandel). Options for therapy ought to be directed toward a trained clinician.

Prevention is currently the most successful means of controlling HPV genital infections. As stated above condom use clearly prevents transmission of the disease and lowers the risk of recurrence substantially. However, the most far-reaching means to control HPV associated cervical cancer was the introduction of the vaccine, Gardasil (Merck, West Point, PA; Mandel) in 2006. This is a quadrivalent vaccine directed against types 6, 11, 16, and 18. This vaccine is given three times at month 0, 2 and 6. A second vaccine is under production for only the type 16 and 18 HPVs. Its efficaciousness is considered remarkable and in the range of 80-90% (Mandel). This vaccine has not only conferred protection from the infection by the four types of HPVs but has prevented future warts and intraepithelial cancers in females. For males it has not demonstrated prevention of penile cancer (Mandel). Despite this success the vaccine has not met with worldwide approval (39). Current efforts for vaccine trials include vaccinating both male and female sexual partners.Figure 3 provides a schematic graph of how the human immune system responses to a primary infection(left panel), chronic infection(middle panel) and after successful vaccination(right panel).

Figure 3 demonstrates the immune response as a primary infection (panel 1), as a chronic infection(panel 2), and after exposure to an infection after innate immune modulation and successful vaccination.Taken from Einstein ME et al. Lancet Infect Dis 9:347-356, 2009; Figure 4 p.349

Human papillomavirus infections account for the most common sexually transmitted disease worldwide and have been associated with various epithelial cell cancers. For that fact alone, HPV and its inherent risks to humans has prompted attempts to prevent these infections using vaccines because treatments are not 100% successful. Gardasil, the only vaccine available for the prevention of HPV currently, is not universally accepted. Public health agencies throughout the world have tried to expand education about prevention using the vaccine as well as other preventive measures. Unfortunately the prevalence of the virus is not diminishing. Understanding the virology of the infection will be crucial in the search for more preventative techniques. The fact the disease infects both women and men all over the world as well as rare cases in children emphasizes the need for international vigilance. For more information on the vaccine itself refer to this page: Public Health Measures Against HPV.