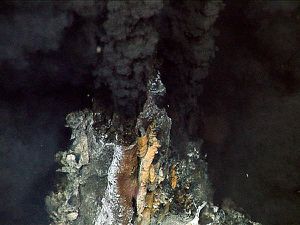 Fig. 1. Hydrothermal vent in the Gulf of California [6].

Hydrothermal vents are where fluids flow from rock fractures in the sea floor at a variety of depths, and are mainly present near volcanic and tectonic plate activity [1][2] [3]. This results in hydrothermal vents to primarily be located along ocean ridges (Fig. 1). Tectonic activity, cooling of newly formed crust, and presence of magma chambers causes convective circulation of cold seawater into the lithosphere where it is heated and enriched with nutrients such as iron and hydrogen sulfide [4]. The hydrothermal fluids mainly contain hydrogen sulfide, methane, and heavy metals, resulting in chemotrophy being the sole process for energy at depths where light is absent [2] [3]. This superheated and nutrified seawater then permeates through vents along seafloor spreading centers. Vents are characterized as one of three general types: diffuse flow, white smokers and black smokers. Diffuse vents emit low temperature (30 C), clear water. White smokers emit milky fluid approximately 200-300 C. Black smokers eject superheated (300-400 C) fluid consisting of sulfide precipitates [4]. The extreme environment found here includes pressures up to 420 atm, chemical toxicity , and fluctuating temperatures from a low of 2°C of surrounding seawater to a high of 400°C, [5]. While active vents may exist for years or even decades, the environmental characteristics such as temperature, salinity, or nutrients may fluctuate over several different time scales, ranging from seconds to years. [4] [7]. Extremely dynamic thermal and chemical gradients at vents cause segregation and limitation of organism niches over space and time [4].

Many invertebrate animals have adapted to the environment of hydrothermal vents by creating symbiotic relationships with bacteria [3]. One organism frequently studied is Riftia pachyptila, a giant tubeworm [8]. R. pachptila lack a gut and rely on bacterial symbionts for their nutrition. R. pachptila have an extensively vascularized red “plume” which extends into the water column and absorbs oxygen, hydrogen sulfide, and carbon dioxide, which the bacterial symbionts use for growth. These chemicals are transported from the plume to the trophosome where the bacterial symbionts are contained [8] [9]. Carbon dioxide is fixed by bacterial symbionts through the Calvin cycle and then organic carbon molecules are transferred from the symbiont to the host, serving as the major food source for the host [8].

The mussel Bathymodiolus azoricus also has bacterial symbionts[3]. The mussel’s gills and digestive system are locations of heavy metal accumulation [3]. Non-symbiotic free-living bacteria at hydrothermal tal resistance, with one mechanism involving heavy metal precipitation on the cell wall [3]. A similar mechanism may occur in bacterial endosymbionts in the mussel [3]. This wide array of resistant bacteria opens allows multiple bacteria to form endosymbiotic relationships with B. azoricus. Evidence shows that the bacterial endosymbionts in the gill of B. azoricus are not homogeneous [10]. The assemblage in the gill contains two different Gammaproteobacteria morphotypes. They are either sulfur-oxidizing and methane-oxidizing [11]. Although dual-symbiosis is present in B. azoricus, environmental conditions may determine the relative abundance of each morphotype based on chemical composition. This may result in an increase of available habitat due to plasticity in chemicals utilized to gain energy [10]. Dual-symbiosis is also present in other deep-sea mytelid mussels.

Alvinella pompejana, commonly known as the Pompeii worm, is an annelid polychaete that experiences a unique form of bacterial symbiosis. The Pompeii worm is an extremeophile that inhabits high temperature black smokers in the Pacific, and has external, rather than internal, bacterial symbionts [12]. The epibionts form filamentous “hairs” along the dorsal region of the worm and are fed by a mucus secretion. These epibiont communities are extremely diverse, but most of their biomass is contributed by epsilonproteobacteria [12]. It is thought that these bacterial communities may serve as a food source that is both stable and nutritious [13].

Calyptogena magnifica, or the hydrothermal vent clam, rely on endosymbiotic bacteria as their primary source of nourishment which can be acquired by vertical and horizontal transmission [15]. Hydrothermal vent clams have a reduced gut and food groove which cause them to be entirely dependent on these endosymbionts [16]. These gammaproteobacteria, Candidatus Ruthia magnifica, oxidize sulfur that is brought in by the clam's intake siphon, and are then consumed by the clam. These gammaproteobacteria genomes encode for metabolic pathways that are typical for free-living bacteria, but culturing techniques have not resulted in successful isolation of these bacteria. Vertical transmission of these endosymbionts has been found in cytosolic elements. However, these endosymbionts may be horizontally transmitted between clams, or may even change hosts within each clam species [15].

The environment present at hydrothermal vents vary considerably in temperature. At these locations temperatures can reach the upper potential limits of life. The closer to the source of heat, the smokers, the harder it is for life to be sustained. To live in such environments it takes considerable amount of adaptation. These free-living organisms are not protected by hosts, and must develop specialized mechanisms to withstand these stochastic and extreme environments. These hyperthermophiles, or heat loving organisms, have optimal growth rates between 80 and 110 oC [18]. Hyperthermophiles have unique cellular features that enable them to withstand high temperatures. Hyperthermophiles contain more glycerol ether lipids rather than ester lipids in their cell membranes. The differences between these lipid classes increases the stability of membrane hydrolysis at extreme temperatures [19]. Reverse gyrase, a unique DNA topoisomerase, causes DNA to be wound in the opposite direction. These positive supertwists induce molecular stabilization of the DNA [19]. Hyperthermophiles also contain hstones that are phylogenetically related to eukaryote core histones. Incorporation of these histones causes the melting point of DNA to increase, therefore increasing thermal stabilization [19]. Hyperthermophilic proteins enhance stability at high temperatures by changing electrostatic charges throughout the molecule. The exact changes vary between protein classes, but are result of two types of changes. Changes in surface residue charges and core ion pairs are the causative mechanism behind protein stabilization [20].

Methanopyrus is a genus of methanogenic archaea first discovered at the base of hydrothermal vents in the Gulf of California in 1989. Only one species has been identified, M. kandleri. M. kandleri grows optimally at approximately 98 C and pH of 6.5 with a 50 minute doubling time in the presence of an H2 – CO2 atmosphere [21]. Cells have even been shown to grown in temperatures reaching 122 C [22]. M. kandleri is a unique methanogenic archaea due to its terpenoid lipid membranes, unusually high concentration of a trivalent ion, cyclic 2,3-diphosphoglycerate, and presence of unique enzymes [23]. Genomic analysis suggest that archaeal methanogens are a monophyletic and that conserved Eukaryotic properties of M. kandleri are not result of a divergence closer to the Eukaryota as once previously speculated [23]. Compared to other methanogens, M. kandleri shows significantly less genetic information acquired via lateral gene transfer. This may be due to their extreme environment which limits the ability of genetic exchange with other organisms [23].

Pyrolobus fumarii is a member of the archaeal genera Pyrodictium. P. fumarii was first discovered along the base of hydrothermal vents along the Mid Atlantic Ridge during 1997 [24]. P. fumarii are non-motile have been shown to grow between 90 and 113 C, optimum at 106, and between pH 4 and 6.5, optimum at 5.5 [24]. These organisms exhibit the highest optimal growth temperature for life on earth [25]. These chemilithoautotrophic archaea oxidize hydrogen gas and reduce nitrate, oxygen, or thiosulfate to generate energy. This organism has been shown to survive autoclaving at 121 C [24]. 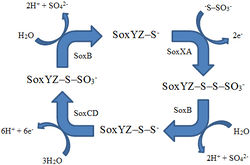 Carbon fixation requires energy, and a main energy source for chemolithoautotrophs at hydrothermal vents is hydrogen sulfide [27]. There are two pathways for sulfur oxidation [27]. The Sox pathway completely oxidizes hydrogen sulfide to sulfate using a multienzyme complex that includes SoxB, SoxCD, SoxXA, and SoxYZ [27] (Fig. 2). In the other method, sulfur is first oxidized to a sulfite intermediate and then goes down the adenosine 5’-phosphosulfate pathway, using the enzymes APS reductase and ATP sulfurylase [27].

Although a large proportion of carbon fixation is done by symbiotic bacteria, there are large populations of free-living microbes that fuel hydrothermal vent production. Epsilonproteobacteria are the dominant class of bacteria of many hydrothermal vents [29]. There are usually both mesophilic and thermophilic species present due to the temperature gradient [29]. One major genus is the chemolithoautotroph Nautilia which is thermophilic and a sulfur-reducer [2] (Fig. 3). H2 and formate are the possible electron donors for Nautilia, and sulfur is the electron acceptor, which produces hydrogen sulfide [2]. Another abundant class of bacteria is Gammaproteobacteria, with the chemolithoautotroph Thiomicrospira being the major genus [2]. Thiomicrospira is a sulfide oxidizer, meaning reduced sulfur compounds are used as the electron donors. CO2 is the carbon source [2].

Some hydrothermal vents have fluids that contain lower levels of hydrogen sulfide and carbon dioxide, which are needed by chemolithoautotrophs [31]. A main class of bacteria present at these vents is Deltaproteobacteria, a heterotroph [31]. Methanotrophs are also common at most hydrothermal vents, and shallow sea hydrothermal vents allow for photosynthetic organisms such as cyanobacteria[2].

Some hydrothermal vents have fluids that contain lower levels of hydrogen sulfide and carbon dioxide, which are needed by chemolithoautotrophs [12]. A main class of bacteria present at these vents is Deltaproteobacteria, a heterotroph [12]. Methanotrophs are also common at most hydrothermal vents, and shallow sea hydrothermal vents allow for photosynthetic organisms such as cyanobacteria [2].

Organisms adapted many of their biomolecules to survive in the hydrothermal vent environment [4]. Examples are the desensitization of cytochrome C oxidase to hydrogen sulfide, and the production of proteins that can bind heavy metals [4]. These modified molecules such as enzymes and nucleic acids may be of use in the fields of medicine and biotechnology [4]. Also of interest are exopolysaccharides that are produced to protect the cell by acting as a layer between the cell and the surrounding environment [1]. Some have been found to have antiviral and immunomodulatory properties [1].

Alkaline hydrothermal vents are hypothesized to potentially be the origin of life on Earth [32]. Arguments for this belief include that at hydrothermal vents, cell-like vesicles form, and nucleic acid building blocks such as ribose, deoxyribose, and nitrogenous bases are made abiotically [32]. Hydrothermal hydrogen is an energy source, and ATP synthesis can be driven by chemiosmosis because of the gradients in temperature, redox, and pH [32]. The existence of sulfur-modified DNA and the 1,6-anhydro bond of peptidoglycan have also been named as molecular fossils that will provide clues to how life originated from these vents [32].