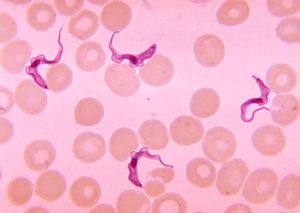 Trypanosoma forming in a blood smear from a patient with African trypanosomiasis. By Dr. Myron G. Schultz, then at the [1]


The topic of my paper is Trypanosoma brucei gambiense, and what I wish to research is not only how the virus spreads, but also what preventative methods of eliminating this illness. 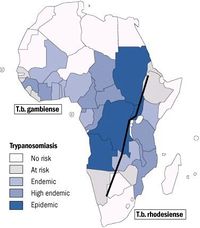 Distribution of T.b. gambiense and T.b. rhodesiense in sub-saharan Africa. [2]

This microbe is most notable for causing the feared West African trypanosomiasis. In the first stage (1-3 weeks of being infected) of West African Trypanosomiasis, the infected bite area develops into a sore or chancre. After the course of several weeks, other symptoms such as fever, rash, swelling of the face and hands, headaches, fatigue, aching muscles and joints, itching skin, and swollen lymph nodes. Furthermore, weight loss and the disruption of neurological functions occur, as the disease attacks the central nervous system. Most notably of all of these is the disease's calling card, daytime sleepiness with nighttime sleep disturbances. These symptoms continue to progress and without treatment, will ultimately end in death.[1]

The lifecycle of African Trypanosomiasis. [4]

Prevention
Currently, there are no vaccines, drugs, or other forms of prophylactic capable of preventing the infection of African trypanosomiasis. Because of this, the best means of avoiding exposure is by taking precautionary actions against the tsetse fly vector. This includes wearing long-sleeved shirts and pants, avoiding/removing the bushes that they inhabit, inspecting your vehicle before entering, applying insect repellent, and the usage of traps or screens.[3]
Treatment
Sleeping sickness is known for being difficult to treat due to the toxicity and complex administration of the drugs currently approved. As of right now, there are only four drugs registered for the treatment of human African trypanosomiasis: pentamidine, suramin, melarsoprol, and eflornithine. Pentamidine and suramin are used primarily in the early stages of infection.There is a fifth drug, nifurtimox, however, it is only effective in combination with eflornithine is special cases.[4]

Eflornithine can be used in monotherapy, but only in second stage of T.b. gambiense. Eflornithine is not, however, affective against human African trypanosomiasis that results from T.b. rhodesiense.[4]

Melarsoprol is the only treatment available for late-stage T.b. rhodesiense. Furthermore, Melarsoprol has shown to be effective for second and last stage human African trypanosomiasis resulting from T.b. gambiense.[4] 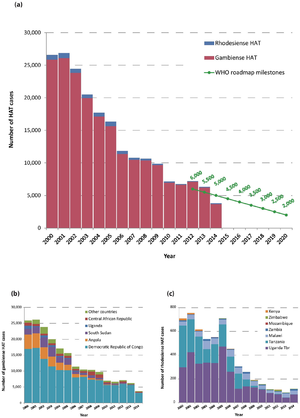 Unlike most other diseases, the WHO is actually on track to eliminate human African Trypanosomiasis sometime in 2020.[5] 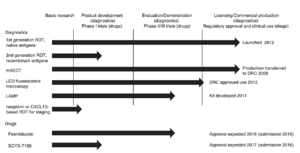 Developmental status of selected new tools for the diagnosis, treatment and surveillance of human African Trypanosomiasis that are relevant for its control and elimination, as of June 2015 (source: DNDi and FIND). [6]

Using working in conjunction with other organizations such as the Drugs for Neglected Diseases initiative (DNDi), the Foundation For Innovative New Diagnostics(FIND), and the Pan African Tsetse and Trypanosomiasis Eradication Campaign (PATTEC), the World Health Organization (WHO) was able to data compile information to create preliminary scenarios for the control and elimination of the virus.[6] Unsurprisingly, the two most valuable tools in controlling human African trypanosomiasis were reducing the population of tsetse flies/tsetse fly life expectancy. The second needed reduction method was reducing the parasite reservoir in humans through diagnosis and treatment of those carrying the disease so that tsetse flies can no longer be infected.[6] However, in order to achieve these scenarios, there was a more than necessary overhaul needed for the development of drugs and testing systems to treat and diagnose patients.

From what I've been able to gather from my research, T.b. gambiense is a largely preventable and relatively easy disease to contain due to its reliance on the tsetse fly as a vector. In this way, I found a lot of parallels in the transmission of the disease to that of malaria and Anopheles. Both diseases can be easily contained and prevented, however, due to the lack of funding and poverty of the communities affected, the disease is able to remain present. Many of the methods of prevention are also similar, but unfortunately, there are no prophylactics or vaccines for human African Trypanosomiasis.