P. aeruginosa is considered to be aerobic and is widely known as a common opportunistic human pathogen.

It is also known as a hydrocarbon-using microorganism (or "HUM bug") because it is capable of growing in things like diesel and jet fuel and causes microbial corrosion. 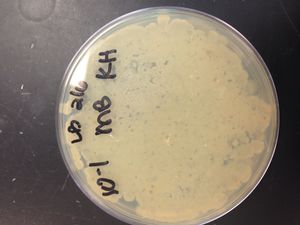 P. aeruginosa has over 5,000 genes and 6 genomes. One of the most well known strains is PAO1. Its genome also contains the largest resistance island which makes it a difficult infection to treat.

It is a gram negative coccibacillus that is unipolar. It thrives in warm, moist environments. 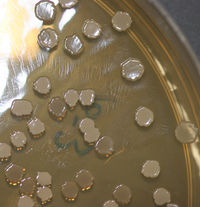 P. aeruginosa is very well-known amongst the medical community because of it's remarkable ability to cause disease. It is commonly found in patients with compromised immune systems.

In pneumonia;
It causes pneumonia in those who are immuocompromised and is resistant to many antibiotics and grows rapidly, which makes recovering from pneumonia with a P. aeruginosa origin difficult. It is a dangerous yet common respiratory infection in cystic fibrosis patients. Most children with CF will be colonized with P. aeruginosa and it will never be completely removed from their bodies. It causes thick secretions and extreme coughing fits when in the lungs. VAP infections (ventilator-acquired pneumonia) are also commonly from and invasion of P. aeruginosa.

In CAUTIs;
P. aeruginosa is also one of the common bacterial infections resulting from a patient having a foley catheter. Urinary tract infections s/p catheters and cross-contamination are often P. aeruginosa.

In Gastrointestinal infections;
P. aeruginosa is often the bacteria in NEC (necrotizing entercolitis) which is often seen in premature infants. NEC requires surgeons to remove the dead portion of the intestine and leaves babies with temporary ostomies while their bowels are healing. NEC is fatal if untreated.

Treatment of P. aeruginosa infections depend on which specific strain the patient is infected with. But often times Zosyn, cefepime, ceftazadime, ciprofloxacin, and tobramycin can be used. 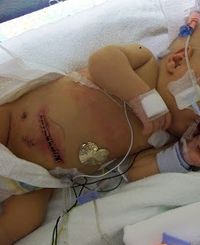