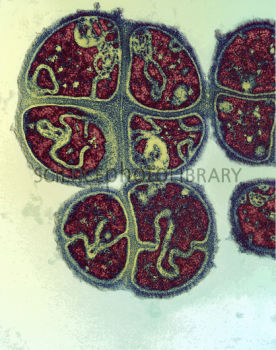 M. tetragenus is part of the Micrococcacae family. It is Gram positive and retains a spherical shape. It may be found in single or irregular groups of cells. [2] It's size varies from 0.5 to 3 micrometers in diameter. [2]This microbe is important because of its unique septation which is discussed in the following section. [3] M. tetragenus has also been shown to cause septicemia. [4] This microbe is similar to others in its group in shape and environment, although it has the unique septum and known pathogenesis. [4]

By far the most interesting feature about M. tetragenus is related to both its structure and life cylce. During septation, a cell wall and envelope form a septum that will be part of the new daughter cells. [3]. Regarding spherical cells, if the septum forms a multiple angles, the closely related staphylococci will result. In the case of Micrococcus tetragenus, a tetrad is formed with two septum are formed at right angles. [3]. The photograph included in this page shows the tetrad being formed. [2]. Micrococcus are known for their high G-C count and part of their metabolism allows them to produce acid from glucose glycerol and convert nitrate to nitrite. They are motile bacteria. [5]

The natural habitat of Micrococcus tetragenus is in humans, usually found in the nasopharynx. It was also found in tuberculous cavities of the lungs in patients with TB. [4]

M. tetragenus is a cause of pulmonary infections. [3]. It has been documented to cause septicemia, with varying symptoms, most commonly upper respiratory infections. [4]. Interesting, during WWI, there were noted to be two small epidemics among soldiers where at least 25 had septicemia. [4]. This microbe is not usually the first cause of infection and therefore is known as a secondary invader. [4]

Page authored by Samuel Goldenberg, student of Mandy Brosnahan, Instructor at the University of Minnesota-Twin Cities, MICB 3301/3303: Biology of Microorganisms.