A Microbial Biorealm page on the genus Moraxella bovis 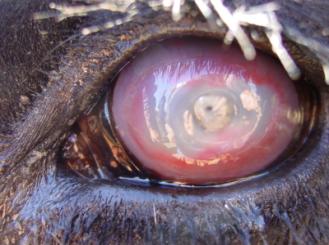 Moraxella bovis is a highly opportunistic bacterium infecting cattle herds worldwide with Infectious Bovine Keratoconjunctivits (IBK), also known as pinkeye or ‘New Forest Eye’. This disease is characterized by inflammation and ulceration of the conjunctiva causing discomfort, excessive tearing, (4) and in extreme cases, can cause ocular rupturing. Moraxella bovis proliferates exponentially in the presence of oxygen and ultra violet rays from the summer sun, thriving on the surface of cattle eyes and predisposing the eyes to infection (4,9). IBK is transferred mainly in three ways: from cattle to cattle with flies acting as virulent vectors (5), tall blades of grass while cattle graze (7), and direct contact. Increased rates of infection occur during the summer and fall season as there is a correlation with increased sunlight and fly populations during these months.

M. bovis has circular DNA. The DNA genome sequence of the bacterial strain Moraxella bovis Epp63 has been or is still being determined with 361 contigs read using Sanger method analysis (3). The largest contiguous (contig N50) DNA size is 15,826 bp (4).

Moraxella bovis is a gram-negative coccobacillus, non-motile, free-living bacteria measuring between 0.6 – 1.0 µm in diameter (2,4,8), lacking flagella with varying amounts of pili. M. bovis is able to use colonial morphology (5) as a way to adapt to environmental changes. Colonies can interchange between spreading-corroding (SC) and non-corroding (N) morphologies. The more virulent and common colony type is that of the SC form which grows in a flat cylindrical disk a few bacteria thick (5). Studies show that puncturing the agar during planting allows the bacteria to adapt and grow on the interface between the Petri dish and the agar (5). Depending on the M. bovis parental cells, colony shape, thickness, and dispersion differs relative to the speed of growth. 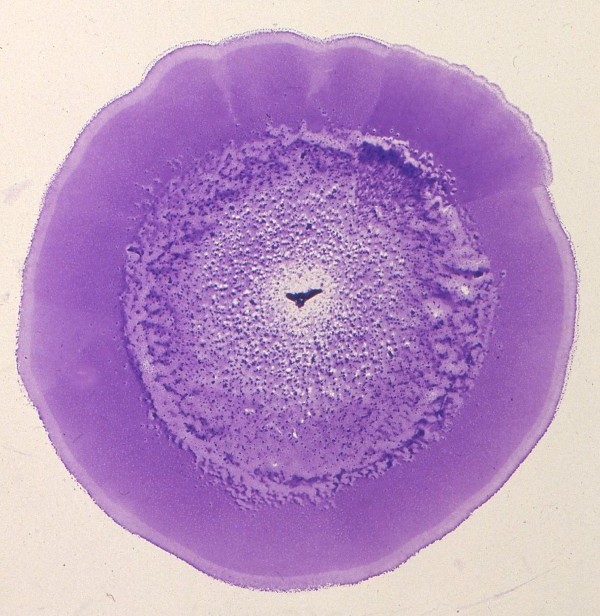 Being an aerobic pathogen, M. bovis uses oxygen as its final electron acceptor at the end of the electron transport chain (2,8). This bacterium also utilizes environmentally available glucose as fuel, as well as importing essential enzymes. Studies have shown that to support growth, Moraxella bovis isolates can bind the proteins bovine lactoferrin and bovine transferrin to use as a source of iron (10).

This nonsymbiotic aerobic pathogen prefers the moist host-habitat of the bovine ocular surface and scalar (2,5), as well as the between the interface of the Petri dish and agar layer in laboratory settings (5).

Moraxella bovis causes the highly contagious disease called Infectious Bovine Keratoconjuntivitis (IBK), also known as Pinkeye. This bacterium is rapidly spread throughout a herd of cattle in the summer time by the common black fly or by direct contact of ocular or nasal discharges (4,9). IBK is incredibly difficult to control with antibiotics or vaccinations because treatment must be administered via a subconjunctival injection or with topical ointments (1). This infection affects certain breeds of cattle more severely than others but the majority of outbreaks occur in calves (4).

M. bovis can also adapt to environmental changes such as fluctuation in nutrient concentrations or in mesophilic temperature ranges by differentiating with gene regulation (5). M. bovis is able to express two, possibly three, different phase variants by adjusting colony shapes, sizes, and concentrations. Colonies can switch between spreading-corroding (SC) and non-corroding (N) morphologies, depending on the concentration of nutrients. The first type (SC) being the primary isolate from the bovine eye (5) as well the most virulent. In studies done, shortly after a colony is isolated and grown on an agar plate, the colony type switches to N forms (5) and SC forms begin to decrease in concentration.

M. bovis is also able to use genotypic differentiation in order to express various pilin molecules (3) by expressing only needed amino acid sequences (5). A greater understanding of the bacterial virulence and pathogenicity would be possible with a better grasp on whether the pilin adjustments are selected for or are simply mutations. A theory exists that the pili aid in the secretion of hemolysin, which is the most probable cause of ocular damage, thereby allowing for M. bovis to penetrate even into the cornea and conjunctiva providing an increase in available nutrients (5) and space to grow.