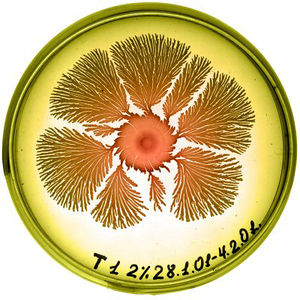 Bacteria with a tip-splitting morphotype. Image courtesy of the laboratory of Prof. Eshel Ben-Jacob of Tel-Aviv University.

In controlled lab environments, bacteria are often grown on agar dishes for ease of observation and collection [6]. Because they are grown specifically in a way that allows scientists to collect individual colonies, bacterial growth patterns in the lab are very different from growth in the wild [2]. Change in bacterial growth patterns is a direct result of change in the bacteria's environment. Since conditions can be easily controlled in a lab, it is possible to identify specific qualities of the bacteria and their growth media that affect growth patterns. In general, as environmental conditions become less favorable, the pattern of growth in a colony becomes more complex [4].

Two of the main factors that affect bacterial growth in a laboratory are media nutrient density and media hardness, the latter being a result of agar concentration. Bacteria form distinct morphotypes based on these factors, and there are usually sharp transitions between morphotypes [2]. 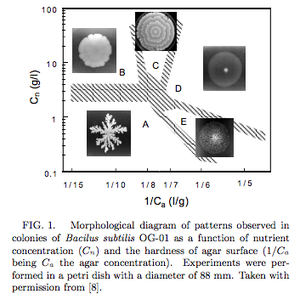 A chart of the five main morphotypes of bacteria on agar plates, depending on agar and nutrient density. Taken from Modelling of spatio-temporal patterns in bacterial colonies by Lacasta et al http://arxiv.org/abs/cond-mat/9904367

Agar is a polymer made of polysaccharide agarose and agaropectin. It is used in bacteria labs as the gelling agent in media for agar plates. Growing bacteria on gel allows for researchers to collect individual colonies much more easily than if they were grown in a liquid medium. The hardness of a gel medium increases along with it agar concentration, and bacteria move more slowly through hard gel. As agar density increases, the width of branches found in fractal patterns of bacterial growth is thinner. If the concentration of agar is very high and the solution is very hard, then the bacteria cannot move. The colony grows in one spot, and grows radially when new bacteria are physically pushed from the center. [4]

A medium that has a high nutrient level and a moderate concentration of agar will cause bacteria to form a pattern of concentric rings originating from the center. These rings are formed by alternating migration phases, in which the colony moves rapidly, and consolidation phases, during which the colony does not grow. [4]

Diffusion-limited aggregation (DLA) is a growth model used to predict bacterial growth. It creates complex, multi-branched forms, and can be applied to any system where diffusion is the main method of particle transportation. DLA can be observed in bacterial growth on agar plates, in dendrites, dust balls, electrodeposition, and mineral deposits. [9]

A DLA pattern begins with a seed molecule at the origin of the lattice. A "random walker" molecule diffuses from far away in a random pattern of motion. It stops once it reaches a space adjacent to the seed molecule, and another random walker is launched. In a DLA lattice, a molecule that sticks out of a main branch will be emphasized by new growth, not be rounded or smoothed over. Nodes are more likely to catch wandering particles because they three facets available for growth, compared to a molecule in the branch, which only has one available facet. [5]

The communicating walker model is a variation on DLA used to explain how bacteria expand the boundary of their wetting fluid to move into previously unoccupied areas. In this model, the random walker is a particle made up of 1,000–100,000 bacterial cells located on the surface of the media. The walker's metabolic state is fueled by nutrients from the media, and is used to drive bacterial activities and metabolic processes. In a high concentration of nutrients, the internal energy increases until the walker divides, spreading bacterial growth. If there is not enough food for necessary activities, the internal energy of the walker drops to zero, and it is immobile. When active, walkers move in a random pattern, but are confined within the boundaries of the wetting fluid. If the walker attempts to make a movement that would put it outside the wetting fluid, the movement is not performed, but a count is added to that segment of the wetting fluid. Once the number of attempts on that segment reaches a certain threshold, the envelope is pushed out into the new area. The threshold bacteria need to meet to propagate the envelope is directly related to agar concentration, as harder agar requires more attempts to breach [2].

Chiral patterns in bacterial colonies can be explained using the random walker model and assigning each walker an orientation to represent cellular orientation. After every step, the walker rotates to a new orientation according to its assignment and takes a step forwards or backwards [2]. 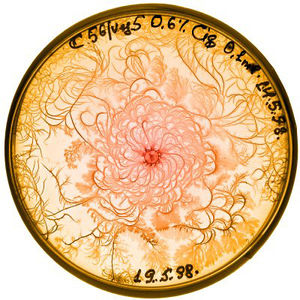 An agar plate demonstrating bacteria with strong chirality. Image courtesy of the laboratory of Prof. Eshel Ben-Jacob of Tel-Aviv University.

Length of cells and handedness of flagella also affect how patterns form. Specifically, they both contribute to chiral patterns of growth. Chirality is observed when bacteria form swirling, hurricane-like patterns on an agar plate. Cells that grow in a chiral pattern are longer than cells that grow in splitting, branched patterns, though the mechanism is not yet understood [1].

Chirality relates to symmetry, and a chiral patterns are partially a result of flagella "handedness." If a bacterium's flagella favor movement to the right or to the left, it cause will the colony's pattern to go in either a clockwise or counterclockwise direction [1].

Bacteria cooperate when cells perform actions that benefit other cells or the entire colony, and these actions are selected for [8]. Bacteria have developed cooperative behavior to cope with difficult environmental conditions. Bacteria communicate between individual cells and with the entire colony in order to cooperatively form patterns [2]. Generally, a higher lever of cooperation is observed when conditions are less favorable, such as in high-agar or low-nutrient media [4].

Bacteria colonies can be through of as multicellular organisms for the purposes of identifying patterns of growth [1]. Bacteria are able to change the morphotype of their entire colony (for example, from branching to chiral) within a time period as short as 48 hours in order to better suit their environment [2]. The ability of the colony to adhere to one morphotype and to transition completely to another are both characteristics of cooperative multicellular behavior and intercellular communication.