International effors to address Plasmodium falciparum, a protozoan parasite that causes malaria, have been ongoing since the 1940s and 1950s12. Over half of the world's population is at risk for getting infected with Plasmodium falciparum, thereby contracting malaria1.
Malaria is a deadly disease and is estimated to be endemic in over 100 different countries1. It is also the cause of approximately one million deaths every year1. 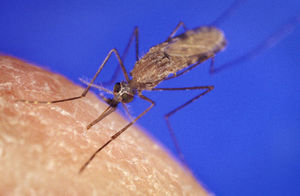 This image shows a female Anopheles gambiae mosquito feeding on the blood of a human. The picture was taken by an employee of the Centers for Disease Control and Prevention. [1]

The main vector for the spread of the Plasmodium falciparum parasite is mosquitoes2. There are many types of mosquitoes, but only a subset suck blood; of those, only some species are malaria transmitters. The mosquito species Anopheles gambiae (pictured at right) is one of the most efficient malaria vectors known because it transmits Plasmodium falciparum2.

The Plasmodium falciparum parasite population requires both human hosts and mosquito vectors in order to perpetuate. The life cycle of P. falciparum, depicted at the left, occurs as follows:10

A diagram published by the Centers for Disease Control, illustrating the Plasmodium falciparum life cycle. [2]

Mosquitoes acquire the P. falciparum parasite at first by ingesting blood from an infected human. The parasite reproduces when it enters the mosquito gut, and spreads to its salivary glands. When a mosquito punctures the skin of a human, the Plasmodium falciparum parasite enters the bloodstream by being released from the salivary glands of the mosquito. Upon entering the bloodstream, the P. falciparum is in sporozoite form. The sporozoites make their way to the liver, where they infect liver cells and multiply. They are then released into the bloodstream as merozoites, where they can infect red blood cells and reproduce asexually. As the cycle continues, infection spreads from human to human.

Plasmodium falciparum can cause behavioral changes in the mosquitoes that carry it.4 A mosquito that has acquired the P. falciparum parasite, is more inclined to feed off of a greater number of individuals in a night, and suck more blood in a single feeding than a mosquito without the parasite. This phenomenon increases the ability of Plasmodium falciparum to spread quickly through mosquitoes.

There are no effective vaccines for malaria, since infected individuals don't obtain complete immunity to the infection. Any long-lasting immunity to malaria usually requires repeated exposure to the parasite2. The difficulty in creating any effective immunization is due to the parasite's ability to change the antigens it presents, which are the targets for protective antibodies2. The P. falciparum genome actually encodes fewer enzymes and transporters than other free-living eukaryotic microbes, but it encodes a high proportion of genes dedicated to evading immune responses and host-parasite interactions 3. There are drugs which have been used to effectively treat malaria after an infection has already occured. These include chloroquine, primaquine, and artemisinin-based combination therapy (ACT)2.

Since is not possible to completely immunize at-risk individuals, the focus of malaria prevention is on reducing or controlling the spread of the disease. Research on the microbial interactions of Plasmodium falciparum and its vector, Anopheles gambiae, reveals possible approaches for malaria control, including use of the natural mosquito immune response, altering mosquito breeding environments, and the introduction of new bacteria to mosquitoes. 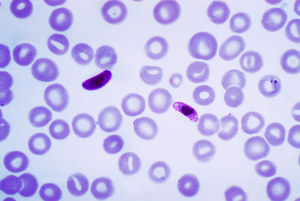 This photomicrograph from the Centers for Disease Control depicts the Plasmodium falciparum parasite only a few minutes after a mosquito ingests the parasite's gametocytes. These gametocytes trigger an immune response in A. gambiae mosquitoes.[3]

The environment in which mosquitoes breed is influential in tandem with the natural mosquito immune response, against Plasmodium falciparum infections7. The variety of bacterial flora in different A. gambiae mosquito guts is a direct result of their breeding sites, and the composition of the gut microbiota inside mosquitoes has been shown to directly impact their vectorial capacity78. Mosquitoes that have had their gut bacterial flora removed with antibiotics are more succeptible to infection by P. falciparum than those whose gut flora remain in tact8. The presence of microbes in a mosquito's gut help to create immune cells including anti-Plasmodium factors which may inhibit the development of Plasmodium falciparum8..

Introduction of Wolbachia Bacteria to A. gambiae 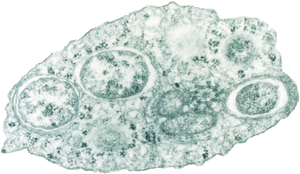 The presence of Wolbachia within an insect cell is shown by a transmission electron micrograph. [4]

Malaria is a persistent and dangerous infectious disease. By studying the most dangerous and influential strain of malaria-causing parasite, Plasmodium falciparum, researchers have been able to better understand the mechanism of spread through Anopheles gambiae, and discover new possible approaches for malaria control. As details are revealed about the specific mechanisms of the mosquito immune system, more control strategies present themselves. The viability of the use of the innate mosquito immune responses, the modification of environments in which mosquitoes thrive, and the artificial introduction of bacteria to mosquito populations in the fight against Plasmodium falciparum are unclear as of yet56789. Further research and testing is needed to discover effective control methods that can be implemented on large populations and prevent devastating malaria outbreaks in the future.


Edited by Lydia de Pillis-Lindheim, a student of Nora Sullivan in BIOL187S (Microbial Life) in The Keck Science Department of the Claremont Colleges Spring 2013.