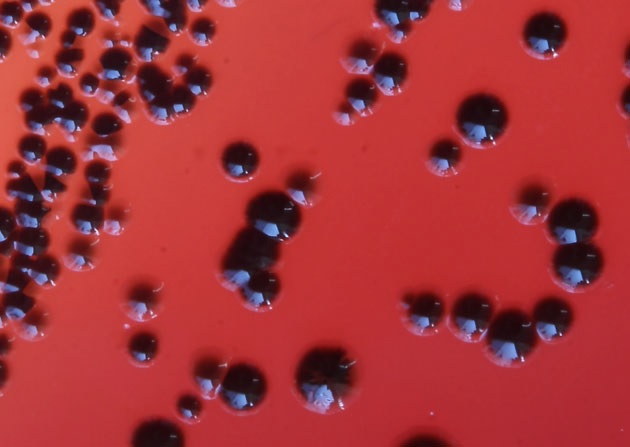 P. gingivalis colonies grown on blood agar.[1] Heme from the media is oxidized by the bacteria to produce hemin which accumulates on the cell surface producing a characteristic black pigment after about 7 days of anaerobic incubation.[2]

[2] P. gingivalis bacteria are Gram-negative, obligately anaerobic, non-motile, and non-sporeforming. Morphology can be short rod-shaped, or in broth culture, coccobacilli 0.5 µm by 1-2 µm in size. On solid media, colonies are generally smooth, shiny and convex. On blood agar medium, they darken within a week due to the take-up of heme which is oxidized into hemin which accumulates on the cell surface. This characteristic colony colour which we describe as black is how the genus name Porphyromonas was derived, from a Greek word for "purple".

In humans, P. gingivalis is most associated with the subgingiva of the oral cavity where it forms part of the biofilm that is dental plaque, causing the painful inflammation of periodontal disease, eventually leading to tooth loss.[10] Periodontal disease affects 10–15% of adult worldwide.[11] 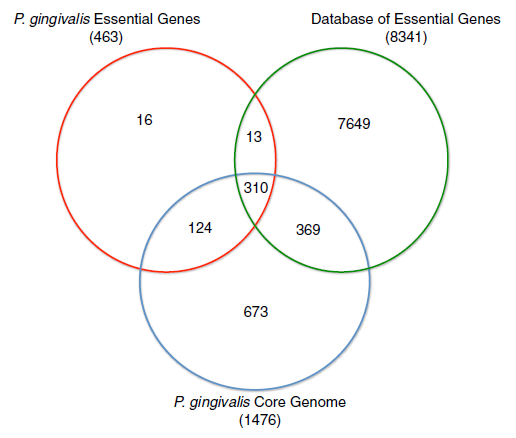 Comparisons and overlap of essential genes and the core genome of P. gingivalis type strain ATCC 33227 together with the entire curated Database of Essential Genes[12]

The whole genome sequence of P. givivalis type strain ATCC 33227 was determined in 2008 by Naito et al.[13], deposited as Genbank accession AP009380.[14] The genome comprises a single circular chromosome is 2.35 million bp in size, averaging 48.4% G+C content, and is without a plasmid. Coding sequence coverage is 86.1%. The 2090 protein coding sequences identified have an average length of 970 bp.[13]

Mutagenesis experiments have identified 463 genes essential for in vitro viability for strain ATCC 33227, and of those, 424 are contained within its core genome of 1476 genes.[12]

According to the "mouse subcutaneous soft tissue abscess model", AATC 33227 is classified as a "less virulent" strain. [13] This property lends itself to comparative studies against the "more virulent" strains in order to identify their virulence factors. Naito et al. performed a genomic comparison analysis between the AATC 33227 and the "more virulent" W83 strain.[13] Both genomes contain 53 tRNA genes and 4 rRNA operons. Various types of mobile elements are present in both strains, including insertion sequences, miniature inverted-repeat transposable elements (MITEs) and conjugative transposons. Sequence alignment shows that extensive rearrangements have taken place between the two strains to produce strain-specific coding sequences (CDSs) 60% specific to ATCC 33277, 68% specific to W83. Gene similarities to other bacterial species such as Bacteroides fragilis suggests that horizontal transfers have taken place.

The Gram-positive P. gingivalis has an outer capsule which varies in chemical composition and thickness between strains. The capsule seems to serve two main roles. Firstly, the capsule may be necessary to facilitate attachment to other cells within a biofilm.[15] Secondly, a thicker capsule can reduce phagocytosis by leukocytes.[16]

The fimbriae of P. gingivalis are the major determinants of adhesion, and are well characterized.[10] There are 3 types, which are are up to 3 µm long and 5 nm wide.

P. gingivalis is non-motile, anaerobic and asaccharolytic (i.e. unable to catabolise carbohydrates). Gingipains are a group of cystein endoproteases peculiar to P. gingivalis on which it is highly dependent to gain nutrients from host cell stubrates.[17]

P. gingivalis is part of the predominant human oral microbiota. Its specific niche is the periodontal pocket or sulcus below the gumline, the crevice between the tooth and the gingiva (gums).[18] P. gingivalis relies on the presence of "primary colonisers" to establish an early biofilm.[19] Typically, these are Gram-positive streptococci, which express receptors specific to the acquired pellicles that cover the tooth surface. Secondary colonisers such as P. gingivalis then colonise that existing biofilm in various spatial and temporal manners which are often co-dependent. For P. gingivalis, a key role is played by the long rod-like Fusobacterium nucleatum which acts as a "bridge" between the early and late colonisers such as P. gingivalis which have receptors that attach to F. nucleatum.[20][15]

Secondary colonisers of biofilms are predominantly Gram-negative and anerobic, as is P. gingivalis, due to the environment inside a growing biofilm often being oxygen-limited. Further compounding this factor is the oral niche of P. gingivalis, i.e. the periodontal pocket, which is itself is not an oxygen-rich locale.

In the polymicrobial communities which are oral biofilms, P. gingivalis and Tannerella forsythia are associated together during both initial and advanced periodontitis in adults.[18] Other types of synergy involve viruses such as human cytomegalovirus (HCMV) and herpes simplex virus (HSV), where coinfection with P. gingivalis occurs in a severe and highly aggressive form of periodontitis.[21]

Secondary colonisers of biofilms are typically very pathogenic, and P. gingivalis is no exception. P. gingivalis is a major contributor to periodontitis.[22] The subgingival plaque formed induces a host immune response of inflammation of periodontal tissue, which can escalate, ultimately leading to destruction of the periodontal ligament and alveolar bone.

Until 2012, experiments to determine the essential genes of P. gingivalis had not been performed because available transposon systems of the time were limited in their ability to knock out genes. Klein et al. adapted a Mariner transposon system in order to create an insertion mutant library.[12] The insertion locations were determined by NextGen sequencing and were analysed in silico. This novel technique facilitated the putative identification of essential genes and provided greater capacity to understand the bacterium's metabolic pathways.