Myxococcus xanthus is a gram-negative, rod-shaped bacterium, prevalent in soil environments, that exhibits extensive social behaviour [1]. When nutrients are scarce, bacteria aggregate into fruiting bodies that form spores. When adequate food is present in the environment, however, M. xanthus cells collectively swarm and prey upon other organisms. This mechanism of predation is a highly organized system involving sensing, moving towards, and lysing prey [2]. 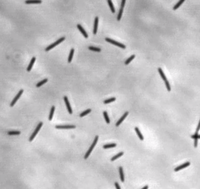 Myxococcus xanthus uses a frz signal transduction system to control its directed movement towards prey [3]. This frz system is similar to the Che chemotaxis system in E. coli, and frz gene mutants exhibit similar characteristics to well-known che gene mutants in the E. coli system. In M. xanthus, however, chemotactic activity is controlled by reversing direction of gliding motility, rather than by switching direction of flagellar rotation [4].

M. xanthus cells cannot sense prey colonies until direct cell-cell contact is made. There is no recognition of prey cells even at very short distances, but when contact is made, the M. xanthus cells began to alter their behaviour. The frz signal transduction system is also responsible for keeping the M. xanthus cells in the vicinity of their prey after contact has been made and feeding is underway. When cells start moving away from the source, the frz system senses this and induces a reverse in direction to keep them in contact with the prey colony [3].

M. xanthus uses what is referred to as the “wolf pack” approach to predation [5]. Cells usually exist as biofilms consisting of a layered arrangement. Once prey is sensed, the cells cluster into organized groups known as swarms, which then invade prey colonies [2].

Myxococcus xanthus swarms utilise a behaviour known as rippling during predation. It is induced when M. xanthus makes contact with prey or other food sources. Rippling is also observed during fruiting body formation, but research by Berleman et al. [6] demonstrates that it is generally a predatory mechanism and is necessary for efficient predation. During rippling, cells accumulate in aggregates containing ridges and troughs, and move in a manner similar to water-like ripples [7]. These ripples were coined “accordion waves” because they reflect off each other when they collide, causing each wave crest to oscillate with no net displacement. This is due to intercellular signalling during wave collision that causes changes in direction in all the cells of the swarm. [8]. Rippling behaviour has physiological benefits during predation because it retains M. xanthus cells in the area of their prey for a longer time, by decreasing random drift and increasing organized alignment [9].

Directed movement of Myxococcus xanthus relies on the reversal of direction. M. xanthus cells reverse direction on average every 7 minutes. Net movement results when the intervals between the reversals vary [4]. During predatory rippling, this allows the swarm of cells to increase its expansion in the direction of prey, because more of their potential velocity is oriented towards the prey as the reversal frequency decreases. [10]. Varying reversal rate of individual cells and therefore of the swarm is critical for movement in a particular direction.

Killing and Digestion of Prey

During predation, Myxococcus xanthus feeds by causing lysis of prey cell envelopes, and then extracting cytoplasmic contents to digest for carbon, nitrogen, and energy [11]. It is capable of killing prey organisms by collectively secreting both antibiotics and lytic enzymes. The lytic enzymes produced include cell wall cleaving enzymes such as proteases, peptidases, nucleases, and lipases [12]. Some of the antibiotics produced are bactericidal, and some only halt growth of prey organisms making them easier to lyse using other compounds [13]. 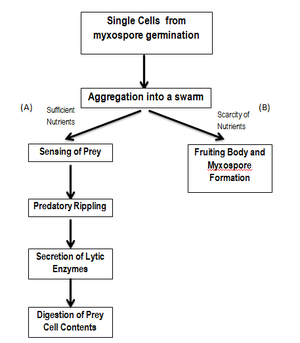 Myxococcus xanthus social behaviour in the presence of sufficient (A) and scarce (B) .nutrients. Image adapted from Zusman et al. [2]

Predation by M. xanthus is affected by many variables in the environment, such as surface solidity, and density and species of prey colonies to name a few. Higher density of prey colonies greatly increases the number of patches encountered and attacked by M. xanthus. Physical structure of the environment also affects predation, making it easier or harder for predators to move; increased surface solidity was found to increase M. xanthus predatory efficiency. M. xanthus was also shown to have different predation rates for different prey types, which may be due to different mechanisms of lysis and movement used for different species, as well as the ability of some prey species to secrete inhibitory chemicals. However, although ecological variables affect rates of encounter and attack of prey, rates of killing of prey cells once patches were encountered are largely independent of these variables [14].

The predatory behaviour of Myxococcus xanthus is potentially beneficial to medical and pharmaceutical advances. Some of the antibiotics produced by M. xanthus to kill their prey have the possibility to be useful as antibiotics for therapeutic use, and this may be an interesting field for further research [15].

(4) Blackhart BD, Zusman DR. 1985. “Frizzy” genes of Myxococcus xanthus are involved in control of frequency of reversal and gliding motility. Proceedings of the National Academy of Science USA. 82: 8767-8770.

(15) Rosenberg E, Vaks B, Zuckerberg A. 1973. Bactericidal Action of an Antibiotic Produced by Myxococcus xanthus. Antimicrobial Agents and Chemotherapy. 4: 507-513.