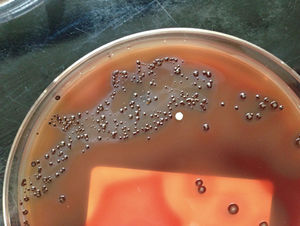 The mouth is the home of a diverse, abundant and complex microbial community. This highly diverse microflora community resides on the various surfaces of the normal mouth. Rather than a passive relationship with the host, these resident microflora play a positive role in normal development of the host. A dynamic equilibrium exists between the normal microflora and the innate host immune system. The host immune system is highly efficient and constantly monitors microflora levels in order to prevent these normally benign resident microflora from invading oral tissues. When certain microflora colonize and increase, they trigger an over-aggressive response from the immune system and increase the incidence of many diseases including but not limited to oral infections. One specific type of bacteria that is part of the normal oral flora but leads to disease when it infects the local tissue is Prevotella nigrescens. (Figure 1)

Studies focused on the characterization of these two distinct strains revealed that both P. intermedia and P. nigrescens play a role in the pathogenesis of periodontal disease. Periodontal disease is a synonym for periodontitis. Periodontitis is a set of inflammatory diseases affecting the tissue that surround and support teeth. P. nigrescens causes periodontitis by colonizing on the tooth surface and triggering an overly aggressive immune response, which is perceived as inflammation of oral tissue. More recently, P. nigrescens has also been found to be associated with signs of carotid atherosclerosis even in patients without periodontitis and with endodontic infections.[2] [3]

As more information on the pathogenesis properties of P. nigrescens was uncovered, there was a demand to find a treatment. Under this pressure a potential alternative treatment, to antibiotics, for P. nigrescens was found in the use of bee glue.[4]

Previous studies suggest that P. intermedia is more often found in periodontal sites whereas P. nigrescens is more frequently found in healthy gingivae. However, P. nigrescens have been implicated as a major periodontal pathogen as well. It is important to note the site specificity and pathogenicity of P. nigrescens remains unclear, suggesting that it is yet early to draw conclusions from the current findings.[3] [4] Overall, the majority of studies up to date show that there are increased levels of P. nigrescens in oral diseases and therefore implicating P. nigrescens as an oral pathogen but further research remains to be conducted to confirm these findings.

P. nigrescens was initially assumed to be a genotype of P. intermedia.[1] P. intermedia (formerly Bacteroides intermedius) is a gram-negative, obligate anaerobic rod. It is often isolated from subgingival plaque of humans with periodontal disease and from other oral and non-oral infections.[18] [19] Studies previously showed that there were two different types of P. intermedia.[20] Since there was a suggested association between only one genotype of P. intermedia and periodontal disease, there was a strong need for reliable tests to differentiate between the two proposed species. Now we know that both P. intermedia and P. nigrescens are implicated in the pathogenesis of periodontitis. But at the time, the importance of differentiating between the two strains was for diagnosis purposes.

Identification of samples as either P. intermedia or P. nigrescens were made based on multilocus enzyme electrophoretic profiles, surface biotinylation, and PCR ribotyping to name a few assays. Sodium dodecyl-polyacrylamide gel electrophoresis (SDS-PAGE) of whole cell samples show that P. nigrescens have 31 and 38 kDa proteins that are not present in P. intermedia.[5]

In multiple studies, sodium dodecyl-polyacrylamide gel electrophoresis (SDS-PAGE) of whole cell samples showed that P. nigrescens have 31 and 38 kDa proteins that are not present in P. intermedia.[5] [22]

Multilocus enzyme electrophoresis is based on the principle that mutations in genes encoding bacterial metabolic enzymes can be detected by differences in electrophoretic migration patterns of the enzymes.[21] The use of malate dehydrogenase and glutamate dehydrogenase resulted in unambiguous separation of the two DNA, P. intermedia and P. nigrescens. P. nigrescens strains usually produced only one slowly migrating band while the P. intermedia strains produced either of two fast-migrating bands corresponding to the alleles coding for malate and glutamate dehydrogenase respectively.[22]

Further characterization by surface biotinylation of cells from P. nigrescens revealed that the 31 kDa protein, visualized on the SDS-PAGE, is on the surface of the protein. Although no further research has been done on the 38 kDa protein, this protein may be of further help to distinguish both species as it stained strongly only in P. nigrescens.

P. intermedia and P. nigrescens also differ in localization. P. nigrescens was almost three times more frequently isolated from infected root canals than P. intermedia.[3] This discovery emphasized the importance of differentiating between the two strains. Considering that the two strains of bacteria were found it is reasonable to say that they play different roles in the pathogenesis, if at all, of periodontitis.

However, identifying the two strains using methods such as SDS-PAGE, multilocus enzyme electrophoresis, ribotyping, and arbitrarily primer PCR (AP-PCR) are either time-consuming or have low levels of reproducibility. A recently developed method, PCR ribotyping, is expected to amplify the 16S and 23S spacer regions of bacterial rRNA genes by PCR.[6] [15] It generates simple banding patterns that allows comparison between separate PCR amplifications. Since PCR ribotyping amplicons smaller than 600bp were poorly reproduced, higher discriminatory assays were run by using a combination of PCR ribotyping and AP-PCR fingerprinting. The combination assay identified seven types within the P. intermedia strain and ten types within the P. nigrescens strain, all of which were differentiable by a combination of their band patterns and DNA fingerprints. (Figure 2)

In short, these results demonstrate unequivocally that strains previously placed in P. intermedia are actually members of two genetic groups. 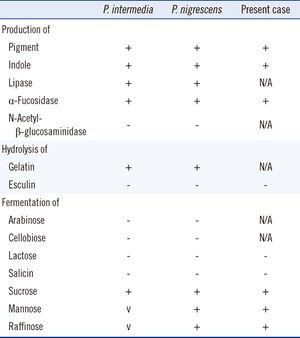 P. nigrescens are black-pigmented Bacteroides that ferment carbohydrates. They are gram-negative, non-sporing, obligatory anaerobic, rod-shaped bacterium of the genus Prevotella that is commonly found in oral flora.

Since P. nigrescens are obligate anaerobes, all experiments involved in its characterization must be run under strictly anaerobic conditions. Cells grown in broth cultures are 0.3 to 0.7 µm wide by 1 to 2 µm. On agar, colonies are 0.5 to 2 mm in diameter, circular, low convex and smooth. On blood agar, the colonies are brown to black suggesting weakly hemolytic, and sometimes alpha-hemolytic, properties. Pigmentation is mainly towards the outer edges whereas the center remains creamy to dark brown. Strains grown on blood agar also exhibit red fluorescence under long-wave UV radiation (365nm).[1]

P. nigrescens uses mixed fermentation in anaerobic living conditions, breaking down dextrin, glucose, maltose, and sucrose. In the process of fermentation, they produce acetic, isobutryic, isovaleric, and succinic acids. Characterization using the API ZYM system revealed that P. nigrescens reacted with acid and alkaline phosphatases, phosphoamides, and β-glucosidases. The system showed weak reactions with butyrate esterase and caprylate esterase lipase. (Figure 3) The principal respiratory quinones are unsaturatedmenaquinones. The G+C content of the DNA is 40 to 44 mol%.[1] 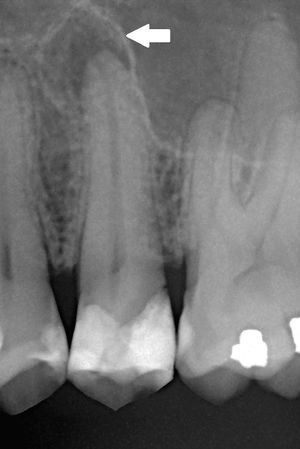 Periodontitis, or periodontal disease, is inflammation around the tooth. It is a serious gum infection that eventually leads to progressive loss of soft tissue and bone that supports the tooth if left untreated. (Figure 4) Microorganisms, such as P. nigrescens, adhere to the surface of the tooth and multiply. They then trigger the immune system, which leads to the syndromes such as inflammation and bleeding of the gums. Studies suggest that the root of P. nigrescens pathogenicity lies in that it seems to promote the release of inflammatory mediators.[10] [11]

However, more research needs to be conducted in order to truly accept P. nigrescens as a putative periodontal pathogen for periodontal disease. Contradictory data showed that 9 of 21 subjects (15 periodontitis patients and 6 healthy volunteers) harbored more than one genotype of P. nigrescens. Several different types were found occupying different sites around the same tooth.[9] This data seems to suggest that no specific relationship existed between disease status and colonization of same or different types of P. nigrescens. The reliability of this data should be carefully considered as the selected cohort is on the smaller side.

Carotid atherosclerosis is also known as arteriosclerotic vascular disease. It is marked by the thick of artery walls in the heart, which is a result of invasion and accumulation of white blood cells. However, the developmental process of this disease is not well studied. It has been suggested that inflammatory processes in the endothelial cells of the vessel walls initiate the onset of disease.[13] Diagnosis involves ultrasound scanning and calculated intima media area (cIMA) measurements.

Several studies published in the past two decades have implicated oral diseases, periodontitis in particular, as risk factors for the development of cardiovascular diseases.[2] Cardiovascular disease (CVD) is a class of disease that involves the heart or blood vessels. A few examples of CVD include coronary thrombosis, stroke and atherosclerosis. The way through which periodontitis contributes is by increasing the systemic inflammatory burden and pathogenic processes that are known to lead to atherosclerosis.[14] More recently, a direct association was established between the localization of P. nigrescens in the oral cavity and atherosclerosis.[2]

Figure 5. Propolis in beehives. Propolis is a wax-like resinous substance collected by honey bees from tree buds or other botanical sources and used seal cracks in the hive. By Abalg (Own work) via Wikimedia Commons.

The development of new therapies for treatment of oral cavity diseases is of great importance since the development of antibiotic resistance of certain microbes. One of these new treatments that have emerged is the use of propolis, more commonly known as bee glue.[4] (Figure 5)

The biological activities of bee glue include antibacterial, anti-fungal, anti-protozoan, antiviral, anti-tumoral, immunomodulation, anti-inflammatory and other therapeutic properties.[4] Currently, studies show some types of propolis are effective in treating gum infections and therefore inflammations due to P. nigrescens. Penicillin G, erythromycin, meropenem, metronidazole and tetracycline were found to inhibit 90% of the growth (MIC90) of P. intermedia and P. nigrescens strains at of 0.06, 0.13, 2.0, 4.0 and 4.0ug/mL respectively. P. intermedia and P. nigrescens were found to be susceptible to three ethanolic extract of propolis at 128ug/mL.[4] Preliminary studies have shown that propolis has active constituents including flavonoids that give it anti-inflammatory properties. Flavonoids are a class of plant secondary metabolites that have been proposed to have anti-inflammatory mechanisms including modulation of the arachidonic acid pathway, inhibition of gene transcription, protein expression and activity of inflammatory enzymes, as well as secretion of anti-inflammatory mediators.[16] Other active constituents found in bee glue also have properties that inhibit cell proliferation.

Propolis shows great promise as a non-invasive and natural treatment for gum disease. The Nation Institutes of Health rates propolis as "possibly" effective for treating certain conditions. However, gum disease does not yet fall under the umbrella of the conditions mentioned by the NIH. There is currently insufficient evidence to rate the consistency and effectiveness of propolis in treating gum disease due to colonization of P. nigrescens.[17]

Majority of evidence suggests that P. nigrescens is periodontal pathogen. However, there is still contradictory data showing the presence of P. nigrescens in healthy oral flora. It is of significant importance to establish a cause-and-effect relationship between P. nigrescens and periodontitis so that it can be used as a marker for gum disease through more rigorous and long-term research.

Currently there is a disconnect between oral health and general health. The mouth is the gateway to the body and therefore is essential to good overall health. Data shows that there is a direct connection between the health of the mouth and that of the heart. This connection can change the way we diagnose heart disease and plan treatments. If P. nigrescens can be proven to be associated with periodontitis, which has already been shown to correlate to heart disease, then it could potentially be used as a diagnosis tool for heart disease. Microorganisms in the mouth such as P. nigrescens can also serve as a target for heart disease. The first step to achieving these goals, however, lies in raising awareness for the link between the mouth and heart.

Edited by Nancy Zhu, a student of Suzanne Kern in BIOL168L (Microbiology) in The Keck Science Department of the Claremont Colleges Spring 2015.