A Microbial Biorealm page on the genus Probiotics and Prebiotics

Probiotics which are also known as friendly bacteria or good bacteria can be defined as living microorganisms that are beneficial to the health of their host. In fact, the etymology of probiotics is literally, “pro health”. The idea that probiotics could be used to restore a healthy gut microbiome originated in the early 1900s. First in 1906, the French pediatrician Henry Tissier realized that if specific bacteria were administered to patients with diarrhea, they could help create a healthy gut flora. Gut flora are the microscopic organisms living in the intestinal systems [1]. Then again in 1907 the Russian scientist Eli Metchnikoff suggested that, “the dependence of the intestinal microbes makes it possible to adapt measures to modify the flora in our bodies and to replace harmful microbes with useful microbes [1].”

Based on these original ideas it is now widely accepted that probiotics can be useful for many areas of health. Probiotics can support healthy immune, digestive, and respiratory systems. They can also help high risk groups such as children avoid infectious disease [1]. However, there is more decisive research confirming the idea that probiotics are more successful in the prevention of health issues, than in treating them once they start. Probiotics are found naturally in foods such as yogurt, sauerkraut, miso, kim chi (fermented cabbage), and cultured milk. However, they are also available in nutritional supplements and commercial products.

In order for probiotics to work, or restore a healthy gut microbiome several things must be true. The probiotics microorganisms have to be able to survive the passage through the digestive tract, they also must people able to inhabit the gut or grow in the presence of bile [2]. Two commonly used types of probiotics are lactobacillus and bifodobacterium. Probiotics work in several different ways.

They prevent damage bacteria spreading in the body, can produce vitamins and enzymes, and change the acidic environment [3]. Overall, the goal of probiotics is to restore the microbiome to its natural and healthy state, which could have been altered by dietary or environmental influences such as the use of excessive antibiotics [3]. It is important to note that findings on the success of probiotics are still in the process and many other factors could be at play such as how long will the new bacteria survive, and if the effects are possibly from the healthy food itself. 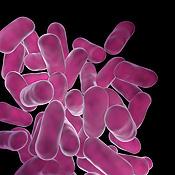 In studies it has been well established that probiotic bacteria adhere to the wall of the gut, but there is not sufficient evidence to suggest that these microbes permanently colonize. Thus, continuous replenishing of the probiotic may be required in order for the human to receive the bacterial benefits. A report that examined the ingestion of Bifidobacterium found that as long as the probiotic was taken daily there was bacterial presence in the colon, but only eight days after daily consumption ended there were no traces of lingering microbes [6]. However, studies have shown that strains such as lactobacilli were detectable up to a year after consumption, suggesting that long-term colonization may be possible [5].

Even though scientists have been researching probiotics and their possible benefits to human health for more than a hundred years, the results of studies on their effects have not been completely conclusive. Some theorized perks of probiotic use are possible prevention of tumors, production of by-products that inhibit colonization by unwanted bacteria, boost in immune system response, and improved absorption of vitamins and minerals. One reason the data has been inconclusive is that many studies have focused on probiotic benefits in animals, but it has not been shown that these effects necessarily apply to humans as well [6].

Probiotics have been shown to be effective in numerous health conditions. For instance, in people with lactose intolerance, probiotics have been shown to produce products that improve tolerance. Probiotics given simultaneously with antibiotic treatments for intestinal infections have been confirmed to reduce the frequency of symptoms such as diarrhea. Additionally, recurrences of infections due to the pathogen Clostridium difficile (commonly referred to as C.diff) have been reduced by supplements of probiotics [5].

A study performed by a microbiologist at Washington University in Saint Louis tested the effectiveness of probiotic foods on sets of twins, giving one twin probiotic yogurt twice a day while the other ate a normal diet. The result was that neither the bacteria colonized nor did the pre-existing bacterial community change; the reason for this was thought to be the relatively insignificant number of consumed microbes compared to the human microbial population. But when the bacterial strains from the yogurt were fed to mice, although there was again no community change, the mice did show increased ability to break down carbohydrates. However, as stated earlier, it is difficult to relate the results between mice and humans [9].

Prebiotics were first identified in the mid 1990’s. Scientists narrowed the meaning of the term to “a nondigestible food ingredient that beneficially affects the host by selectively stimulating the growth and/or activity of one or a limited number of bacteria in the colon, and thus improves host health.” [16] However, this wasn’t a narrow enough definition. In order to truly nourish the beneficial microbes in our colon, the prebiotic needed to have three major characteristics. First, it needed to withstand the chemical conditions in gut, namely its high acidity. Second, the bacteria in our colon needed to be able to ferment it. Third, it needed to markedly benefit a selective set of bacteria; namely those which were most beneficial to human health. [16] The scientist who first classified prebiotics has stated that only two substances properly conform to this definition: namely inulin and oligofructose. Galacto-oligosaccharides, fructooligosaccharides are also widely accepted as prebiotics. [10] 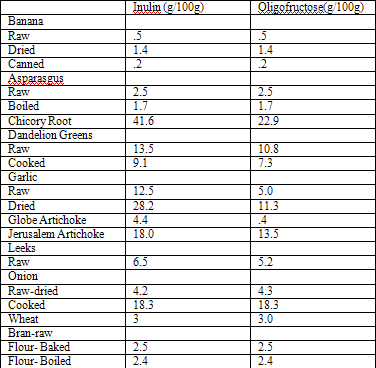 These two substances occur in high concentrations in many plants. Commonly consumed foods and their inulin and oligofructose content is shown in the chart. [17] According to a study conducted in 1999, the average American diet provided an average of 2.6 grams of inulin, and 2.5 grams of oligofructose a day. The main source of prebiotics was in wheat, which provided about 70% of average inulin intake, with onions accounting for an additional 25% of prebiotic intake.[17] There is no consensus about how much a prebiotic material a healthy adult should eat each day, and in fact standardized ‘dosages’ are often frowned upon because of each person’s unique digestive tract, which can encourage or stunt the use of prebiotics. [16] 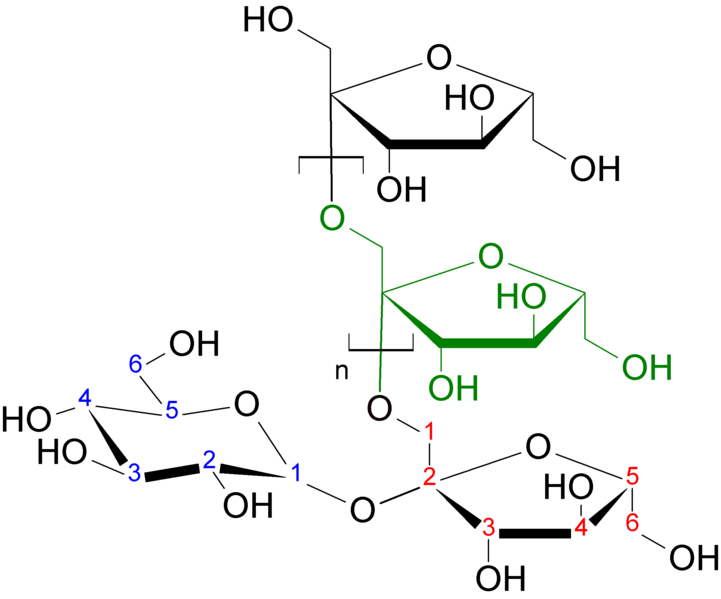 Theoretically speaking, a healthy community of symbiotic microbes in a host’s gut could confer a number of benefits. In general, prebiotics have been shown to effectively nourish bifidobacteria and lactobacilli across a number of species. [11][12] These in turn have the potential to aid in a variety of healthy processes, such as absorbing minerals[18], supporting immune function[19], alleviating symptoms of bowel diseases [19] and a reduced risk of colon cancer [20].

The question remains, do prebiotics really work? There have been innumerable studies done over the past decade on the effectiveness of prebiotics, conducted on both humans and animals. Especially regarding the four most well-established prebiotic substances—inulin, lactulose, and galacto-oligosaccharides, fructooligosaccharides—multiple studies have been done to measure and legitimize the effective of prebiotic substances [10]. Studies of prebiotics use several different criteria to evaluate their effectiveness. Many studies have focused on measuring the success of prebiotics in nurturing “good” gut microbial communities. The results from these have been largely positive. For instance, prebiotic breast milk formula fed to cows showed a significant increase in bifidobacteria and lactobacilli, two bacteria correlated with low infection rate [11]. Another similar study conducted with rats corroborated these results; the rats were fed a diet of fructo-oligosaccharides and then researchers tested the content of the rat feces. The results exhibited a significant reduction in coliforms, clostridia, and Bacteriodes—bacterial groups that include species that are considered to be “non-desirable” members of the gut community—and an increase the presence of anti-carcinogenic bifidobacteria [12]. Another series of studies has looked at the effectiveness of prebiotics in addressing disorders and illnesses in human patients; these have shown mixed and often contested results. Studies have shown that prebiotic use reduced the number and size of precancerous colon lesions [12]. Another set of recent experiments report that prebiotics aid in mineral absorption, especially calcium—this has been tested both in relationship to adolescent girls and post-menopausal women. Research in underway on testing a possible benefit of prebiotics in patients with diabetes, but these have shown little conclusive linkage [11]. Lastly, prebiotics have been tested in their effectiveness in maintaining remission and accelerating healing in Irritable Bowel Disorder patients [13]. Despite several similar studies lauding the ability of prebiotics in care for such disorders, a study conducted in 2010 with 103 members showed there was no significant change in patients with active Crohn’s disease over an eight week period [14]. Although the jury is still out on the beneficial effects of prebiotics, one conclusion is certain: prebiotics aren’t bad for you. Although studies conducted on prebiotics have not always been able to give conclusively positive results, studies show that the only adverse effect of prebiotic consumption is a laxative effect [12].

17. Moshfegh, Alanna, James Friday, Joseph Goldman, and Jaspreet Chug Ahuja. "Presence of Inulin and Oligofructose in the Diets of Americans." The Journal of Nutrition 129 (1999).