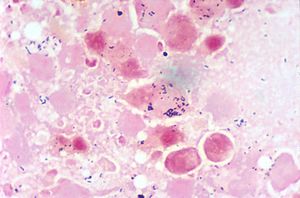 Renibacterium salmoninarum is a gram-positive bacterium that was first described in 1930 when it was found in Atlantic salmon in Scotland. It is also known as Renibacterium salmonina and Corynebacterium salmoninus. This bacterium is the causative agent of Bacterial Kidney Disease (BKD), also known as corynebacterial kidney disease and salmonid kidney disease in salmonids. The bacterium is characterized by its small, diplobacillus, and rod shape. It does not form spores, nor is it motile or encapsulated. When grown on agar, this bacterium can be characterized by it opaque, smooth, convex, and shiny colonies which are a creamy yellow in color. Colonies may vary in size. If atypical, dormant cells from this bacterium may be rod or coccoid in shape. Typically, the cells are 0.8-2 μm long and >0.45 μm wide. Width can be used to differentiate between normal and atypical cells. The R. salmoninarum genome was published in 2008 and has 3,155,250 base pairs. 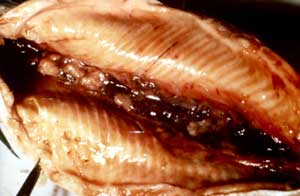 A salmonid infected with BKD www.mi.gov

R. salmoninarum primarily affects juvenile and pre-spawning salmonids. While other species of fish such as Pacific herring can harbor the bacterium, it not known if they are able to transmit it. Susceptibility and mortality among infected salmonids varies among salmonid species. Lake trout, rainbow trout, brook trout, lake whitefish, and bloater are all somewhat susceptible to BKD, but do not experience the highest mortality rates. Coho salmon, domestic Atlantic salmon, and chinook salmon are more susceptible to the bacterium and BKD and experience higher rates of mortality. 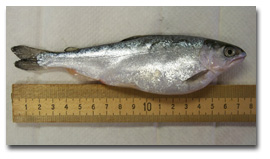 A salmonid with abdominal fluid build-up and swelling http://nas.er.usgs.gov

The interaction between the young salmonids and Renibacterium salmoninarum is an obligate parasitism and BKD has led to dramatic declines of salmonids in fisheries. In Chinook salmon, BKD can demonstrate a number of the following symptoms: abdominal fluid build-up and swelling, pseudomembranes on viscera, kidney and gill necrosis, hemorrhaging on viscera and in intestines, ulcers or abscesses in muscles, protruding eyeballs, anemia, blood blisters, and lesions of the eyes, liver, spleen, and heart. Transmission of BKD can occur vertically or horizontally from other infected salmonids. R. salmoninarum can not exist outside its host for extended periods of time, however, it is thought that the bacterium can exist in the kidneys or digestive tract of a salmonid for long periods of time. BKD is not always exhibited in host salmonids and can be triggered by trauma to the host, acquisition of another infection, or damage to the kidneys or digestive tract.

While R. salmoninarum has been found in salmonids throughout the Northern Hemisphere and Chile, studies show that molecular variation between isolates is low. A study by Grayson et al. in 1999 showed that there was very little variation in the 16S-23S rDNA spacer region of even the most geographically distant isolates. However, isolates of the bacterium from Lake Michigan have been to shown to be more virulent than those of the Pacific Northwest. The virulence factors of R. salmoninarum are not completely understood, however, but one potential virulence factor is p57, a protein that can be found on the surface of the bacterial cells. Its appears that virulence is related to the abundance of this protein. Erytromycin, a FDA approved antibiotic, is useful in the treatment of BKD and the prevention of vertical transmission of R. salmoninarum.

Optimal growth of R. salmoninarum occurs at 10–20ºC. Growth does not occur at 30–37ºC. The bacterium is a neutrophile with its optimal pH ranging from 5.8-7.8. It survives intracellularly within its host. The pathogen has been found throughout the Northern Hemisphere and in Chile and was first described in 1930 in Scotland. BKD was not recorded in the United States until 1967 in the Great Lakes. R. salmoninarum led to an outbreak of BKD in the Great Lakes from 1988-1992.

A study published in 2011 by Sandell and Jacobson compared and evaluated quantitative PCR diagnostic assays of R. salmoninarum. While the majority of pathogen studies require multiple assays, this study found that the msa/NFQ and abc/NFQ qPCR assays were more effective at higher infection levels than the ELISA.

Rhodes et al published a study in 2011 on nearshore ecosystem predictors of a bacterial infection in juvenile Chinook salmon. They found that the location they captured salmonids in was better related to disease prevalence than the origin of the salmonid. Temperature, densities of Chinook salmon, and density of river lamprey, a possible transmission vector of R. salmoninarum were all influential risk factors. There was a strong association between the Chinook salmon densities and horizontal transmission of the bacterium.

Evelyn, T.P.T, J. E. Ketcheson, and L. Prosperi-Porta. "Use of Erythromycin as a Means of Preventing Vertical Transmission of Renibacterium Salmoninarum." Diseases Of Aquatic Organisms 2.1 (1986): 7-11.

O'Farrell, Cl, and Ms Strom. "Differential Expression of the Virulence-associated Protein P57 and Characterization of Its Duplicated Gene Msa in Virulent and Attenuated Strains of Renibacterium Salmoninarum." Diseases of Aquatic Organisms 38 (1999): 115-23