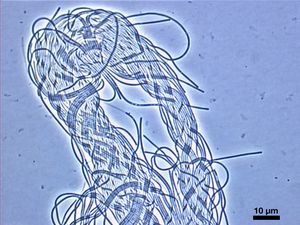 Roseiflexus castenholzii is gram negative and is classified as a green, nonsulfur bacteria. Colonies that were found were red to reddish brown in color. Roseiflexus castenholzii is an unbranched multicellular filamentous organism that does not have a defined length but the diameter is .8 to 1.0 μm. R. castenholzii has no flagella and show signs of gliding motility. An unusual aspect of this organism is that it lacks chlorosomes, which can usually be found in related species, and intracytoplasmic membranes.

Roseiflexus castenholzii is thermophilic and found on microbial mats in hot springs, and was originally found in the Nakabusa hot springs in Japan. Ideal conditions to live at are a water temperature ranging from 45 to 55 degrees Celsius and a pH from 7 to 9. The organism can function under aerobic and anaerobic conditions.

Roseiflexus castenholzii has a single, circular chromosome with a length of 5,723,298 base pairs. There are also 4,330 protein genes and 56 RNA genes. The G+C content of this organism is to some extent higher than other related species.

R. castenholzii has genes that are unique from other Roseiflexus species and some whose functions are not yet known. It seems that Roseiflexus strains lack genes encoding for a nitrogenase apoprotein, which is inconclusive as to whether the bacteria can engage in nitrogen fixation. There are other genes that encode molecules involved in iron transport, phosphate transporters, and regulatory enzymes. R. castenholzii lacks genes that code for bacteriorhodoposin; these genes are present in other Roseiflexus strains to allow better adaptability of the bacteria to fluctuations in light (Van der Meer, M. T., et al.).

Roseiflexus castenholzii is a phototrophic microorganism that forms unbranched, multicellular filaments of indefinite length. These unbranched filaments are made up of smaller segments that cause them to resemble a string of beads and may be intertwined with one another.

These bacteria are unique in that they lack chlorosomes, which are light-harvesting intracellular vesicles that are usually present in green sulfur and green nonsulfur bacteria. This causes it to be the first culturable filamentous anoxygenic phototroph (FAP) that lacks chlorosomes (Yamada, M., et al.). They do, however, contain bacteriochlorophyll (Bchl) a as well as γ carotene derivatives, which contribute to their ability to photosynthesize without producing oxygen. R. castenholzii is classified as a FAP but can reproduce under either aerobic or anaerobic conditions and in either a light or dark environment.

Under anaerobic light conditions, R. castenholzii harvests energy via photoheterotrophy. This implies that it uses light as an energy source when it is readily available and organic materials as a source of carbon. It was demonstrated that only under light conditions were organic materials such as citrate, lactate, glucose, and casamino acids used as the sole carbon source (Hanada, S., et al.). On the contrary, R. castenholzii becomes chemoheterotrophic when faced with an aerobic dark environment. When light is not available, the energy is instead gathered from oxidizing inorganic materials while organic materials provide the carbon source. The respiration process requires the presence of oxygen, rendering the bacterium unable to grow under anaerobic dark conditions.

In experiments conducted on Roseiflexus strains from Yellowstone National Park it was found that bicarbonate was present among the FAPs (Van der Meer, M. T., et al.). In conjunction with the presence of genes encoding the 3-hydroxypropionate pathway, there exists a possible ability for Roseiflexus to use the carbon dioxide produced by this pathway in autotrophy. Attempts to confirm this finding have been unsuccessful since R. castenholzii has shown no growth with bicarbonate as a sole carbon source in lab settings (Hanada, S., et al.). Being a nonsulfur bacterium, its genome shows no genes coding for sulfide metabolisis. There is speculation that sulfide concentrations in the environment that exceed bacterial tolerance may inhibit photoautotrophic behavior of R. castenholzii.

Roseiflexus strains are non-pathogenic and are generally found in alkaline hot spring microbial mats. R. castenholzii was originally isolated in Japan but related strains have been isolated from springs in Yellowstone National Park.

Although R. castenholzii has not exhibited confirmed photoautrotrophic behavior, it is often found with an organism that does. Synechococcus species are found residing alongside strains of Roseiflexus and improve growth of the latter when grown together in the laboratory. Using microautoradiography to tag and observe distribution of 14C, it was found that Synechococci are the predominant producers of carbon dioxide during the day. These bacteria produce glycolate and excrete this photosynthate for use by filamentous bacteria as an organic substrate (Van der Meer, M. T., et al.). Through glycolate production during the day and glycogen fermentation at night, Synechococcus species allow those of Roseiflexus to vicariously display photoautotrophy without synthesizing any of its own organic substrates.

R. castenholzii synthesizes lipids – of which glycosides and wax esters are frequently found in nonsulfur microbial mats where Roseiflexus species are found.