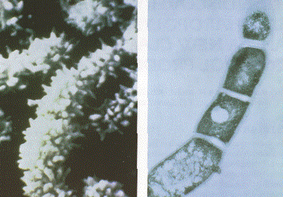 Saccharopolyspora spinosa produce metabolites named 'spinosyns' that are economically, ecologically, and agriculturally important. It has been found that spinosyns have pesticidal properties that are effective for many mites and insects (Salgado 1998, Bond et al. 2004, Cloyd 2009, Thompson et al. 2000, Watson 2001, Hertlein et al. 2011). Interestingly, the discovery of these properties led to a patent (US5631155) on S. spinosa and the byproducts produced by the organisms (Turner et al. 1995). Spinosyns are generated by S. spinosa in an aerobic fermentation broth consisting of necessary metabolic nutrients and the S. spinosa organisms. The spinosyns extracted from the broth make up a class of insecticides that are sold under trade names such as Conserve® and Entrust®. Because the active ingredients in these pesticides are biological byproducts, the pesticides are marketed as "natural," and less toxic compared to other available chemicals. Furthermore, the spinosyns have two modes of action that help prevent development of resistances. Therefore, pesticides containing spinosyns are attractive options for pest management in agriculture.

The genome of Saccharopolyspora spinosa has been drafted by the Beijing Genomics Institute. It was produced using a whole-genome shotgun strategy with an Illumina genome analyzer as well as Roche 454 pyrosequencing. The entire genome was found to be at 8,581,920 base pairs with 8,302 predicted coding sequences. G+C content was found to be 67.94%. The Illumina pair-end reads produced an assembly of 22 contigs. An estimated 82.8% of nucleotides are predicted to encode proteins (Pan et al. 2011). This organism is still under study and its genome is in the process of being fully mapped.

A 108-kb genomic DNA region of S. spinosa NRRL 18395, producer of spinosyns, has been cloned, sequenced and analyzed to reveal clustered genes encoding a type I polyketide synthase (PKS) complex. PKS genes in the organism are flanked by those that encode homologs of enzymes involved in the urea cycle, valine, leucine and isoleucine biosynthesis and energy metabolism (Zirke et al. 2004).

Cell Structure
The cell wall of Saccharopolyspora spinosa is mainly composed of a thick layer of peptidoglycan, and lipoteichoic acids, that serve as chelating agents and also for adherence. The individual peptidoglycan molecules are cross-linked by pentaglycine chains using a DD-transpeptidase enzyme. Spores of S. spinosa are round to oval or oblong and covered by a sheath. The cell wall of this organism, just as with other members in its genus is characterized by the absence of mycolic acids (long-chain α-substituted Β-hydroxylated fatty acids) (Alexander et al. 2000).


Metabolism
Saccharopolyspora spinosa is a chemoorganoheterotroph that decomposes organic matter to produce energy. It may utilize a list of organic compounds for carbon and energy. Some of these include: acetate, butyrate, citrate, formate, lactate, malate, proprionate, pyruvate, and succinate (Mertz and Yao 1990). This species also reduces nitrogen. During metabolism S. spinosa generates metabolites two of which, spinosyn a and d, are the most notable. These metabolites are mainly generated in a production setting for the purposes of extracting them for the production of active ingredients in pesticides.


Life Cycle
Since the discovery of S. spinosa, there have been no reports in the scientific literature of the organism being re-recovered in nature. However, it is likely that the life cycle of S. spinosa in nature is similar to other soil actinomycetes. The aerial hyphae of S. spinosa likely serve as a means of spore dispersal. In actinomycetes, spores germinate and a mycelium network grows. Aerial and substrate hyphae containing spore chains grow from the mycelium. Genetic information among spores is acquired through conjugation (Whalen and Sampedro 2010). Fragmentation of S. spinosa hyphae in liquid (Mertz and Yao 1990) may also serve as a means of spore dispersal.


Ecology
The interrelationships between S. spinosa and other organisms has not been thoroughly investigated. However in a study using potato cyst nematode, Globodera rostochiensis, bioagents obtained from S. spinosa caused significant inhibitory effect on multiplication of the nematode, suggesting a possible antagonistic relationship with this organism in nature (Trifonova 2010). It is also possible that S. spinosa would generate available nitrogen (via nitrogen reduction) for other organisms in natural settings.


Environmental and Applied Significance
The discovery of S. spinosa has led to a novel family of environmentally friendly compounds with many applications in integrated pest management programs. The metabolites produced by S. spinosa make up the low-risk insecticidal chemical called 'spinosad'. This natural pesticide consists of a mixture of tetracyclic macrolide neurotoxins, spinosyn A and D that kill many insect pests and have no known toxic effect on humans (Bond et al. 2004, Pan et al. 2011). Studies have demonstrated that spinosad is not carcinogenic, mutagenic or terotogenic to mammmals (Thompson et al. 2000, Kirst 2010). Furthermore, spinosyns also have low toxicity and reduced risk toward many aquatic and avian fauna (Kirst 2010). Spinosad is an attractive pest management tool because it degrades quickly via photolysis (West 1997, Thompson et al. 2002, Kirst 2010).

Low toxicity to non-target organisms and rapid degradation are characteristics that pose many opportunities for pest management in a variety of settings. For example, spinosad has been demonstrated to be a good option for mosquito management in domestic water supplies (Bond et al. 2004). It has also been marketed as a treatment for headlice under the pharmaceutical name Natroba. In general, spinosad is effective for wide range of mites and insects (Thompson et al. 2000). Some of these are major crop pests such as European Corn Borer, Colorado Potato Beetle, Western Flower Thrips, and Grape Berry Moth (Thompson et al. 2000).

Spinosads can persist for much longer periods in the absence of light. In dry grain storage bins this compound remains viable for six months and up to two years (Hertlein et al. 2011). Therefore, the chemical is used in several countries to protect stored grain from pests. The effectiveness of this compound for these purposes is still being explored. It is reported that several factors such as insect species, pest life stage, grain type, and grain variety influence the strength of spinosad (Hertlein et al. 2011).


Mode of Action of Spinosyns
Contact and ingestion of spinosad are two means of exposure to the pesticide (Thompson et al. 2000). Spinosyns have a unique mode of action involving the postsynaptic nicotinic acetylcholine and GABA receptors (Bond et al. 2004, Watson 2001). Spinosyn A, the major active component of spinosad, causes involuntary muscle contractions and tremors by widespread excitation of neurons in the central nervous system of insects at low concentrations. Prolonged spinosyn-induced hyperexcitation results in paralysis associated with neuromuscular fatigue and death (Salgado 1998).

Kirst, H.A. "The spinosyn family of insecticides: realizing the potential of natural products research". The Journal of Antibiotics. 2010. Volume 63. p 101–111.

Trifonova, Z.T. "Studies on the Efficacy of some Bacteria and Fungi for Control of Globodera restochiensis". Journal of Agricultural Sciences. 2010. Volume 55 (1). p. 37-44.