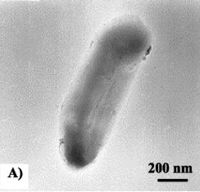 Shewanella algae is a gram-negative, rod-shaped, motile bacillus with a single polar flagellum. S. algae is found in warm Marine environments throughout the world, and is isolated from seawater with 15-20ppt salinity [6].

Shewanella algae is of interest because of its potential to be a serious human pathogen. It is known to cause peritonitis and obstructive pneumonia, rupture of aortic aneurysm, ear infections[1], bacteraemia, rare occurrences of skin and soft tissue infections [8], bone and joint infections, and many others [6].

In the past, its effects have often been attributed wrongly to Shewanella putrefaciens. There has been a rising number of disease cases attributed to S. algae in the last decade, thanks to correct classification.

Shewanella algae is associated with bacterial peritonitis. The species is also of interest because of its potential to treat radioactive waste in groundwater. It has the ability to reduce uranium and plutonium by reducing soluble forms to insoluble forms [7].

Shewanella algae has not yet been sequenced, but it has been compared to different species similar to its characteristic such as the Shewanella putrefaciens[4]. They share common features such as their size, structure organization and phylogenetic relations based on the contents of the 16S rRNA gene sequences. The qnr genes (qnrA, qnrS and qnrB) are the olny known genes of this bacterium. These genes are usually carried by large conjugative plasmids (50 to 180 kb) that often encode extended-spectrum beta-lactamases (ESBLs) or AmpC-type beta-lactamases[3]. S. algae has a G + C content of 52-54%[6]. 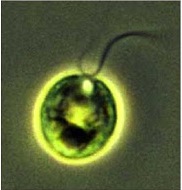 Electron microscopy of S. algae revealed extensive capsular fringes on the cell surface, which may play a part in the ability of S. algae to adhere to mineral surfaces. The length of surface polysaccharide polymers could contribute to S. algae's ability to promote infection [10]. Infections are most likely facilitated by adhesion properties and biofilm formation[12].

S. algae is a facultative anaerobe, and has the ability to use metallic cations as electron acceptors in the electron transport chain if oxygen is not available[11]. It has the ability to produce hydrogen sulfide and reduce Fe(III), making it very corrosive of metal surfaces[12]. It has also been shown to be able to reduce nitrite. S. algae shows acid production from ribose, and sometimes from glucose and fructose. Tests also showed hydrolysis of gelatin, and decarboxylation of ornithine[6].

When grown on sheep's blood agar, S. algae produced mucoid colonies with beta-hemolysis, indicating the production of a carbohydrate capsule. In the lab it has shown to grow well on conventional solid media[6]. It is resistant to penicillin, ampicillin and tetracycline[1].

S. algae is important in the cycling of organic material and the bioremediation of halogenated organic pollutants[1].

Shewanella algae are mesophilic organisms found in aquatic environments. They have the capacity to also live in low temperature waters[5]. They are detected in seawater during the fall months, where temperatures are around 13°C. Since this organism can survive anaerobically and reduce Fe(III), uranium, and plutonium.

They have been attributed to a wide array of disease in humans, such as ear infections and open wound infections[2]. S. algae infects through the open wound when the host swims in the warm ocean water. There has been one case of infection found in a Sea Lion in 2010[7]. Strains with wildly different clonal origin are capable of infecting humans. It was found that the same isolate of S. algae was the cause of infection in several different patients, and in two of these patients the same clone was isolated many months after diagnosis[12]. This indicates that infection may be maintained by the same isolate.

[1] Beleneva, Irina A., et al. Biochemical and pathogenic properties of the natural isolate of Shewanella algae from Peter the Great Bay, Sea of Japan. Journal of Invertebrate Pathology, 2009. Volume 102: 250-255.

[10] Korenevsky, A., and Beveridge, T.J. The surface physicochemistry and adhesiveness of Shewanella are affected by their surface polysaccharides. Microbiology, 2007. Volume 153:1872-1883.