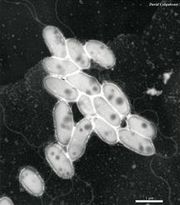 The Genus Sphingomonas includes a range of bacterium that are remarkable for their ability to break down polycyclic hydrocarbons. Bacteria in this genus have been detected in a variety of environments, both marine and terrestrial. In recent years, these bacteria have been a focus of study because of their possible applications for bioremediation (one of the major components of oil being stable aromatic hydrocarbons). In addition to these helpful functions, however, some strains of this Genus have also been found to cause illnesses in humans. [CITATION] 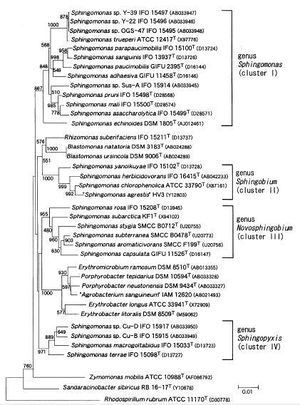 The Genus Sphingomonas includes many bacteria with varied morphological traits. Though initially only a few were none and mostly in a clinical setting, further studies started to reveal many morphologically similar strains. For this reason, in 2001 they were separated into four distinct clusters within the Genus (Figure 2). These clusters, collectively known as the Sphingomonads, are individually known as Sphingomonas, Sphingobium,

Novosphingobium, and Sphingopyxis. There are more than 20 known species that are distributed amongst these strains according to their chemotaxonomic and phenotypic traits, as well as their 16S rRNA gene sequences. (http://ijs.sgmjournals.org/cgi/content/abstract/51/4/1405)

Some shared traits among all strains of Sphingomonas are that they are Gram-negative and possess a bacillus (rod) shape. The bacteria are also strictly aerobic chemoheterophs. Whereas other bacteria utilize lipopolysaccharides in their cell envelopes, Sphingomonas integrate glycosphingolipids. This is the primary distinguishing characteristic separating them from other species in the α-subclass of Proteobacteria. In cultures Sphingomonas colonies typically appear yellow (Figure 3). Finally, Sphingomonas species’ major quinone is characteristically ubiquinone 10. (http://www.springerlink.com/content/v3654176x2651434/) 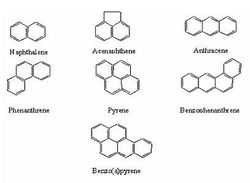 Figure 4. Examples of PAHs. These compounds are highly stable thanks to multiple double bonds, hydrophobic atoms, and many aromatic resonance structures for each.

Polycyclic aromatic hydrocarbons (PAHs) are a pressing issue for several reasons, the main being that they are dangerous for both humans and other organisms. PAHs are a major component of many fuels and oils, and therefore enter the environment through vehicle leaks, incorrect disposal of wastes, petroleum spills, and natural seeps. These compounds are extremely stable thanks to a system of double bonds throughout their hydrocarbon rings, and are therefore highly resilient in the environment. An additional problem is that many bacteria cannot degrade chemicals unless they are dissolved in water. Because of their high concentrations of hydrophobic carbon-hydrogen bonds, however, PAHs interact with non-aqueous media and soil organic matter. This often makes them unavailable to degradation and only furthers their persistence. For these various reasons, PAHs have low bioavailability and can be used as carbon sources by only a select few organisms.(http://www.sciencedirect.com/science?_ob=ArticleURL&_udi=B6VB5-4CNGPBP-2&_user=7774802&_coverDate=01%2F31%2F2005&_rdoc=1&_fmt=high&_orig=gateway&_origin=gateway&_sort=d&_docanchor=&view=c&_searchStrId=1729648888&_rerunOrigin=scholar.google&_acct=C000062877&_version=1&_urlVersion=0&_userid=7774802&md5=fece9ef915e49660d65274f1b80d52f5&searchtype=a)

PAHs are often formed by the incomplete burning of coal, oil, garbage, and other organic substances such as tobacco, wood, and meat. Humans often encounter at least two or more of these substances in the form of soot. Because of their presence in burned meats, they are often ingested. PAHs can also be produced industrially for usage in coal tar, crude oil, creosote and roofing tar. Some other forms are used in medicines, dyes, plastics, and pesticides. (http://www.atsdr.cdc.gov/substances/toxsubstance.asp?toxid=25) Any of these pathways may ultimately contribute to environmental levels, though the greatest quantities enter through oil seeps and spills.

PAHs with as few as three rings are recognized as carcinogens. For residents of the United States, most PAHs are encountered through ingestion, though this can vary depending on diet and lifestyle. (http://www.truthaboutcoaltar.com/aboutcoaltar.html) In humans, these compounds are known to affect the dermal, immunological, and hepatic systems. (http://www.atsdr.cdc.gov/substances/toxsubstance.asp?toxid=25) Various applications of PAHs to test animals, including orally, on skin, and through inhalation yields tumors. PAHs have effects on DNA binding and sister chromatid exchange, and can cause chromosomal aberrations and sperm abnormalities. Studies on the effects of PAH on human beings are ongoing.(http://www.sciencedirect.com/science?_ob=ArticleURL&_udi=B6VG6-40X8HKC-7&_user=7774802&_coverDate=01%2F01%2F2000&_rdoc=1&_fmt=high&_orig=gateway&_origin=gateway&_sort=d&_docanchor=&view=c&_searchStrId=1729718560&_rerunOrigin=scholar.google&_acct=C000062877&_version=1&_urlVersion=0&_userid=7774802&md5=e7f01dacf53df499c06eb834b63a27d8&searchtype=a) 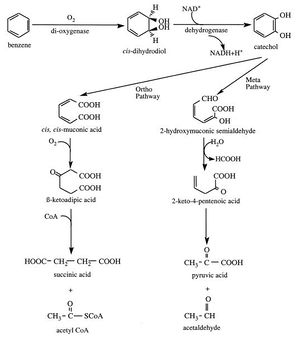 Figure 5. Microbial breakdown of an aromatic ring through ortho or meta cleavage.

Microbial PAH degradation typically begins with oxidization to cis-dihydrodiols. This ring breakage is energetically costly and is therefore usually the rate-limiting step of the process. This initial oxidation integrates atmospheric oxygen into the substrate (therefore, to utilize this pathway bacteria must oxygen-tolerant). Bacterial dioxygenase enzymes allow them to break the aromatic nucleus and insert the two oxygen atoms. Once the dihydrodiols are produced they will be re-aromatized using a cis-dihydrodiol dehydrogenase to produce a dihydroxylated intermediate. Continued oxidation of the cis-dihydrodiols eventually results in catechols, which can be targeted by other dioxygenases that cause enzyme-induced cleavage of the aromatic ring.

Two pathways of catechol degradation exist: the ortho pathway cleaves the bond between the two carbons carrying the two hydroxyl groups to produce cis,cis-muconic acid, whereas the meta pathway proceeds through cleavage of the bond between a hydroxyl-bearing carbon and the adjacent carbon with a hydroxyl group (Figure 5). The rest of the intermediates in the pathway are continuously processed into components of biosynthesis and energy. In the course of the reaction, carbon dioxide and water are also released. In this manner, the rest of the rings of a PAH will then be attacked; once one ring is reduced to pyruvic acid and carbon dioxide, the process will move onto the adjacent ring. The more rings are present in a compound, however, the harder it is for the microbe to degrade it due to its aforementioned hydrophobicity. (http://www.sciencedirect.com/science?_ob=ArticleURL&_udi=B6VG6-40X8HKC-7&_user=7774802&_coverDate=01%2F01%2F2000&_rdoc=1&_fmt=high&_orig=gateway&_origin=gateway&_sort=d&_docanchor=&view=c&_searchStrId=1729718560&_rerunOrigin=scholar.google&_acct=C000062877&_version=1&_urlVersion=0&_userid=7774802&md5=e7f01dacf53df499c06eb834b63a27d8&searchtype=a)

Though Sphingomonas species vary in their ideal habitats, most seem to possess functions useful to bioremediation (sometimes besides their PAH-degrading capacity). Therefore, much research has been focused on finding strains that thrive under conditions where bioremediation may be necessary. Some examples include:

A 1995 study collected bacteria from the United States Southeast Coastal Plain subsurface sediments and subjected them to a battery of tests. Tests of phylogeny using 16S rRNA genes showed that some of the collected strains were closely related to Sphingomonas capsulate. Additionally, it was found that these bacteria contained sphingolipids (characteristic of Sphingomonas). Perhaps most notably, most of these bacteria were able to grow on a variety of aromatic compounds, including both toluene and naphthalene. Though many other gram-negative heterotrophic aerobic bacteria can degrade these compounds, it is rare that one organism can catabolize both. Of the strains collected, one could degrade salicylate and benzoate, two could degrade p-cresol and salicylate, and five strains could degrade flourene, biphenyl, and dibenzothiophene. Though further characterization of these strains is ongoing, they are believed to be members of Genus Sphingomonas, all specializing in catabolism of different compounds at the subsurface level. (http://aem.asm.org/cgi/reprint/61/5/1917) 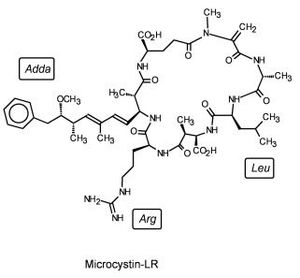 Figure 4. Structure of microcystin, an aromatic compound that sometimes contaminates marine environments. Studies have shown that microcystin can be broken down by some aquatic species of Sphingomonas.

At Scott Base in Antarctica, a strain known as Ant 17 was isolated from fuel-contaminated soil. The bacteria grows from temperatures as low as 1oC to 35oC, and can mineralize phenanthrene over a wider range than 24oC. Despite the cold conditions, this strain appeared to be able to metabolize at a rate quicker than should be allowed by mesophilic enzyme kinetics. Indeed, Ant 17 was more effective than Sphingomonas spp. WPO-1 under UV-irradiation and freeze-thaw cycles, indicative of adaptation to the Antarctic environment. Most relevant to bioremediation was the fact that Ant 17 could degrade the aromatic portions of various crude oils, jet fuel, and diesel fuel. Due to its wide aromatic substrate range and ability to catabolize them in low, fluctuating temperatures, Ant 17 appears to be a promising bioremedial microbe for the cleaning of cold, fuel-contaminated environments. (http://www.springerlink.com/content/nrklbqnvthatxjyl/)

In China a study was performed to assess the abilities of many marine lifeforms to break down microcystin, a common marine contaminant (Figure 4). Among the plants, invertebrates, fish, and bacteria whose abilities were studied was Sphingomonas sp. Sphingomonas was able to catabolize microcystin-LR using three different intracellular hydrolytic enzymes, one of which came to be known as microxystinase. This study represents an avenue for aquatic bioremediation. (http://en.cnki.com.cn/Article_en/CJFDTOTAL-STKX200501025.htm) 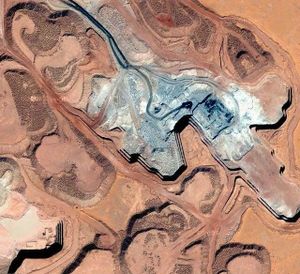 Often, soil around nuclear reactors and power plants or uranium mines contains uranium (IV) in forms such as [UO2(CO3)2]−2 and [UO2(CO3)3]−4, which can permeate groundwater and lead to health hazards. The Sphingomonas strain BSAR-1 was found to precipitate uranium thanks to an alkaline phosphatase secreted into the outside medium, thus preventing hazards. When the gene encoding this function, dubbed phoK, was inserted into E. coli and overexpressed, the bacteria became powerful uranium precipitators. This recombinant strain precipitated more than 90% of a provided quantity of uranium in less than 2 hrs, whereas the original Sphingomonas degraded this quantity in a little over 7 hrs. This study revealed both certain Sphingomonas species’ facility at bioprecipiation of contaminants, and the possibility that these traits could be transferred to other species to be used in bioremediation. (http://www.ncbi.nlm.nih.gov/pmc/articles/PMC2546639/?tool=pmcentrez)