Characteristics of the Symbiont: Symbiodinium sp. 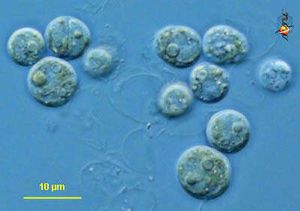 Symbiodinium is a genus of diverse endosymbiotic algae with genus members commonly referred to as zooxanthellae (1, 7, and 10). Zooxanthellae frequently form symbiotic relationships with a variety of marine animals including cnidarians, zoanthids, foraminifers, and jellyfish (2).Being algae, organisms of symbiodinium are autotrophic and eukaryotic, gaining energy from photosynthesis (1). Individual cells are coccoid and at times produce flagella to enhance motility (1). Symbiodinium sp. have the smallest genomes of all known dinoflagellates, but at 3pg of DNA per cell the genome is even larger than that of humans and has not been completely sequenced yet (5 and 6).

Characteristics of the Host: Coral 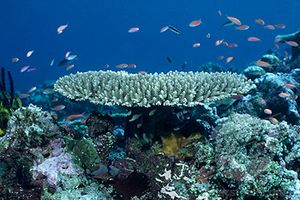 Many coral species form obligate endosymbiotic relationships with dinoflagellates (7). For example, the Hawaiian stony coral (Montipora verrucosa), corals of the genus Acropora, and Fungia scutaria all rely on zooxanthellae for survival (1, 7, and 10). 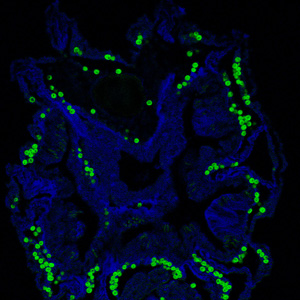 Zooxanthellae are found in gastrodermal cell vacuoles of the coral they reside in (10). Gastrodermal cells are cells that line the gastrovascular cavity, where nutrients are digested and distributed (Wikipedia). Coral are born azooxanthellate, symbiont free, and are infected with the symbiont horizontally while in the polyp stage through either feeding or phagocytosis by gastrodermal cells (10). Zooxanthellae provide photosynthetically fixed nitrogen and sugars to coral while coral provides inorganic nutrients, a high light environment, and protection from the threat of aquatic herbivores (10). Without zooxanthellae coral experience severely reduced growth, survivorship, and fitness (10). Coral form highly specific relationships with zooxanthellae, only taking in one zooxanthellae species per colony. The most successful coral-zooxanthellae relationships occur with coral-Symbiodinium species that commonly associate(10). Coral infected with a zooxanthellae species not found in its population either forms a weak relationship with the zooxanthellae or loses the symbiont altogether (10). 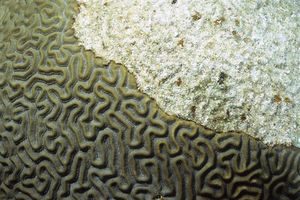 A dying brain coral with the white area bleached, covered in sediment, and void of the grooves seen in the healthy colored area National Geographic

The study of coral bleaching, or a coral's loss of its symbiont, gives insight to the specific pathways coral and symbiodinium interact. Corals are considered 'bleached' because the loss of algal symbionts lead to loss of pigmentation, and the color left is that of the underlying skeleton. Coral bleaching occurs during periods of exposure to elevated water temperatures and can be affected by a variety environmental factors (9). One contributing factor to dinoflagellate loss is damage to photosystem II, in particular the decline in number of D1 reaction center proteins (9). With damage to a protein important to maintaining photosynthetic function, these damaged and lost symbionts have a reduced, if not absent, photosynthesis levels. It is hypothesized that host corals expel the dysfunctional symbionts because they no longer produce fixed nitrogen (9).

A recent study on the scleractinian coral Ctenactis (Fungia) echinata found evidence that coral lectins, sugar-binding proteins, play a role in engaging zooxanthellae and maintaining symbiosis (4). Since corals are known to be species specific with their symbionts and can expel symbionts, there is some kind of recognition ocurring (4). Recognition occurs during the first few hours of the onset of infection through a lectin/glycan interaction (4). In Jimbo et al.'s experiment lectins transformed flagellate Symbiodinium cells (a motile form) into the coccoid form taken on during symbiosis (4). Lectin interaction could also be involved in the loss of Symbiodinium cells (4).

The relationship between host and symbiont genotype is unclear and no evidence of coevolution has been found, however there are light related patterns with distribution (7). In one host colony observed by van Oppen et al., there were different symbiont clades in shady areas versus those exposed to light (7). It appears that the occurrence of Symbiodinium taxon in coral species depends on a combination of factors including symbiont availability, ambient light levels, host genetic identity, and competition between zooxanthella taxa (7).

Host/Symbiont Recognition Mechanisms: Vidal-Dupiol et al. found two coral genes coding for proteins Pdcyst-rich and PdC-Lectin, which are involved in maintaining skeletal health and the zooxanthellae symbiosis (3,8). The decrease in Pdcyst-rich transcripts was found to correlate with a decrease in skeletal calcification, displaying its involvement with mineralization (8). PdC-Lectin was found to have the ability to bind to Symbiodinium cells, and its down regulation correlated with low levels of zooxanthellae cells (8). Because these two genes are down regulated at the onset of bleaching, Vidal-Dupiol et al. hypothesized that bleaching occurs partly because of a decrease in zooxanthellae aquisition (8).

Radical Formation Undermining Symbiosis: Higuchi et al. found that hydroxyl radicals, the most toxic reactive oxygen species, form in coral and zooxanthellae tissues under high levels of environmental stress, such as high levels of UV radiation and high temperatures. This production of hydroxyl radicals causes oxidative damage to organelles and photosystem II, reducing photosynthesis levels (3). Thus, it could be that coral recognize the reduction in productivity of nitrogen and sugars and stop supporting the symbionts, leading to bleaching. This supports the hypothesis that coral bleaching is occurring due to climate change.

[6] Lin, S. 2006. The smallest dinoflagellate genome is yet to be found: a comment on LaJeuness et al. "Symbiodinium (pyrrhophyta) genome sizes (DNA content) are smallest among dinoflagellates." Journal of Phycology 42: 746-748.