The problem of Clostridium difficile (C.diff) 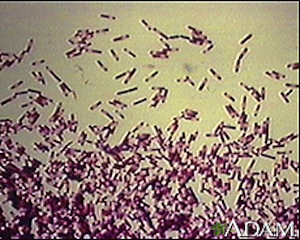 Clostridium difficile is a gram-positive, rod shaped bacteria. It is resistant to a number of antibiotics, and can actually grow more easily in their presence. Its genus name, Clostridium, refers to its spindle shape. The species name, difficile, is Latin for difficult. This refers to its hardiness and ability to survive in unfavorable conditions. It is an anaerobic, endosporic organism. This means that it thrives in an environment without oxygen. If it is stressed, however, it is able to form dormant spores. During this stage, the bacteria are able to live in adverse conditions. It will remain in a spore form until it reaches conditions adequate for germination. Once it has once again become active, C. diff. can cause disease. Clostridium difficile infections are common in hospitals, nursing homes or other areas where disease and antibiotic use are widespread [1].

Clostridium difficile spores are extremely hardy, and can survive for long amounts of time in environments devoid of food. The spores are resistant to drying and heating, and also have resistance to many forms of antiseptic cleaners. One of the few ways to kill C. diff. spores is to use a form of bleach. C. diff can also survive in spore form for as long as five months [2]. The ability of C. diff. to survive in this resistant form poses quite a challenge for hospitals.

C. Diff can change into its vegetative, disease causing state when it reaches the intestine of humans. As an anaerobe, it thrives without oxygen. Human intestine also contains glycine and cholate derivatives, which are the two substances that C. diff requires to germinate [3]. In healthy intestines with a normal population of microbes, cholate derivatives are further processed by the other bacteria present, thus preventing germination of the foreign C. diff. bacteria [4]. After broad-spectrum antibiotic treatment, much of the microflora of the intestine is disrupted or killed; this prevents the further processing of cholate, and allows C. diff. to germinate and flourish [5]. This also gives C. diff. more space in the intestine, as much of the other microbes that would ordinarily be in the intestine have been destroyed by the antibiotic treatment.

How you catch C. diff.

Clostridium difficile is most often acquired in hospitals or health-care settings as a result of environmental contamination. Surfaces are contaminated with fecal matter, including C. diff. which then can be spread by contact with humans [6]. Then it can travel through the digestive system in spore form until it reaches its favored habitat, the intestine [7]. This shows the importance of proper sanitation when dealing with patients infected with C. diff. as well as the need to completely disinfect the room with the proper cleaning protocols.

Upon reaching the intestine, C. diff. enters a vegetative state and begins to spread. It also begins to secrete toxin A, an enterotoxin and toxin B, a cytotoxin [8]. Toxin A works to create holes in cells, causing their contents to leak out. This presents as diarrhea in patients, as excess cell fluid enters the intestine. Cytotoxins simply cause damage to cells; it is not as narrow a category as enterotoxins. Toxin B causes damage to the cytoskeleton of cells which can cause inflammation and present as abdominal pain or colitis [9].

C. diff infection is characterized by several symptoms. It generally presents initially as diarrhea and abdominal pain, or colitis. This is directly caused by the toxins introduced by C. diff. This can lead to fever. Pseudomembraneous colitis is most commonly caused by C. diff. infection. If left untreated it is possible for this to progress to toxic megacolon which can lead to sepsis and death [10].

Cases of Clostridium difficile infection have been reported around the world.

As of 2008, 40 states reported instances of the most dangerous strain of Clostridium difficile, NAP1 that emerged in the early 2000s (Figure 1)

Highlights those states in the United States which have reported cases of the highly virulent strain NAP1. [http://www.cdc.gov/ncidod/dhqp/id_Cdiff_1] 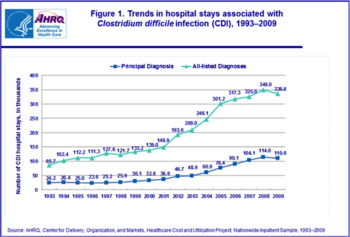 In 2009, a total of 336,000 hospitalizations were due to Clostridium difficile infection (CDI) [11]. Many of these cases were fatal, because that particular strain is highly virulent. It has mutated over time to resist several of the most widely prescribed antibiotics [12], so doctors and researchers are still grappling with new measures to not only treat the various strains of the infection but also prevent its growth and its further resistance over time.

Clostridium difficile is found on many surfaces – such as sinks, floors, and bed frames – in hospitals because it is commonly spread by spores that are resistant to commonly used disinfectants. Most outbreaks are reported in hospitals and long-term care facilities where cleaning agents are ineffective at preventing the growth of the spores, which can live in harsh conditions for months [13]. The infection can spread quickly because the spores are easily transferred between patients in close quarters, who are often highly susceptible to infection because of weakened immune systems due to antibiotic use or old age. Between 1993 and 2009, the total number of hospital stays for CDI treatment quadrupled, reaching its peak of 349,000 patients in 2008.

Last year, 3 deaths and 19 cases of infection were reported at United Memorial Medical Center in Batavia, New York [14]. The most recent outbreak occurred just last month at the Royal Victoria Regional Health Center in Ontario, CA in which 8 cases were reported within a 3 week period [15]. Hospitals in the vicinity had reported 26 deaths the year before [16], so the recurrence caused the hospital to close down 2 wards to contain the infection. Some of the more startling outbreaks include 199 cases and 26 deaths reported at Herlev Hospital in Denmark [17]; 3 hospitals in Ireland reported 31 deaths and a total of 375 infections [18].

A patient diagnosed with C. diff. colitis, the swelling of the large intestine due to a C. diff. infection, or CDAD, Clostridium difficile Associated Diarrhea, has a limited array of treatment choices.

This first treatment option is often used as a preventative/cautionary measure against C. diff.[19]. Probiotics are living, non-harmful bacteria that encourage healthy gut and colon function. They are capable of altering the flora of the intestinal tract; they add new microorganisms, and thereby foster a more competitive and difficult living environment for C. diff. [20].

Probiotics have also been shown to lower the pH of the gut, thus acting as a C. diff antimicrobial agent [21]. Specific probiotic bacteria that have been shown to be effective against C. diff. include Saccharomyces boulardii and Lactobacillus acidophilus. [22].

A common treatment course for patients with a ‘‘C. diff. infection is the administration of antibiotics. Vancomycin and Metronidnozole are two of the most commonly prescribed for a C. diff. infection, and are largely effective with an initial success rate of 90% [23]. However, C. diff. patients face a 25% recurrence rate after using either of these two antibiotics [24].

Interestingly, drugs used to stop diarrhea usually have an opposite effect on a patient with a C. diff. infection. These drugs slow the travel of stool to promote water reabsorption in the gut, but this extends expose to toxins associated with the infection.

Stool transplants have been demonstrated to cure C. diff. infections. The transplant, when performed correctly, replaces healthy bacteria flora that have been eradicated by antibiotics and reestablishes resistance to C. diff. They can be administered via enema, colonoscpoe, or a nasogastric tube [25].

Recent studies have found that fecal bacteriotherapy has a 90% success rate in eliminating all C. diff. bacteria from patients’ guts [26].

Scientific evidence proves that in hospitals, where Clostridium difficile is found to be the most present than any other setting, nearly all patients that develop the disease are exposed to antimicrobial medication. It has been demonstrated that the most effective method for preventing the outbreak of Clostridium difficile is the prescription of proper antimicrobial and antibiotic medication [27]. However, proper antimicrobial prescription and treatment is not as easy as it sounds. Studies have proven that roughly 50% of antimicrobial use in fighting the growth of C. diff. is inappropriate and may actually lead to the resistance of the C. diff. bacteria. Interestingly enough, however, through the scientific research of microbiologists, a decrease in Clostridium difficile in hospitals has been shown by actually limiting the use of antibiotics that are most strongly linked to the inhibition of C. diff., or by “limiting unnecessary antimicrobial prescribing” methods altogether [28]. This is due to the fact that the bacteria that are meant to be killed or inhibited by certain antibiotic treatments have actually become resistant to the medication due to their overuse and unnecessary prescription in some instances.

It has also been proven that infection control measures, such as wearing gloves when attending to patients with C. diff., have also been demonstrated as being effective procedures at preventing the proliferation of the disease by restricting the spreading of the bacteria in hospital settings [29]. Moreover, doctors and nurses washing their hands regularly while treating sick patients has also been found to kill the spores of the bacteria from hands polluted with the C. diff. bacteria [30].

[27-28] Lynne, V. McFarland, “Meta-Analysis of Probiotics for the Prevention of Antibiotic Associated Diarrhea and the Treatment of Clostridium difficile Disease,” American Journal of Gastroenterology, 2006