A Microbial Biorealm page on the genus Thermotoga petrophila 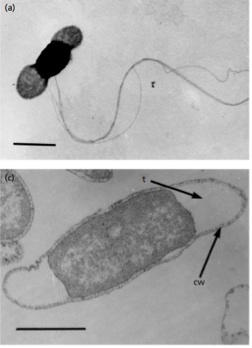 The temperature range in which this species grows is between 47-88˚C with an optimal growth occurring at 80˚C. The species exhibits growth in pH conditions between 5.2-9.0 with optimal growth at 8.0. The organism also exhibits growth in NaCl concentration from 0.1-5.5% with optimal conditions being 1.0%. Doubling time was measured at 54 minutes with glucose as a carbon and energy source.1

Like other hyperthermophiles, T. petrophila has garnered interest in the last decade for its thermostable enzymes that act to degrade organic materials. Thermostable enzymatic activity has been the subject of research as it has practical application in the production of biofuels, pharmaceuticals and feedstock chemicals. Pertaining to biofuels, as industries seek energy production methods as alternatives to fossil fuels, enzymes in hyperthermphilic bacteria and archae have shown promising results.5 One such hyperthermophilic laminarinase found in T. petrophila (TpLam) effectively cleaved the β-1,3-glucosidic bonds in its degradation of substrate, producing glucose, laminaribiose and laminaritriose. The purified TpLam was found to act effectively with a pH of 6.0 at high temperatures of 78˚C and 95˚C.6 This is promising in that these enzymes do not lose their stability when exposed to high temperatures.

Thermotoga petrophila RKU-1 was sequenced on September 1, 2007 at the DOE Joint Genome Institute. The genome is composed 1823511 DNA bases making up 1865 total genes, with the majority of genes (1810) being proteins. Fifty-five genes are associated with RNA. The single chromosome of T. petrophila is double stranded and circular.2

Species of the Thermotoga genus represent a deep lineage back to early bacteria. Gene sequence analysis for another species in this genus (Thermotoga maritima) shows that 24% of the genes translate back to an archaeal common ancestor.8 Through structural gene analysis, studies indicate lateral gene transfer between archaea and bacteria occurring sometime during the divergence of Thermotogales.8,11 Further studies suggest a link between a special archaeal specific reverse gyrase which has been found in many thermophilic bacteria. This special enzyme is thought to protect DNA from being denatured when cells are exposed to high temperatures by introducing positive supercoiling to the DNA.11 The exact mechanism by which this occurs is still the subject of debate, however, as other studies have shown that some hyperthermophiles use only negative supercoiling.12 Nonetheless, the fact that reverse gyrase is present in all known hyperthermophiles but absent in non-herperthermophiles suggest that is does play some role in the thermostability of these microbes.

More comprehensive and specific genomic information can be found at http://img.jgi.doe.gov/cgi-bin/w/main.cgi?section=TaxonDetail&page=taxonDetail&taxon_oid=6404271503

The entire genome sequence can be found at ftp://ftp.jgi-psf.org/pub/JGI_data/Microbial/thermotoga_petrophila_RKU-1/Finished2007/4002277.finished.fsa4

T. petrophila cells are rod-shaped and cell dimensions measure 2–7 μm long by 0.7–1 μm wide. This thermophilic species is motile, utilizing several lateral flagella for movement. The cell wall is typical of other gram negative bacteria with a thin layer of peptidoglycan with minimal cross-linking. Unlike other gram negative bacteria, species in the Thermotoga genus possess a peptidoglycan layer that does contain D-lysine and L-lysine.7

Unique to thermophiles in the Thermotoga genus, T. petrophila bacterium have a sheath-like outer membrane structure called a toga.1 The toga can form balloon-like protrusions on the ends of the rod shaped cells and this action creates a periplasmic space. The volume of this space can actually exceed the volume of the cytoplasm.7 The toga can be seen in the figure provided above.1

T. petrophila are heterotrophic obligate anaerobes and can grow in the presence of a variety of substrates. Growth has been detected when exposing the bacterium to medium including glucose, galactose, fructose, ribose, sucrose, arabinose, lactose, starch, maltose, peptone, yeast extract and also cellulose. This species can use these organic molecules as the sole source of energy as well as carbon through fermentation metabolism. One study reported lactate, acetate, H2 and CO2 as byproducts resulting from glucose fermentation.1 The cells can reduce elemental sulfur or thiosulfate to H2S, however, it was found that their cellular yields actually decreased when exposed to these electron acceptors.1

Mentioned above was the biofuel industry’s interest in hyperthermophilic enzymes involved in the catalytic breakdown of organic substrates. The major step in biofuel production is the degradation of an organic substrate such as cellulose into simpler sugars. It can take considerable energy to fuel reactions in order to break down cellulose and it is often done at high temperatures with varying pH levels. Using enzymes from thermophilic bacteria and archae which can tolerate these extreme conditions make them especially valuable. These thermostable enzymes can improve the efficiency of large scale reactions for biofuel production.9 Studies have indicated that specific purified enzymes from T. petrophila, along with enzymes from other bacterium in the Thermotoga genus, have effectively been able to function in the presence of harsh conditions, although the mechanism by which they are able to do so is still not well understood.9

More specific information regarding metabolic pathways can be found at the Joint Genome Institute’s website: http://img.jgi.doe.gov/cgi-bin/w/main.cgi?section=TaxonDetail&page=taxonDetail&taxon_oid=640427150 3

Given their need for high temperatures and anaerobic environments, T. petrophila have been found to inhabit production waters on oil reservoirs. These oil stratifications reach high temperatures and are largely devoid of oxygen, making them ideal for this species of bacterium.1 Although T. petrophila has not been found to grow in geothermal areas such as volcanic hot springs, other species of the Thermotoga genus have been discovered in these regions, leading to the possibility that such regions could sustain life.10

T. petrophila is non-pathogenic as the species has only been found free living in oil reservoirs.1,3 One study showed they exhibit some sensitivity when exposed to the antibiotics rifampicin, streptomycin, vancomycin or chloramphenicol. In fact, growth of T. petrophila was completely suppressed when exposed to these compounds.1

3. Overview of Thermotoga petrophila from the Joint Genome Institute: http://img.jgi.doe.gov/cgi-bin/w/main.cgi?section=TaxonDetail&page=taxonDetail&taxon_oid=640427150