Lake Michigan is one of the largest freshwater lakes in the world.[1] Its size makes it interesting area of study in terms of its microbial ecology. It can be seen as somewhere in the middle of the spectrum between highly productive small lakes and the oligotrophic ocean. Its importance to the surrounding communities also makes it an important area of study. 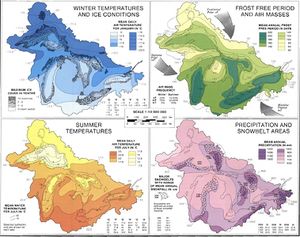 Map of the Great Lakes region, showing temperatures and precipitation from the EPA. 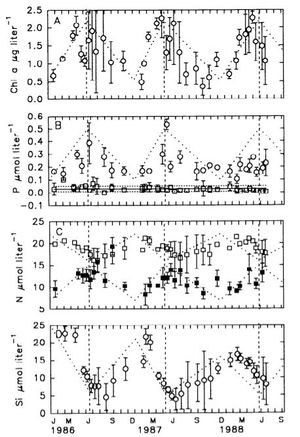 Lake Michigan is one of the five North American Great Lakes. It is the third largest of these by surface area. It is the second largest by water volume. The area of the lake is 57,800 km2. The volume of water in the lake is 4,920 km3. Its water retention time is 99 years. It is connected to Lake Huron via the Straits of Mackinac. At its deepest, Lake Michigan has a depth of 282 meters. The average depth of the lake is 85 meters.[1] The southern portion of the lake is more densely populated with the cities of Milwaukee and Chicago on its shore, as well as significant industrial activity and agricultural areas. The part has a more temperate climate. The northern portion is more sparsely populated with abundant forests surrounding it.[1] The lake is very important to the approximately 12 million people that live in the surrounding area. It is much colder on the northern portion. There are a number of small rivers that drain into Lake Michigan. The Chicago and Calumet rivers are the largest diversions of water from Lake Michigan.[1]


Lake Michigan becomes stratified during the summer months. The lower layer stays cooler and denser. This layer is referred to as the ‘hypolimnion’. The water closer to the surface is warmer and less dense. This layer is referred to as the ‘epilimnion’. There is a middle layer referred to as the ‘thermocline’ where a rapid temperature transition occurs. In the fall, turnover happens when the epilimnion cools and becomes denser. In the winter, ice cover on the top of Lake Michigan insulates the deeper water, which stays liquid. Turnover then occurs again in the spring when the top layer warms. The turnover and layering ensure that the lake stays oxygenated.[1]


The lake has been shown to be relatively plentiful in nitrate/nitrite and silica. Measurements have also shown low amounts of chlorophyll a and total dissolved phosphorus.[2] It has been shown that when turnover occurs total dissolved phosphorus increases in the lake. Following this nitrate and silica concentrations go down. In concert, the concentration of organic nitrogen and chlorophyll a increases.[3] This suggests that the system is phosphorus limited. Stable isotope data has been collected that suggests that nitrogen fixation is a significant source of nitrogen to the system.[4] 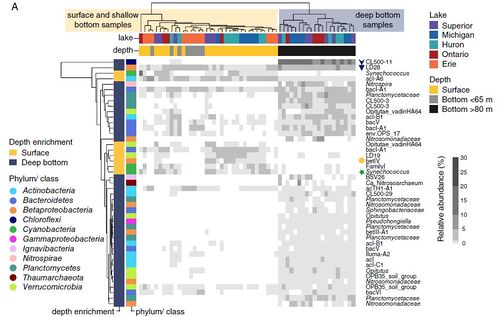 Figure showing the similarities between the Great Lakes in terms of composition and how the differences arise from depth. Figure comes from Paver et al. 2019.

The microbial ecology of Lake Michigan has been shown to be similar to the rest of the Great Lakes in composition. The same key taxa show up in studies of all five lakes.[2] The five lakes exchange water and based on results of some studies, it seems as though they exchange microbes as well. In terms of beta diversity, Lake Michigan is closer in composition to oligotrophic Lakes Superior and Huron, than to the more productive Lakes Erie and Ontario.[2]


Looking at the alpha diversity of Lake Michigan, the main difference in composition seems to come from depth in the water column. Cell concentrations are found to be 5-10 x 106 cell/mL near the surface.[2] As Lake Michigan gets deeper, cell concentrations progressively get smaller. Across the whole system dozens of oligotypes spanning Proteobacteria, Actinobacteria, Bacteroidetes can be found.[2] In the deeper waters (below 83 meters), the environment is characterized by low light availability and low temperature. Enriched taxa in the deep waters include Chloroflexi, Nitrospirae, and Planctomycetes.[2] In the surface waters, productivity is higher as well as temperature and light availability. Enriched taxa at this depth are Synechococcus and Methylophilaceae.[2]

Figure showing abundance of sewer/fecal indicators in the rivers near Milwaukee and Lake Michigan during dry periods and CSO events from Newton et al. 2013.


A detailed study of this effect used three infrastructure related genera: Acinetobacter, Arcobacter, and Trichococcus.[5] They also used five fecal-associated bacterial families: Bacteroidaceae, Porphyromonadaceae, Clostridiaceae, Lachnospiraceae, and Ruminococcaceae.[5] They found that during dry periods measurements of these indicators in Lake Michigan were almost zero, but after combined sewer overflow (CSO) events, these increased to comprise >2% of the surface water community.[5] Measurements of two of these indicators were found to have a footprint at least 8 kilometers offshore.[5] The effect of this on the larger ecosystem is unknown, but the research continues.

Figure showing abundance of key microbial species at depth across all the Great Lakes. Lake Michigan can be seen in the legend, but these numbers are similar for all the lakes. Taken from Paver et al. 2019.

One key oligotroph is a member of Naerolineaceae family of Chloroflexi, close in sequence to the CL500-11 sequence found in another lake. This is an uncultured organism that is found consistently across all the Great Lakes, but only at depths greater than 62 meters.[2] This species was nearly absent at the surface, but comprised 6%-19% abundance at depths greater than 100 meters.[2] Another oligotroph that was highly abundant with depth was Ca. Methylopumilus LD28, which is a Betaproteobacteria.[2] The transition from the surface to depth for this species was more gradual from scarce to abundant. This is another uncultured organism.


Two key players that were abundant at the surface were Synechococcus, a Cyanobacteria, and a Methylophilaceae betIV oligotroph, another Betaproteobacteria.[2] Synechococcus is a well-known genus that can be found in abundance in the oceans, as primary producers. Less is known about betIV. Its ubiquity in the surface of the Great Lakes system makes it an excellent research point.

Lake Michigan is one of the most important freshwater systems to humans. It is an excellent point of research to learn about oligotrophic environments and how human activity can impact them. In some ways, the ecosystem can be seen as a microcosm of the ocean. In others, it is a freshwater lake at the largest scale imaginable. In the interest of preserving this unique ecosystem, it is important to have a good understanding of the microbial workers at the base of the food web that make the system possible.