A Microbial Biorealm page on the genus Kulee 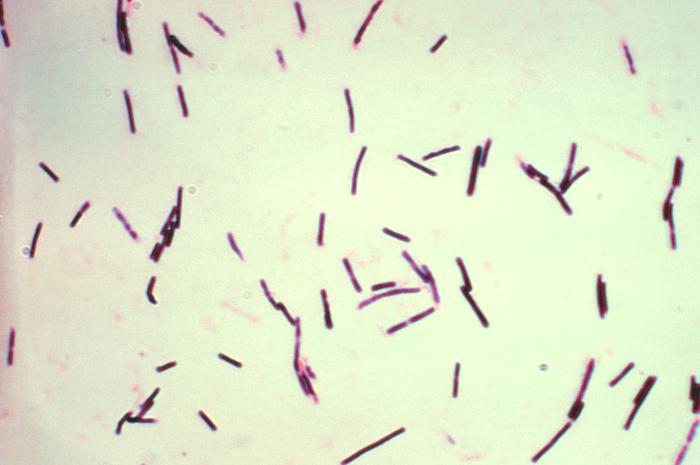 Clostridium perfringens is a rod shaped Gram-positive bacteria, which is a mesophile that has an optimal growing temperature of 37 C. It is a non-motile pathogen that produces endospores. This bacterium produces energy via anaerobic respiration using Nitrate as its final electron acceptor. Although C. perfringens is part of human normal intestinal flora, it is a pathogen responsible for many gastrointestinal illnesses with severity ranging from mild enterotoxaemia to fatal gas gangrene.

Clostridium perfringens are non-motile rod-shaped Gram-positive bacteria. It possesses the typical characteristics of Gram-positive bacteria, such as a protective thick cell wall, which is made up of peptidoglycan, surrounding an inner membrane. C. perfringens is a mesophile who has a fastest growth rate at the temperature of 37 C. When the spores of C. perfringens are exposed to a temperature of 105C for five minutes, their sensitivity to polymyxin and neomycin is increased significantly. Polymyxin is an antibiotic that damages the structure of the bacterial plasma membrane, making the cell membrane too fragile to maintain the osmotic equilibrium. Neomycin is a metabolic inhibitor that stops protein synthesis. Therefore, the chance of the spores surviving after experiencing the damages caused by high heat exposure is slim.

C. perfringens is an obligate anaerobic bacterium, who acquires energy through anaerobic respiration with Nitrate as its electron acceptor. There is an increase in growth when this bacterium is grown in the presence of Nitrate, because this inorganic acceptor allows more metabolites molecules to undergo substrate-level phosphorylation reactions, leading to an increase yield in energy production.

C. perfringens is categorized into five serotypes—A, B, C, D, and E—depending on the types of extracellular toxins they make and their types of tropisms. C. perfringens is a pathogen whose primary targets are human and animals. The bacterium can be found in many different habitats, such as the normal flora of human gastrointestinal (GI) tract, sewage and soil. Several common diseases associated with C. perfringens are food-poisoning, gas gangrene, and many veterinary diseases. C. perfringens enterotoxin (CPE) is the main virulent factor that initiates many critical GI diseases. When food contaminated with C. perfringens is consumed, CPE begins its membrane action in a unique four-step mechanism. The first step of the mechanism is the binding CPE to the target receptor on plasma membrane protein or claudin proteins, which leads to the formation of a small complex. The complex then undergoes physical change when it binds to other membrane proteins and forms a larger complex in the membranes, which results in the disruption of the membrane’s permeability. This usually leads to cell death, because the osmotic equilibrium is not maintained due to the breakdown of the membrane’s permeability. CPE is capable of forming a larger complex in the membrane and its toxic level is greatly enhanced when the first 45 N-terminal amino acids are eliminated. On the other hand, eliminating amino acids outside of residue 45 prohibits CPE from forming large complex, and thus loses its toxicity.

Using pulsed-field gel electrophoresis, researchers found that gastrointestinal (GI) diseases can also be non-food borne when the chromosomal CPE is carried by an episome. Antibiotic-associated diarrhea (AAD) is an example of non-food borne GI illness caused by plasmid CPE.