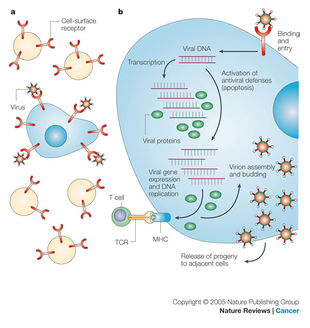 The current methods to treat cancers include radiation to damage DNA, cisplatin to stop transcription, or paclitaxel to decrease mitosis [2]. However, negative outcomes of the radiation and chemotherapy include toxicity to normal cells and resistance by cancer cells [1]. Thus, for many years, doctors and patients alike have desired a method to augment the chemotherapy and radiation therapy currently utilized for cancer treatment [1].

Oncolytic viruses have been shown to increase the rate of tumor reduction while also only targeting cancer cells and leaving the other cells intact [1]. In fact, these oncolytic viruses can be genetically engineered to be less pathogenic and most effective at reducing tumors [3].

Oncolytic virus treatment is mostly recognized as safe because these viruses are engineered to cause the least amount of stress on the body; any unnecessary adverse genes are removed while genes that aid in oncolysis are added [2,4]. Even if the virus happened to cause an adverse effect on the body, many oncolytic virus treatments can be eliminated by antiviral medication [2]. 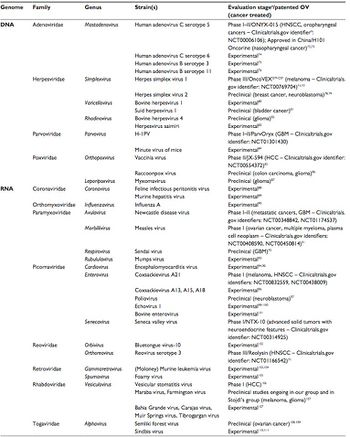 As sample of the many oncolytic viruses tested http://www.dovepress.com/oncolytic-viruses-a-step-into-cancer-immunotherapy-a8952 Pol et al.

Oncolytic viruses can be further tested with computational algorithms to simulate interactions within the body [2]. These calculated interactions can accurately predict dosage requirements and tumor fluctuations that can help model patient treatment plans [2].

In the early 1900s, doctors noticed that patients who suffered from cancer but who also were vaccinated against rabies displayed some signs of tumor regression. They also noticed tumor regression in patients who seemed to have a viral infection and cancer. Researchers noted these correlations and, in the 1920s, found that influenza and newcastle disease viruses were able to infect and lyse certain mouse cancers [1].

In the 1950s, researchers noticed a reduction of tumors in mice also injected with the encephalitis virus [2]. Later, wild adenovirus treatments for human cervical cancers showed some early regression, but eventually led to progression of the cancer which consequentially decreased interest in further research of oncolytic viruses [2]. The cause of this early issue may include the researchers’ early and limited understanding of viruses [2].

Originally, the immune system was thought to decrease the effectiveness of oncolytic viruses. Later research has shown that oncolytic viruses can specifically target the tumor cells so that human cells would not be harmed [2]. In this way, the virus would be optimized to target and kill cancer cells while also reducing the body's immune response. In fact, certain RNA interference methods are currently being used to specify the virus for tumor cells [5]. However, deleting parts of viral genomes to allow for greater selectivity can decrease the effectiveness of the virus [5].

Direct Treatment utilizes oncolytic viruses either with or without regular chemotherapy, radiation, and indirect treatment [1]. Viruses can be customized to better target these cancer cells in several ways, including the deletion of genes necessary for replication in non carcinogenic cells, but not in cancerous cells [2]. Oncolytic viruses can also be specialized to tumor cells by placing promoters and regulators from tumor genes into the virus genes [2]. In addition this oncolytic viral therapy has also responded well to the regular assault of radiology and chemotherapy [2].

Viruses actually treat the tumors in many ways. One of the more baseline methods merely allows the virus to multiply many times, overwhelm the cell, and kill the cell as the virus escapes [2]. Another method includes engineering the virus to produce necrosis factors or products that cause vascular shutdown in the cell [2]. Lastly, a virus may be engineered to produce products to initiate cellular death by apoptosis or pyroptosis [2,3].

Indirect Treatment involves using viruses to cause an immune response within the body and aid the anti-tumor immunity of cells and [1]. Oncolytic viruses help create an immune response when they kill cancer cells; the tumors release immune signals (HMGB1) which indicate the tumor’s location to the immune system and help dispose the immune system to continue to fight the cancer [3]. In fact, HMGB1 was found to be released after almost every tested oncolytic viral treatment [3]. 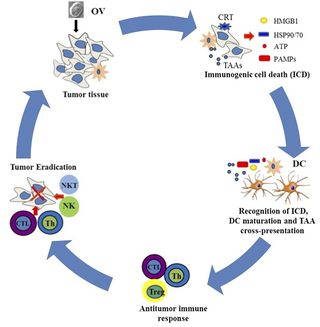 Oncolytic viruses have been engineered to help dispose cancer cells to chemotherapy. The virus can inject the genetic material to make an enzyme that activates proteins that aid in cellular death and slowing of RNA translation [2]. In addition, the viruses can also multiply the effects of radiation in tumors by injecting the code for transporters of radioactive material. Lastly, certain cytokines genes and angiogenic inhibitors have been engineered into oncolytic viruses to further increase the targeting of the cancerous cells for the immune system [2].

Adenoviruses can be constructed to specifically cause cancer cell death because of the overwhelming replicating virus [2]. In addition, the ONYX-015 variant of the adenovirus lacks the regular adenovirus gene that inactivates the p53 protein [1,4]. Regularly, p53 helps signal apoptosis upon infection of a viral cell; a regular cell infected by the oncolytic adenovirus dies to prevent spread while cancers with mutated p53 are able to harbor and grow the virus [1,4]. This ONYX variant is currently being tested in phase I and II clinical trials where patients have shown higher survival rates with lesser tumor activity as compared with regular cancer treatments [1].

Tumor promoters have also been used to specify adenovirus for cancerous cells [1]. One method is to splice a human promoter sequence highly active in tumor cells in place of the E1A gene used for viral replication [1]. Normal cells do not have the protein to activate this promoter, so the virus would selectively infect cancerous cells [1].

Like adenoviruses, herpes simplex viruses can be made to cause tumor cells death and to cause the tumor cells to become sensitive to the other cancer treatment methods [1]. The larger genome size of the herpes virus allows for greater manipulation of the genome as compared to adenovirus [1]. Furthermore, the herpes virus can be seen as safer to use than the adenovirus because of the wide array of antiviral medications that can act as an emergency stop if any issues arise with treatment [1]. Lastly, because the herpes genome does not include genes that allow for integration of viral DNA into host DNA, non-tumor cells are saved from potential insertional mutagenesis [1]. In testing with the herpes virus, 93% of the patients incurred remission and virus replication in the tumor compared with 60%-70% of previous tests [4]. This promising data has led to further phase III trials [4].

A certain mutant herpes virus, called HSV-1, is defective for ribonucleotide reductase [1]. This reductase is highly present in tumor cells, but more less prevalent in non-cancerous cells and causes the virus to selectively replicate in tumors [1].

The NV1020 variant of the herpes virus has shown a large reduction of pancreatic, prostate, and epidermoid (skin) tumor grafts in addition to regular radiation treatment and is currently in phase I clinical trial for colorectal cancer patients [1].

Like the adenovirus and herpes virus, the vaccinia virus has been used to kill cancer cells because of the large size of growth [1,4]. The vaccinia virus also is able to reach many tumors at once because it uses the host cell’s membrane to contain itself before spreading [4].

The vaccinia virus has been modified to selectively infect tumor cells using a deletion of SPI-1/SPI-2 genes in the virus that are highly active in cancer cells only [1].

While the adenovirus, herpes virus, and vaccinia virus have been modified selectivity infect cancerous cells, the reovirus inherently has this trait [1]. The reovirus activates ras protein which inhibits RNA-activated protein kinase (PKR) [1,4]. PKR regularly inhibits translation in a cell with an infected virus, but when infected with reovirus, this biological safeguard is turned off [1,4]. Because a ras mutation is common to many tumors, reoviruses actively infect these ras mutated cells [1]. 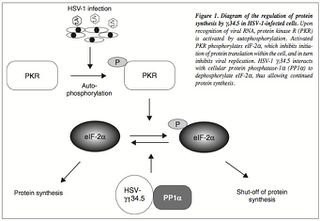 Diagram of the PKR pathway that can lead to inhibited translation when the cell is infected. http://theoncologist.alphamedpress.org/content/7/2/106.long Mullen

There is also ongoing research with reovirus therapy that attempts to use cellular carriers along with the oncolytic viruses to better target the tumor cells while also avoiding detection by the immune system [2]. During testing, the reovirus treatment did show an increased survival rate laboratory mice with cancer [2].

Because newcastle disease virus is central to chickens, it is not typically found infecting humans and is ideal for use as an oncolytic virus [1]. In a phase II clinical study, researchers found a 55% survival rate in test patients,15 years after treatment with the newcastle disease viral treatment [1]. Another particular strain known for it’s high tumor selectivity, PV701, showed a large amount of replication and tumor reduction and was not found to spread to other major organs.