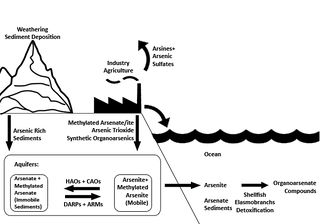 Ecological movement of arsenic and arsenic based compounds

Arsenic is a low abundance element in the earth’s crust. The metalloid is widely distributed in aquatic systems and in metal ores. [1] Arsenic pollution has resulted from human activities such as the use of arsenic based pesticides/animal feed, arsenic based chemical weapons and energy production. The main danger to human health is naturally occurring levels of arsenic found in subsurface aquifers[2], which can result in arsenicosis. Arsenicosis, a problem affecting tens of millions worldwide, is caused by consumption of arsenic contaminated water over long periods of time; it is a disease that leads to scarring of skin, reproductive issues and cancer.[4] Despite the toxicity of arsenic to most forms of life, several types of microorganisms exist that can tolerate it; some can even use forms of arsenic as electrons acceptors/donors. Microbial activity is known to mobilize arsenic in ground water, increasing concentrations and human exposures .[3] Conversely, other groups of microorganisms encode proteins involved in detoxifying arsenic compounds and are currently being investigated, namely arsenite oxidizers, for their potential in bioremediation.

Arsenic exists in the environment in several oxidative states (+5, +3, 0, -3) and nearly all of these states are dangerous to living organisms. Arsenate (As5+, in the form of AsO43-) is an analogue of phosphate and enters the cell mainly through phosphate transporters. As an analogue, arsenic replaces phosphate in many cellular reactions including oxidative phosphorylation.[5] Biological products with arsenic substitutions are unstable and are susceptible to arsinolysis, a phenomena hypothesized to be the result of the As-O bond length being ~10% longer than the P-O bond length.[6] Arsenite (As3+, in the form of AsO33-) is known to bind to thiol groups common in many proteins (due to presence of cysteine, disulphide bonds, etc.), altering function. As a result arsenite is even more toxic and affects a wider range of cellular processes than arsenate.[5] Highly toxic arsenic gases, the toxic agricultural product As2O3 and benign organoarsenic compounds are all found in relatively minor quantities in the environment.[1] When considering ecological impact, the two major species of arsenic in the environment are arsenate and arsenite. Due to the toxicity and availability of these two compounds, many microbes have developed defence mechanisms, while others are capable of utilising arsenic for energy.

Figure 1 Ecological movement of arsenic and arsenic based compounds

In the study of arsenic contaminated systems, the key microbes involved are usually categorised as follows1: DARPs: Dissimilatory arsenate-reducing prokaryotes. Despite the name these anaerobes are from both Bacterial and Archaeal domains and use arsenate as an electron acceptor, reducing it to arsenite.[1] CAOs: Chemoautotrophic arsenite oxidizers. These microorganisms use CO2 as a carbon source and use arsenite as an electron source, oxidizing it to arsenate for energy.[1] HAO: Heterotrophic arsenite oxidizers. Although these microbes use oxygen as an electron acceptor and oxidize arsenite to arsenate; they still require organic matter for anabolism.[1] ARMs: Arsenate-resistant microorganisms; these microbes reduce arsenate into arsenite, which allows for easier transport out of the cell. This process is not used for energy.[1] 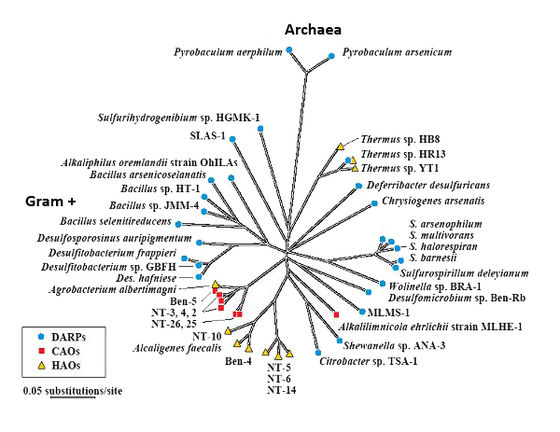 Arsenic is present in most anoxic and oxic aquifers as either arsenite or arsenate, respectively. Arsenate is more readily attached to inorganic surfaces, prominently Fe(III), thus its mobilisation is limited. The more toxic arsenite is less readily attached, leading to high partitioning in aqueous solvents.[3] Iron respiring bacteria reduces Fe(III) to Fe(II), which has a lower binding affinity to arsenate, this leads to the release of arsenate, which may be reabsorbed by other minerals.[8] If this this process takes place in the presence of DARPs or if the iron respiring bacteria are DARPs (as many bacteria can use multiple electron acceptors), arsenite will be released instead. In the presence of organic matter this process is significantly amplified.[9] Demobilization via conversion of arsenite into arsenate is mainly attributed to HAOs and CAOs. The heterotrophs primarily oxidise arsenic as a defence mechanism, converting arsenite encountered on the outer membrane using a periplasmic protein. . Many CAO’s oxidise arsenic for energy under anaerobic conditions, coupling the reaction to reduction of oxygen or nitrogen and using the energy to fix CO2 .[3] Unfortunately most mechanisms and proteins involved for CAO based oxidation are not well understood or known. Still, there is significant evidence that microbes play a crucial aspect in mobilisation of arsenic, and can act as catalysts for both demobilisation and mobilisation in aquifers.

Arsenic resistance is mainly coded on plasmids. It is widely distributed through related ARMs. The ars operon codes for arsenic reducing protein (ArsC) and arsenite transporters (ArsA and ArsB).[12]

Bioremediation of Arsenic and Future Research

Conversion of the more toxic and mobilized arsenite into readily mineralised Arsenate by CAOs and HAOs is being investigated as a source of bioremediation.[1] The field is starting to advance quickly due to the use of genome sequencing. Recently use of modern molecular techniques is leading the way for determining the full genomes of many organisms involved in the arsenic cycle.[10] The use of primers specific to the arrA gene for the dissimilatory arsenate reductase has led to the sequencing of DNA recovered from arsenic rich sediments.[11] The discovery of these genomes will greatly further the potential for bioremediation efforts while providing a greater understanding of the roles these bacteria play in the arsenic cycle.