Difference between revisions of "AIDS Dementia"

As recently improved antiretroviral therapies transformed AIDS from an acute condition to more of a chronic source of morbidity, AIDS patients are living longer with the disease. While the mortality rates have leveled in recent years, the HIV epidemic continues to grow (Meehan 226). The graph below illustrates the growing percentage of HIV/AIDS cases, as of 2007. One of the most significant causes of morbidity for patients with late stage HIV-1 is AIDS Dementia Complex (ADC). Often referred to as “the forgotten face of HIV disease” the neurocognitive and neurobehavioral complications associated with HIV are among the most degenerative complications (Meehan 225). 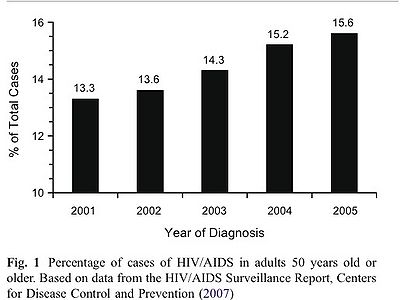 AIDS Dementia Complex differs from other cognitive conditions in that the disease is a “complex” that affects more than just intellect. AIDS Dementia Complex is characterized by a “wider involvement of the central nervous system” causing persistent cognitive decline, physical debilitation, and behavioral changes (Price). HIV-associated dementia is caused by a direct infection of the brain by the HIV virus itself, rather than by an opportunistic, secondary condition. Research indicates that the volume of the basal ganglia is significantly lower in individuals with AIDS Dementia Complex, resulting in the characteristic tremors and decreased motor skills (Meehan 226). Further distinctions include that neither neuropathy nor functional psychiatric disturbance are included within the definition of ADC (Price). Testing for AIDS Dementia Complex is done primarily through neuropsychological testing and is quantitatively compared to a set of norms in order to see if the symptoms displayed reflect the standard characteristics of ADC, or that of another neurological conditions. Another valuable component of diagnosis is neuroimaging. Neuroimaging is used to detect abnormalities associated with AIDS Dementia Complex and to detect other diagnoses(Price). Signs and symptoms of HIV/AIDS occur with immune suppression. Typically, CD4+ counts below 500-cells/ mL result in early symptoms such as fatigue, weight loss, and minor cognitive decline. It is not until CD4+ counts less than 200 cells/mL that defining conditions including HIV-related dementia begin to occur (Wise, et al. 810).

The cognitive and motor symptoms are the basis of diagnosis and ADC Staging. Since lapses in cognitive ability, such as loosing track of time or thoughts mid-sentence, are common with otherwise healthy people suffering from fatigue, early signs of ADC can go unnoticed. As opposed to these typical lapses in memory, ADC patients’ cognitive abilities suffer more frequently and to a greater degree. In the early stages of ADC multi-staged tasks become difficult. Cognitive loss is typically through the standard Mini-Mental Status exam. Research indicates that the first signs of cognitive impairment ADC patients exhibit is on reversal questions, such as reversing the five letters in the word “world,” sequential tasks, and remembering three objects (Price). Motor impairments are typically minimal in the early stages of ADC, yet some patients, such as athletes, may begin to notice a lack of agility and/or refinement in motor skills. The first signs of motor impairment for average patients include changes in handwriting, difficulty grooming, and, in more seveer cases, tremor or unsteady gait (Meehan 226). In these early stages of mild AIDS Dementia Complex it is important for healthcare providers to not overlook the symptoms are “normal” impairments. Diagnosis is particularly difficult for patients also suffering from clinical depression, as the two conditions can display similar symptoms (Price).

The table below (Fig. 2) summarizes the primary differences between early and later stages of AIDS Dementia Complex. 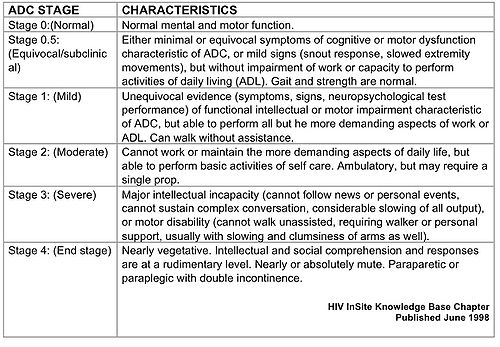 Fig. 2 summarizes the prominent symptoms of ADS. Each stage (0-4) marks the onset of more sever cognitive and motor symptoms.

Later stages of AIDS Dementia Complex are difficult to differentiate from other Central Nervous System (CNS) diseases, such as Alzheimer’s disease (Meehan 227). Late stage ACD patients suffer “global deterioration” of cognitive and motor skills, resulting in incontinence, unawareness of their illness, and socially inappropriate behavior (Meehan 227). Patients with more sever cases of ADC suffer from man practical problems, such as inability ability to work efficiently, recall information, and remember to take their medications (Price). Decreased motor skills may reach the point that patients are unable to walk on their own, requiring someone to walk with them or at times use of a wheelchair. Patients also generally appear apathetic, displaying what Richard W. Price, MD describes as “poverty of output” in conversations, meaning that patients are unlikely to contribute information unless directly asked to respond (Price). Occasionally ACD patients also exhibit behavior including mania and agitation (Price). Another aspect of late stage AIDS Dementia Complex is vacuolar myelopathy, which occurs when CD4+ lymphocyte counts are very low (Singh). Mortality rates dramatically increase when patients develop vacuolar myelopathy, typically dying within six months of onset (Singh). This condition effecting spinal cord function is typically clinically distinguished by disproportionate motor skill dysfunction compared to cognitive function, though this distinction is not always clear, as myelopathy is also frequently present in conjunction with neuropathy (Price).

Developed in the late 1990s, highly active antiretroviral therapy (HAART) is now the standard method of treatment for AIDS patients (Hardy 263). HAART corrects many of the immune defects caused by HIV and allows for maximal control of viral replication. HAART greatly reduces the incidence of late stage HIV complications. While HAART greatly helps reduce opportunistic infections, HIV is still able to cause disease in the central nervous system, which “acts as a reservoir if the virus, even with aggressive HAART treatment programs (Jevtović, et al. 561). Studies by Jevtović, et al. find that antiretroviral drugs have poor penetration in the central nervous system and struggle to suppress the virus in the CNS. The study concludes “high plasma protein blinding of protease inhibitors and their unidirectional efflux by P-glycoprotein membrane proteins in the blood-brain barrier limits the penetration and absorption of these drugs into the CNS,” yet other studies have shown that zidovudine (AZT) can cross these barriers through passive diffusion (Jevtović, et al. 564). Richard Price, M.D. indicates that a combination of at least three to four drugs should be administered, with nucleoside reverse transcriptase inhibitors (RTI), zidovudine, stavudine, and abacavir having the best penetration to the blood-brain barrier (Price). HAART treatments have led to a significant decrease in un incidence rates for ADS, as well as other opportunistic conditions involving the central nervous systems. From 1993 to 1997, within the HAART era, HIV dementia incidence rates decreased 43% (Wise, et al. 815).

With antiretroviral drugs successfully managing HIV/AIDS, more people are growing old with the disease. The number of people living with HIV/AIDS and associated conditions, such as AIDS Dementia Complex will increase in the years to come. A Centers for Disease Control and Prevention (CDC) report indicates that over 11 percent of cumulative HIV/AIDS cases have been identified in people over the age of 50 (Meehan 226). The number of adults 50 years old or over with HIV/AIDS has increased 59% from 2001 to 2004 (Hardy 269). Another study indicated that cognitive impairment related to AIDS dementia might be more severe in older HIV positive patients (Jevtović, et al 564). The Hardy study indicates “even a modest age difference within adults with HIV is associated with a decline in cognition that is mediated by a decline in speed of processing, a phenomenon has also been found in much older adults” (Hardy 265). The diagnostic process is more complicated for older patients, as AIDS Dementia Complex can easily be misdiagnosed as Alzheimer’s disease (Meehan 226). A study conducted by David J. Hardy and David E. Vance entitled “The Neuropsychology of HIV/AIDS in Older Adults” finds that older age makes HIV positive patients at a higher risk for cognitive impairment (Hardy 263). Extensive research shows a correlation between aging and cognitive changes, and the additional factor of HIV/AIDS adds a new dynamic in the aging process. The Hardy and Vance study found that “the odds of having dementia (HAD) in the older adults were 3.26 times that of the younger adults” (Hardy 266). The “graying” of America and advancements of HAART suggest that the relations between age, HIV/AIDS, and associated neurological conditions will be an increasingly important field of research in the future. On the other end of the issue of ADC and age, a syndrome similar to adult ADC also affects pediatric AIDS patients. The pediatric condition occurs more frequently and with much higher morbidity. Cognitive problems associated with pediatric AIDS involve both cognitive and motor problems and often a reversal of pediatric milestones (Price).

As with most cognitive conditions, AIDS Related Dementia patients are often dependent on the assistance of some sort of caregiver. Complications of cognitive and motor dysfunctions such as home safely, violence, decreased mobility, and agitation make many patients dependent on family members or other assistant. The emotional strain placed on caregivers spreads the burden of disease beyond simply the patient. The lingering social stigma and ignorance surrounding HIV/AIDS can make finding support a difficult task for patients. Caring for patients with any kind of dementia, whether Alzheimer’s disease or ADC, can leave caregivers with a sense of isolation, fear, and helplessness. As Rebecca A. Meehan, PhD, et al. point out in “An Overview of AIDS dementia complex,” families of ADC patients may have an especially hard time coping with the disease because it may be the first time families confront possible drug abuse or sexual practices that led to the disease.

AIDS Dementia Complex has steadily rising incidence rates. There are approximately 10,000 new cases of ADC in the United States per year (Meehan 228). The neurological problems associated with later stages of HIV-1 are an all too forgotten aspect of the global AIDS epidemic. Given the difficulty of diagnosis, especially in older patients whose symptoms mirror those of other age-related cognitive disorders, it is imperative that caregivers are informed about the symptoms of early stage dementia and provide aggressive antiretroviral therapy to the patient. The growing incidence rates of AIDS Dementia Complex is reflective of the trend in global health issues that as medical treatments advance, the standards of health refine. In the early years of the AIDS epidemic, HIV patients typically did not have the medical treatments available to survive long enough to reach the late stages of the disease. With the development of HAART in 1996-1997, the demographics and nature of HIV-infection have rapidly changed (Hardy 263). The study of AIDS related dementia is a constant source of developing research. Recent research published by the National Institute of Mental Health in September 2009 found that people with HIV subtype D were more likely to develop HIV-associated dementia. This study led by Ned Sacktor, M.D of the Johns Hopkins Bayview Medical Hospital is fundamental to future research, as it is time first research showing a connection between HIV subtype and the likelihood of developing HIV-associated dementia (NIMH). This study conducted in Uganda on patients who had not previously received highly active antiretroviral therapy (HAART) is an important building block towards further refinement of HIV/AIDS treatments, but more research is necessary to confirm the connection between HIV-subtype D and dementia.