Vibrio fischeri is a Gram-negative luminous bacterium belonging to the Vibrionaceae family, which includes many bacterial species that are marine γ-proteobacteria and engage in a diversity of pathogenic or beneficial interactions with animal tissue. The marine bacterium V. fischeri is best known for its symbiotic relationships with squids and fishes. However, V. fischeri is found throughout the world in temperate and subtropical regions as members of the microbial gut community in many marine animals or existing as free-living saprophytes. The symbiotic relationship between V. fischeri and the squid Euprymna scolopes has been extensively studied primarily because of the ability of V. fischeri to produce luminescence by expressing the lux operon, a cluster of genes found in several of the Vibrionaceae. Luminescence allows the squid to camouflage itself and evade bottom-dwelling predators of the ocean because the light produced is emitted downward. The squid can manipulate the light that V. fischeri produces to match the intensity of the light that the moon and starlight reflects downward onto its body. V. fischeri is housed within a specialized light organ within the squid's mantle cavity. The light organ consists of host tissues that include crypt spaces that contain the bacterial symbionts.7

In the squid-vibrio symbiosis, the squid can select from different V. fischeri strains to find the most suitable symbionts. Establishing symbiotic relationships in aquatic environments can be a challenge because there are low to undetectable concentrations of the specific symbiont cells that colonize the tissues of animal hosts. The colonization of the E. scolopes light organ by V. fischeri cells is the topic of current research and usually occurs within twelve hours after the juvenile squid hatches.2 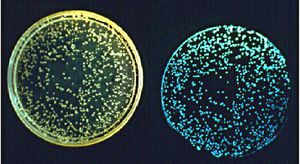 Recruitment of the Symbiont

The ciliated field of the surface epithelium surrounds a set of three pores and during initiation of the symbiosis, V. fischeri cells enter these pores, travel down ducts, and colonize the internal spaces of the organ.2 Specifically, V. fischeri cells associate with the host in two steps. Attachment to the cilia occurs first followed by aggregation of the harvested population. In the absence of V. fischeri cells, other Gram-negative but not Gram-positive bacteria will aggregate. When V. fischeri cells were present, they exhibited a competitive dominance over three or more hours, and were the only cells present in the aggregates.1 Elimination of other bacteria species requires a complex host-symbiont dialogue across the ciliated surface epithelium.1 Recent studies have found that within a few hours after introducing V. fischeri cells into seawater containing E. scolopes, currents aggregated the bacteria and these aggregates were embedded in a mucus-like material above the light organ pores. Ciliary-mucus currents allow invertebrate tissues to interact with food particles in the environment. 2 The harvested V. fischeri cells travel toward the crypts after entering the pores and no matter how many cells migrate through the pores, only one or two make it to the crypts, similar to the bottleneck effect. Then, the bacterial cells begin to divide, eventually filling the crypt spaces. Thousands of species of bacteria interact with the surface of E. scolopes organ, but only one or two strains of V. fischeri cells inhabit the deep crypts. 1

The path of V. fischeri cells to the site of inoculation of the E. scolopes light organ (right) and one side of a hatchling light organ, highlighting the location of the three pores at the base of the appendages of each ciliated field (left). [2]. 2

Furthermore, V. fischeri cells required a minimum amount of time to reside within the squid secreted mucus before colonization of the bacteria in its host was initiated. Normal colonization resulted when the bacterial cells accumulated in the mucus for the first few hours and after four to six hours after initial inoculation, V. fischeri cells migrated away from the mucus and into the pores, eventually proliferating into the crypts.2

Specificity of Colonization
V. fischeri is competitively dominant over other species of bacteria over space along the epithelial ciliated surface of E. scollops. In one study, V. fischeri cells were added to unfiltered environmental seawater at concentrations ranging from 103 cells to 106 cells per milliliter. Hatchling squid were exposed for four hours to this water, and V. fischeri cells formed tightly packed aggregations, regardless of the proportions of non symbiotic bacteria. V. fischeri cells accounted for more than ninety-nine percent of the cells in the aggregations. The ability of one bacterial species to outcompete another for a space to adhere onto mucus is not uncommon among species of bacteria. Once inside the light organ, strains of V. fischeri compete to inhabit the deep crypts and strains with higher fitness dominate the light organ.3

Motility
Motility is the best understood characteristic of V. fischeri that is important for symbiosis. Symbiont cells that are incapable of motility cannot colonize the organ by navigating through the duct.4 When nonmotile mutants were tested for the ability to colonize the squid light organ, none were capable of initiating a symbiotic relationship. Whether or not a flagellum is also required for adherence to host tissue remains to be studied. During initiation of the colonization process, bacteria are not only swept along by the host's epithelial ciliary movement, but actually propel themselves into the crypt spaces of the light organ.5

Lux Genes
In a study carried out in 2000, researchers found that mutant V. fischeri strains that are defective in light production cannot persist in the organ and are eliminated from the organ if they are not producing luminescence.4 Specifically, luxA, luxI, and luxR mutants of V. fischeri express less than 0.1% of the luminescence of their lux+ parent strain. Luminescence mutants of V. fischeri also fail to elicit cytoplasmic swelling in the epithelial cells that line the light organ. Wild-type strains of V. fischeri were also found to outcompete strains that are defective in light production. LuxA encodes an enzyme that catalyzes the light-producing reaction and the luxI and luxe genes are associated with quorum sensing and induction of the lux operon. 6

The relationship between the Hawaiian bobtail squid Euprymna scolopes and the Gram-negative bacteria Vibrio fischeri has been studied for more than fifteen years as a model for the establishment of a horizontally transmitted symbiosis. One of the main challenges of a horizontally transmitted symbiosis is the acquisition of a microbial symbiont by the host from the environment. Tissues that the host maintains as a juvenile animal allows it to harvest and maintain specific symbionts. Colonization of the host occurs in a series of steps but the symbiont is an active partner in this process. The ability of V. fischeri to colonize the squid's tissue is in large part due to its viability and motility. Viable and motile V. fischeri are the only bacteria that can navigate through the pores and into the ducts of E. scolopes. Viable bacteria also form dense aggregations while motile bacteria can outcompete other bacteria for space. Bioluminescent V. fischeri can colonize the host's crypt epithelium for a long period of time.