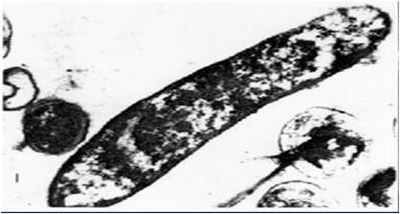 A. ferrooxidans is a Gram negative rod shaped bacterium that is commonly found in deep caves or acid mine drainage, such as coal waste (10, 11, 12). These acidophilic bacteria thrive in optimal pH level of 1.5 – 2.5 where they convert insoluble metals to their soluble state. Even low concentrations (ppm) of these metallic ions would be extremely toxic to other bacteria (7, 8). In addition, these bacteria have been utilized in industrial bioleaching efforts to extract otherwise unobtainable metals (9).

Two strains of Acidthiobacillus ferrooxidans have been successfully and completely sequenced. The strains sequenced are ATCC 53993 and ATCC 23270 which consists of genomic sizes of 2.88kb and 2.98kb respectively. Acidithiobacillus ferrooxidans contains a single circular chromosome consisting of around 3,000 genes. The greater majority of species sampled from multiple sites around the world were shown to contain plasmids, however ATCC 23270 did not contain a plasmid (15). ATCC 23270 contains a rich region of recombination which includes phage, transposases, and psuedogenes shown in the black triangle located in Figure 1. 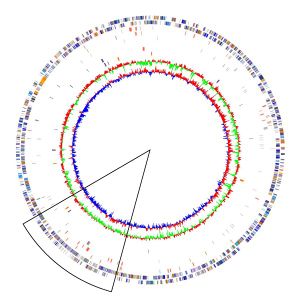 A. ferrooxidans is a chemolithoautotrophic bacterium which can use many different electron donors to support growth. In addition, a primary habitat consists of acidic conditions producing a strong reducing environment. The cell is able to maintain homeostasis with a neutral pH of 6.5 within the cytoplasm preventing damage and a reducing environment in periplasm. This allows an increase in redox potential of O2/H2O to 1.12 V at pH 3.2 yielding higher energy when coupled with an electron donor (13, 14).

In aerobic conditions, electron donors may include ferrous ions or sulfur compounds which are oxidized into ferric iron and sulfuric acid, respectively, yielding high energy (3, 4, 5). However, during anaerobic conditions ferric ions can replace oxygen as the electron acceptor with multiple substrates donating an electron (Figure 2B, 6). This pathway yields less energy than aerobic conditions, but energy can still be produced for growth. 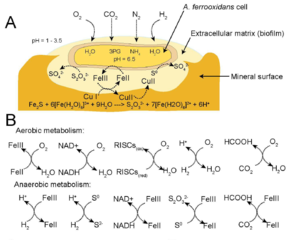 Acidithiobacillus ferrooxidans. Figure 2: A: Example of bio-leaching. B: Aerobic and anaerobic pathways to yield energy for the bacterium (15)."

Bioleaching, or biohydrometallurgy, are methods performed by industries to utilize A. ferrooxidans ability to oxidize metals from ore. Essentially, A. ferrooxidans oxidation metabolism is beneficial since it can attack insoluble sulfide containing minerals (i.e. copper, lead, zinc and nickel) and covert them to soluble metal sulfates (19). Currently, bioleaching involves a microbial community, not just one organism, to extract desirable metals from unrefined ores. Traditional concentration and smelting techniques produce hazardous byproducts, whereas A. ferrooxidans are a clean alternative. Coal can contain undesirable sulfur compounds created by natural weathering processes. This undesirable sulfur can be solubilized by A. ferrooxidans and removed by washing techniques; this process is known as desulfurization (20). Furthermore, these techniques have shown significant promise in a few other areas. Recycling of computers and electronics produces copious amounts of dust-like materials that are the result of shredding and separation. These dusty residues are known to contain valuable concentrations of metals that would otherwise be incinerated or discarded. In one experiment, over 90% of the available Cu, Zn, Ni and Al was leached out of this computer circuit board dust (21).

18. Gurung , Anirudra and Ranadhir Chakraborty. 2009. “The role of Acidithiobacillus ferrooxidans in alleviating the inhibitory effect of thiosulfate on the growth of acidophilic Acidiphilium species isolated from acid mine drainage samples from Garubathan, India”. Can. J. Microbiol. 55: 1040-1048.