Fig 1Summary of known major metabolic processes absent or present within A. capsulatum.*Presence of some of the genes required for pathway (2)

Acidobacteria capsulatum (A. capsulatum) is still a relatively new species since its official classification in 1991 but progress has been made towards elucidating the properties and ecological significance of the species. A. capsulatum are gram-negative, acidophilic, heterotrophic, facultatively anaerobic and rod shaped bacteria (1).

A. capsulatum are known to possess flagella that allow motility within the environment (1). The flagella themselves are peritrichous or found all over the surface of the cell. Another characteristic of this organism is the presence of high amounts of exopolysaccharide coating the cells from soil isolates (2). Exopolysaccharide’s function falls into four broads categories: protection, adhesion, an adaption response or cell-cell interactions (3). This contributes to the competitiveness of A. capsulatum, for example, having increased adhesion can allow the bacterium to acquire nutrients more readily from the environment.

Members of this phylum are presumably ubiquitous in soil environments and A. capsulatum could potentially play a major role in the fluxes of carbon,nitrogen and iron across microbial communities due to its metabolic processes (Fig 1) and distribution in soils.

A. capsulatum, though first isolated from acidic drainage (1), are presumed to be widely distributed in soils as evidenced by the detection of their phylum’s 16s rRNA sequences across a diverse range of environmental samples (4). Soil samples from Australian forest and Arizona indicated that A. capsulatum was present in the microbial communities. Additionally A. capsulatum also extends its presence to rhizosphere soils, the interface between the plant root and microbial community. Here, members of the Acidobacteria phylum including A. capsulatum were found to have represented a majority of the 16s rRNA sequences found there (5). A. capsulatum then may play a role in the geochemical cycles within these soils.

A. capsulatum prefer to exist in conditions where the soil or the microenvironments within it provide a pH range of 3.0 – 6.0 (6). In addition, they are frequent and sometimes dominant in iron-rich environments such as abandoned mines (2). This can be attributed to their mode of respiration, iron-reduction, which can play a significant role in iron cycling in these environments.

A. capsulatum are facultative anaerobes (7), though previously they were described to be aerobic when they were first discovered (1). When oxygen concentrations are low or depleted, A. capsulatum are able to use dissimilatory ferric iron reduction (6). As ferric iron exists more favourably in low pH levels, the tolerance to acidity appears adaptive for these microbes (Fig 2). The frequency of A. capsulatum in soils may reflect the important role it plays in the iron cycle and microbial community by providing ferrous iron, produced from ferric iron reduction, for nutrient uptake in organisms.

A. capsulatum has the genes required for cellulose synthesis, allowing the potential production of bacterial cellulose. This is unique for A. capsulatum as the genes are rare in non-proteobacterial genomes. Bacterial cellulose biofilm is hypothesized to be able to promote and facilitate adherence to ferric-iron substrates (8), which can be quite useful in nutrient starved environments. Furthermore, the benefits of cellulose biofilms also include protection from desiccation or drying out and physical support. A. capsulatum then would seem to be equipped to survive in stressful environments.

A. capsulatum may express an addiction module, or a toxin-antitoxin system (2). Toxins produce by this system are known to inhibit DNA synthesis and relatedly, protein synthesis (9). This system allows A. capsulatum to adapt to environments where nutrients are scarce by reducing its requirement for energy.

A. capsulatum may be capable of denitrification, as nitrate reductase genes analogous to those found in cyanobacteria were present within A. capsulatum’s genome (2). They are however, capable of nitrite reduction.

The diverse modes of respiration and survival mechanisms in the A. capsulatum’s repertoire highlights its ability to adapt to a range of environments and could explain its abundance in soils, where conditions can change rapidly and the scarcity of terminal electron acceptors limit cell growth. 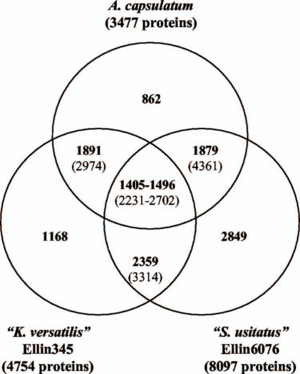 A. capsulatum has a relatively small genome size of approximately 4.12 million base pairs, whereas other Acidobacteria species such as K. versatilis and S. usitatus have about 5.65 and 10 million base pairs respectively. The size of A. capsulatum’s genome is attributed to it being more specialized in comparison to other members of the phylum, being able to degrade less substrate than the others. Comparative genome analysis between the three bacterial species (Fig 2) showed most of the shared genes encoded for conserved cell function. Genes that were different represented some difference in pathways and substrate preference. For example, unlike the other two, A. capsulatum does not encode cellulases from the family 1 Beta-glucosidases, suggesting the lack of cellulose degradation for A. capsulatum. Interestingly, A. capsulatum has the genes required for cellulose synthesis (2).

There is research being conducted by researchers at Fort Lewis College, investigating A. capsulatum’s complete metabolic pathway and enzymes (11).

Relatedly, future research as suggested by Ward et al. should be directed towards understanding how A. capsulatum functions in a living system or ecosystem in order to elucidate gene function (2).