Difference between revisions of "Actinomyces naeslundii"

A Microbial Biorealm page on the genus Actinomyces naeslundii 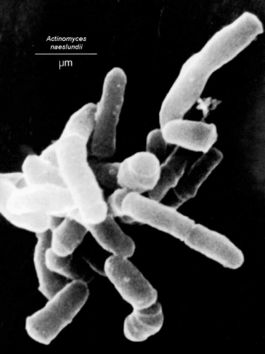 Actinomyces naeslundii is a gram-positive, rod-shaped, non-spore-forming, non-acid-fast, facultative anaerobe found in the oral cavity of humans and other animals. This non-motile bacillus is one of only a few gram-positive bacteria characterized as having fimbriae (Wu et al., 2001). The type 1 fimbriae of A. naeslundii mediate adhesion of this organism to the tooth surface (Chen et al., 2007). This microorganism is mesophilic and grows in temperatures ranging from 15°C to 40°C with an optimum growing temperature of 37°C, the normal human body temperature. Actinomyces naeslundii is commonly found in large numbers in the oral cavity and is a major component of dental plaque. It has also been linked to root caries, periodontal disease and even opportunistic infections such as actinomycosis.

Actinomycosis is a chronic bacterial infection caused by certain species of the genus Actinomyces such as A. naeslundii, A. viscosus and A. odontolyticus. The most common clinical form of actinomycosis is cervicofacial, but thoracic and abdominal actinomycosis, as well as pelvic actinomycosis in women, are also possible. Common infection sites are decayed teeth, the lungs and the intestines. However, Actinomycosis can occur in nearly every organ and the infection is usually a mix of several Actinomyces and other bacterial species, including gram-negative species (NCBI). Actinomycosis is often hard to identify and is sometimes referred to as the "most misdiagnosed disease" (Jin et al., 2001).

The fimbriated cell surface of Actinomyces naeslundii give the microbe a "fuzzy" appearance. It is the type 1 and type 2 fimbriae that allow the bacteria to adhere to different surfaces. The type 1 fimbriae, for example, help them attach to tooth surfaces and collagen through adhesion-receptor binding, while type 2 fimbriae bind to β-linked galactose and galactosamine appendages on epithelial and bacterial surfaces (Tang et al., 2004).

Actinomyces naeslundii obtains energy from the fermentation of carbohydrates. Some of the phosphorylating enzymes involved in A. naeslundii metabolism, such as PPn and PPi, are unique to that species and have not been found in other oral bacteria (Takahashi and Yamada, 1999). It may be these enzymes, along with glycogen synthesis and lactate utilization that contribute to the efficient energy metabolism of A. naeslundii. Aside from the many enzymes that this organizm can produce for hydrolyzing carbohydrates, it can also produce enough ammonia to control the pH levels in its surrounding environment. The production of these molecules allow A. naeslundii to adapt well to changing conditions and compete with other microbes in the environment.

A. naeslundii normally inhabits the oral cavity of animals including humans. This microbe exists symbiotically with a large oral community. The normal microflora of the mouth is composed of hundreds of species of bacteria that coexist and interact. As discussed above, A. naeslundii has a selective advantage over many bacteria because of its capacity to maintain pH homeostasis and is well adapted to compete for nutrients and adhesion sites in this dynamic microbial environment.

Actinomyces naeslundii is primarily associated with oral plaque, but may also be a factor in periodontal disease and opportunistic infections when invading tissues. It is part of the normal flora in animal hosts including humans. Periodontal disease is often a result of inadequate oral hygiene which causes bacteria to infect the gum tissue. Oral and cervicofacial diseases involving A. naeslundii normally result from carious teeth, trauma or dental procedures such as tooth extractions. This microorganism is not virulent and therefore requires a loss of mucosal integrity and the presence of devitalized tissue to infect deeper body structures and cause human illness (Polenakovik et al., 2006).

Although A. naeslundii has been associated with certain diseases it is usually not pathogenic. Almost all infection sites containing A. naeslundii also contain companion bacteria which appear to magnify the low pathogenic potential of actinomycetes. These organisms include Actinobacillus actinomycetemcomitans, followed by Peptostreptococcus, Prevotella, Fusobacterium, Bacteroides, Staphylococcus, and Streptococcus species, and Enterobacteriaceae, depending on the location of the actinomycotic infection (Polenakovik et al., 2006).