Difference between revisions of "Adenoviridae" 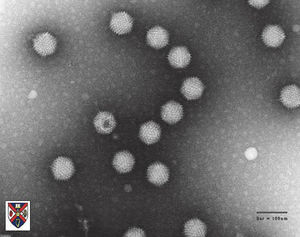 Currently, research is being done to see if adenoviruses could be used as a treatment for cancer. After going through extensive engineering to remove the genes which control viral replication (which also creates room to insert genes which are of therapeutic interest), adenoviruses become a promising agent for killing tumor cells. (For more information on the use of adenoviruses in cancer treatment, see Curiel and Dani)

Adenoviruses have linear, non-segmented, double stranded DNA which is around 30-38kbp (though the size varies from group to group). The complete genome is 35800-36200 nucleotides long. A 55kD virus coded terminal protein is covalently attached 5' end of each strand. The terminal sequences of each strand are inverted repeats. Because of this, the denatured single strands can form "panhandle" structures. (sources: ICTVdB, Davison et al.)

Virion Structure of a Adenovirus

Adenoviruses are non-enveloped icosahedral viruses measuring 60-90nm in diameter and containing double-stranded DNA. The structure of an adenovirus virion is simple, consisting of a capsid, fibers, a core, and associated proteins. A protein core inside the outer icosahedral protein capsid contains the genome. The capsid is comprised of 252 capsomers (12 of which are pentons, 240 of which are hexons). Trimeric fibers project from the surface and are attached to a penton. (sources: ICTVdB, Davison et al.)

Reproduction Cycle of an Adenovirus in a Host Cell

The life cycle of an adenovirus is divided into early and late phases, separated by the DNA replication process. In the early phase, the virus attaches to a cell with its fibers. The penton base protein interacts with the host cell integrins, and the penton is internalized by the host cell through receptor-mediated endocytosis. The penton is disassembled as it is transported to the nucleus, where the viral particle releases its DNA. The viral DNA takes over as terminal protein attached to the end of the DNA strand initiates transcription. The early genes are responsible for making regulatory proteins, which alter the host proteins to prepare for DNA synthesis, activate other virus genes, and provide protection from the host's immune system. Viral DNA replication now occurs.

The late phase begins when the late genes are expressed during DNA replication. These genes produce proteins that are involved in virus particle assembly. The host's cellular processes are shut down as transport of mRNA to the cytoplasm is blocked when the late genes are expressed. Viral mRNA is transported to the cytoplasm and translated instead. Virus assembly occurs. Finally, the host cell dies due to a build-up of adenovirus death protein. As the cell dies, the new virus particles are released from the cell. (sources: Viral Bioinformatics Research Center, ICTVdB)

Adenoviruses infect many different species in many different ecosystems. According to the Centers for Diesease Control and Prevention, they can survive for long periods of time outside the body due to an unusually high resistance to chemical or physical agents and adverse pH conditions. Transmission is usually through direct contact, fecal-oral transmission, or waterborne transmission.