Aeromicrobiology is the study of living microbes which are suspended in the air. These microbes are referred to as bioaerosols (Brandl et. Al, 2008). Though there are significantly less atmospheric microorganisms than there are in oceans and in soil, there is still a large enough number that they can significantly affect the atmosphere (Amato, 2012). Once suspended in the air column, these microbes have the opportunity to travel long distances with the help of wind and precipitation, increasing the occurrence of widespread disease by these microorganisms. These aerosols are ecologically significant because they can be associated with disease in humans, animals and plants. Typically microbes will be suspended in clouds, where they are able to perform processes that alter the chemical composition of the cloud, and may even induce precipitation (Amato, 2012).

Along with water droplets, dust particles and other matter, air contains microbes (Al-Dagal 333). Microbes follow a particular pathway in which they are suspended into the atmosphere. First they are launched into the air. The source of the launching of airborne microbes stems from humans, animals and vegetation. (Al-Dagal 333). then they are transported (by various methods including winds, machinery and people) and finally are deposited somewhere new. The atmosphere can have a variety of physical characteristics, and can be very extreme in terms of the relative humidity, temperature and radiation. These factors play a huge role in what kinds of microbes will survive in the atmosphere and how long they will stay alive. (Pepper et. Al, 89)

One area that bioaerosols can be found in is within clouds. Cloud water is a mixture of organic and inorganic compounds suspended within moisture (contribution of microbial activity yo clouds). The conditions in clouds are not conducive to much life, as microbes present there must withstand freezing temperatures, the threat of desiccation, and extreme UV rays. Clouds are also an acidic environment, with a pH ranging from 3 to 7. Nevertheless, there are extremophile microbes which can withstand all of these environmental pressures. Clouds serve as a transport for these microbes, dispersing them over long distances. (Amato 1)

Below is a representation of the life cycle of microorganisms in the atmosphere. The main steps are indicated in the grey boxes. 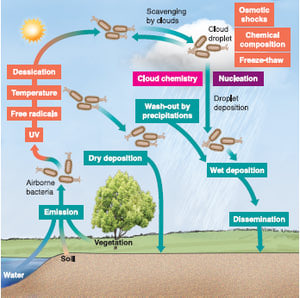