Difference between revisions of "Aeropyrum pernix"

A Microbial Biorealm page on the genus Aeropyrum pernix

The Aeropyrum pernix is an aerobic archaeon and is spherical in shape with a diameter of about 1 micro meters. It grows optimally at pH 7.0 and at a temperature of 95 degrees celcius and a salinity of 3.5%. This archaeon is important enough to have its genome sequenced because it can help answer how the Aeropyrum pernix is able to consume oxygen in such an extreme environment. Only anaerobic Archaea were found in such living conditions, until the discovery of the Aeropyrum pernix. Aeropyrum pernix was isolated at a hydrothermal vent at kodakara island in Kagoshima Prefecture by a team of researchers at Kyoto University in 1993. The whole genome was sequenced by using the shotgun sequencing approach.

The genome is composed of 1,669,695 base pairs and contains 14 tRNA genes with introns, like the P. horikoshii’s genome (anaerobic Archaen) (1). It has a single circular chromosome. Some interesting features of this genome is that all the genes in the TCA cycle were found except for the alpha-ketoglutarate dehydrogenase gene and instead two sets of genes coding for the subunits of 2-oxoacid:ferredoxin oxidereductase were found in its place. One set is encoded in ORF’s ape2126 and ape2128 and the other in ape1473 and ape1472. These enzymes use pyruvate as a main substrate (2). Through sequence comparison among the assigned ORFs, most of the ORFs in the Aeropyrum pernix were generated by a sequence duplication. Around 89.12% of the whole genome consisted of RNA coding regions and the assigned ORF. The GC genome content is 67%

The cell envelope of Aeropyrum pernix is a S-layer and is Gram-negative. S-layers, which are found mostly on Archaea, consists of proteins in a crystallized pattern which serves a way for cells to protect themselves. An interesting feature of Aeropyrum pernix is that it does not require sulfur containing compounds for growth and so it does not generate any H2S during growth. It is a heterotropth that uses various types of amino acids and sugars. It uses aerobic degradation of complex porteinaceous substrates for energy and grows optimally at 95 degrees C. Transport systems, such as the dependent ATP-binding cassette (ABC) transporters, facilitate the uptake of essential nutrients to sustain growth (3).

Aeropyrum pernix are found in harsh environments such as hydrothermal vents. A hydrothermal vent can be described as an environment of extremely hot aqueous solutions of gases or liquid on the surface of the earth. It grows optimally at high temperatures, ranging from 90 to 95 degrees celcius, which indicates that Aeropyrum pernix is a thermophile. The most optimal pH for a thermophilic aerobic Archaea is 7.0.

There are no known pathogenic Archaea.

None are currently known

1. Aeropyrum pernix’s proteome was analyzed by using 4 methods which complemented each other. Data obtained in these methods showed 134 unique proteins in Aeropyrum pernix. But perhaps the most interesting data obtained was that Aeropyrum pernix surprisingly uses TTG as the translational initiation codon 52% of the time, rather than the more common ATG and GTC. Aeropyrum pernix was the first example of an organism to use the TTG start codon predominately. This implies that eukaryotic cell machinery did not evolve from these organisms. (4) 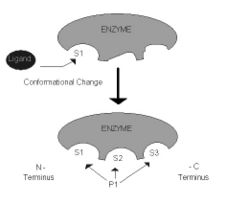 ApAAP diagram - made by Daniel Pak

2. The acylaminocly peptidase (ApAAP) of the Aeropyrum pernix was studied. This peptidase hydrolyses oligopeptides beyond the N-terminal peptide bond which indicates that ApAAP exhibits endopeptidase activity. It was thought that this enzyme was specific for hydrophobic amino acids and the S1 subsite, but further experiments showed that P1 residues can bind to the S1, S2, and S3 subsites. An oxyanion-binding site was found between the enzyme and product-like inhibitors. The S2 subsite is non-polar and it can bind to peptides with a longer N terminus. The S3 subsite is hydrophobic and doesn’t form hydrogen bonds with the P3 residue. The S1 subsite undergoes conformational change when ligand binds to it, indicating its flexible specificity. (5) Diagram to the right

3. The gene encoding for a thermosome, a type of chaperonin (proteins helping with the folding of a polypeptide into its functional form)was studied. The recombinant ApcpnA protein showed ATPase activity that is optimal at 90 degrees and pH 5. The ATPase is manganese and potassium dependent. The recombinant ApcpnA protein is a suitable molecular chaperonin since it prevents bovine rhodanese from thermal accumulation and helps with the thermal stability of alcohol dehydrogenase. (6)