African Sleeping Sickness (Trypanosome brucei gambiense) is a microbial vector driven disease that affects many parts of Africa. The disease takes action by first invading the peripheral nervous system of its host, and soon after passes the blood brain barrier to complete more neurological damage. The result of this infection is fatal to the mammalian host. From initial infection to death of the host system, this microbe needs only a few short months to become fatal. How is it that this disease can invade such secure parts of the human system so quickly? The human immune system seems to be far to advanced to let this microbe produce the effects that it does. Recent research looks deeply into both the spread of the infection through the mammalian host as well as the growth of the microbe within its vector, the tsetse fly.

The relationship between the tsetse fly and T. brucei is that of an obligate parasite, meaning the cell needs a host cell in order to function. Once transmitted from the tsetse fly to a mammal, the microbe becomes pathogenic. Unsurprisingly, across the 36 African countries that it is found in, the tsetse fly is known to carry a variety of trypanosomiasis infections. The tsetse fly is immune to all of the trypanosome diseases that they transmit. This protection comes down to their lack of hemolymph within their blood. Their nutrient availability can not provide the microbe with the nourishment needed for the trypanosome cells to replicate into their pathogenic form. The cell does however have a mild effect on its fly host in the way that any normal parasite-host relationship would.

Phylogenetic reconstruction of this disease has shown that this disease has existed for approximately 300 million years. The microbial coexistence with its insect parasites has existed for equally as long. This ancient coexistence between African mammals and their blood-sucking insect counterparts is assumed to be why most native Animalia are not affected by the disease. This immunity, however, does not stretch to the domesticated animals of the area. Trypanosoma brucei, the form of trypanosomes that causes sleeping sickness, is expected to be a recent development within history of trypanosomes. Most researchers suspect this because Trypanosoma brucei is the only trypanosome microbe that humans are not resistant to. [1]


What is African Sleeping Sickness 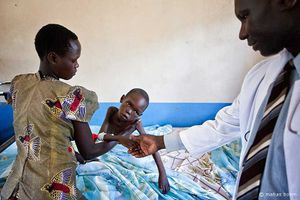 African Sleeping Sickness affects 30,000 people every year. The disease has been found in 37 African countries, all in the Sub-Sharan areas.

Trypanosomiasis, or better known as African Sleeping Sickness, is an infection of the human nervous system caused by the transmission of a Trypanosome microbe through an insect vector. The disease belongs to the Trypanosome family, with these symptoms especially attributed to the parasite species Trypanosoma brucei. The disease species is transmitted via the tsetse fly, a large biting fly located primarily in tropical African countries. The areas most at risk for such an infection are those of Sub-Saharan Africa: countries stretching from Mali to Sudan and than south, with only South Africa as an exception. Throughout history, this disease has been classified as a public health problem seen primarily in these African countries. About 10,000 cases of the disease are reported every year to the World Health organization, but unfortunately it is expected that the majority of cases go unreported and/or undiagnosed. [2]

Because this disease is vector borne, the microbe, Trypanosoma brucei, enters the human system by ways of the skin. An infected tsetse fly must bite the host, and through this wound the protozoan enters the system. After initial infection, the disease has two stages. The first of these stages is the time in which the parasite is found within the peripheral nervous system, but has not yet infected the central nervous system. When the infection has passed through the blood brain barrier and begins to travel within the central nervous system, the cell has reached the second stage. The disease than acts quickly, leaving its host with symptoms of fever, tremors, swollen lymph nodes, sleep disturbances, and speech problems within the first two weeks of infection. Following weeks lead to neurological deterioration ending in coma and soon after death. An untreated case can expect the disease to become fatal within a few months .