Difference between revisions of "Agricultural microbiology" 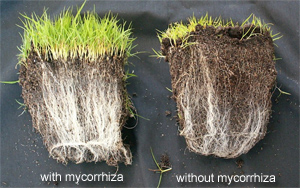 On the microscopic landscape of a root surface, different symbionts use unique methods to infect. Once anchored, some bacteria express genes that convert soil and atmospheric molecules into compounds valuable to the plant, such as nitrogen and phosphorous containing compounds. Others like mycorrhizal fungi produce vast networks of hyphae that essentially function as additional root surface area to mine soil for nutrients; they also provide some pathogen protection to the host roots [3]. At the plant-fungi interface, fungi provide plants with compounds—ammonium, nitrate, amino acids, inorganic phosphate, and organic compounds like urea—in exchange for plant carbohydrates acquired through photosynthesis [8]. The sloughed off cells from plant roots are important sources of carbon for organisms dwelling in the rhizosphere. These symbiotic relationships not only increase the bioavailability of crucial elements to plants, but also improve soil fertility by increasing labile carbon and nitrogen levels [10]. Crop rotation, especially involving legumes and their Rhizobia symbionts, is practiced precisely for this reason. 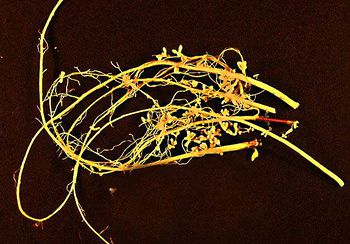 In an attempt to promote as much growth as possible, farmers often apply large quantities of fertilizer to crops. This brute-force method is not an effective option. Depending on qualities of the soil, the crops involved, and microbial symbionts, only 10% to 40% is taken up by crops. Thus, roughly 60% to 90% of applied fertilizer is lost to watersheds, groundwater, and other aquatic systems [4].

As the human population continues its climb, land available for agriculture continues to shrink over time. In order to produce supplies to meet the demands of mouths, farm animals, and biofuel production, the efficiency of food production per acre must be optimized. Microbial inoculants are one of the ways in which food production efficiency can be improved. Plant growth-promoting soil organisms increase net crop uptake of soil nutrients, resulting in larger crops and higher yields of harvested food. Besides farmland inoculants, practical applications of agricultural microbiology also include potting soil with mycorrhizal spores included [12].