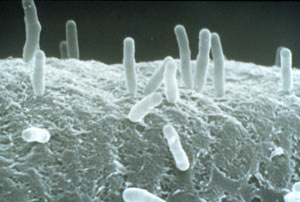 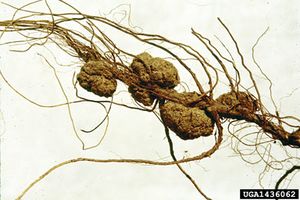 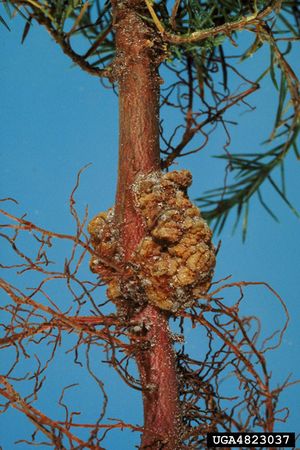 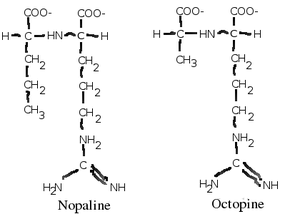 A. tumefaciens infects plants usually through an open wound. It seeks out phenolic compounds which spills from a plant wound and chemotactically moves toward its source. Once it enters its plant host, it injects a section of its DNA called the T-DNA which is derived from its Ti (tumor inducing) plasmid into its host[3]. The T-DNA is then integrated into the plant's genome, and has two effects on the plant host. The T-DNA first directs the plant cells to make auxins and cytokinins, which causes the cells to become irregularly shaped and form a visible tumor called a gall[3]. The T-DNA then directs the plant cell to start making opines (usually nopaline or agropine) which A. tumefaciens use as an energy source[4]. Since few other organisms (including the plant cell which it infects) can use the opines as an energy source, A. tumefaciens creates a special niche for itself inside the gall which it has an energy source only available to itself[4].

Although it is clear that A. tumefaciens integrates its own DNA into that of its hosts and induces them to make opine-producing tumor cells, the details of this process is just being unraveled. It is known that all of the required virulence factors resides on the Ti plasmid, and A. tumefaciens that have lost this plasmid becomes no longer pathogenic. The bacteria uses a Type IV secretion system to inject the T-DNA and virulence protein into its host. It has been discovered that an entire suite of proteins, in addition to the T-DNA, is necessary to induce the host plant to make gall cells. When the T-DNA is copied from the Ti plasmid a protein called VirD2 complexes with it to protect it for nucleases of its host cell and help its transport into the nucleus where it can act. In order for the T-DNA to cross from the bacteria into the plant cell, a protein called VirE2 forms a channel between the membrane of the plant and bacterial cell[8]. Another protein, VirE3, has been discovered to be injected into the plant cell. It has been showned that VirE3 is translocated into the plant nucleus which it interacts with native transcription factors to cause a deregulation of plant cell proliferation and cause the growth of galls[nar.oxfordjournals.org/cgi/content/abstract/gkl877v1]. Other virulence factors are not necessary for the process of tumor induction but extends the host range of A. tumefaciens. The process which A. tumefaciens causes disease has not fully been elucidated, future research still promises to shed light on the process.

A. tumefaciens can live either freely in the soil or inside plants as a parasite. When A. tumefaciens infects plants it forces it to produce metabolites called opines, and since it is one of the few organism that can utilize opines as an energy source, and therefore inducing its host to produce opines creates a special niche which it has few competition. However, the natural situation might be more complex than what the opine hypothesis suggests, since various species of Pseudomonas which also have the capability of using opines as an energy source have been discovered in opine-producing galls along with A. tumefaciens[3], so the opine niche which the bacteria creates also supports the growth of other organisms.

A. agrobacterium continues to be one of the oldest and most commonly used technique for transfecting genes into plants. Recent research to produce cellulase has used to express a bacterial cellulase gene in Lemna minor (duckweed) using A. agrobacterium. As the interest in producing cellulosic ethanol has increase, a method for breaking down cellulose into sugars is being seeked by scientists. A gene for cellulase was isolated from a thermophilic bacteria and transformed into duckweed using A. tumefaciens as the vector. Duckweed expressing this bacterial cellulase is in no danger of destroying its cell wall since the bacterial cellulase in question is only active at 60 - 80 degrees Celsius. Because Duckweed is a plant with high protein content (up to 40% of its dry weight) it is expected that it could be turned into an efficient bioreactor for proteins such as cellulase. However, extraction of cellulase from genetically engineered duckweed has been complicated by the fact that a subunit of the cellulase complexes with the cellulose of the duckweed in a form that is hard to remove. Further engineering of the cellulase to rid the subunit which binds to cellulose will hopefully result in a higher yield of cellulase[10].

Even though A. tumefaciens infects only plants in nature, it has also been shown to infect other species, including fungus and even animals. Techniques have been used to knock genes into species as diverse as fungus and animals. In fact, it is believed that A. tumefaciens is capable of putting genes into most eukaryotic species, and this could be turned into a versatile genetic manipulation technique, taking advantage of the bacteria's ability to integrate only one copy of the desired gene stably into its host. When sea urchin embryos are incubated with A. tumefaciens, it was discovered that T-pili, which the bacteria uses to transfer DNA into its plant host, formed between the bacteria and the sea urchin cells. When the embryo spontaneously dissociated into single cells they were examined and discovered to contain T-DNA integrated into their genome. A. tumefaciens transformation could potentially complement current methods of inserting genes into eukaryotic organisms[7].

Of great interest to scientists is the molecular machinery which A. tumefaciens uses to inject DNA into its host, which has only been characterized in the last decade or so. One protein of interest is VirE2. VirE2 appears to bind to single-stranded T-DNA and appears to protect it from the external environment, but in recent years it was discovered it had another function. It appears to form a voltage-gated channel in the plant cell's plasma membrane through which single-stranded T-DNA could pass through into the plant. VirE2 therefore has two different forms with two different functions, first in its monomeric form it is freely soluble and could bind to and protect single-stranded T-DNA, while in its multimeric form it is membrane-bound and acts as a channel for which ssDNA and other soluble components could pass through[8].