The complete genome of Akkermansia muciniphila has one circular chromosome of 2,664,102 bp with a G+C content of 55.8%.Akkermansia muciniphila has a total of 2,176 protein coding sequences and an overall coding capacity of 88.8% [7]. Once sequenced, the genome was found to contain many candidate mucinase-encoding genes, but did not seem to have any genes for encoding canonical mucus-binding domains [4,8]. Akkermansia muciniphila's genome did contain numerous phage-associated sequences, which indicates that viruses may have played a role in the evolution of the species.

Akkermansia muciniphila is able to use mucin as its sole source of carbon, nitrogen, and energy. It is an obligate chemo-organotroph, as evidenced by a study that found no growth on a basal medium supplemented with vitamins and purged with H2/CO2. After previous research hypothesized that A. muciniphila survived solely on the mucin in the host intestine, it was found that only a mucin medium was needed to culture A. muciniphila. Akkermansia muciniphila was found to produce acetate, propionate, and ethanol from mucin fermentation [7]. 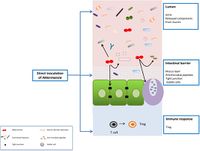 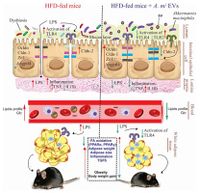 Akkermansia muciniphila colonizes the mucosa layer of the host's gut, where it uses mucin as its sole source of carbon and nitrogen [6]. Though many mucin degrading microbes in the intestinal layer of a host can be pathogenic, A. muciniphila has mostly positive associations with its host. Since A. muciniphila remains in the outer mucosal layer and does not penetrate through to the inner layer, colonization is beneficial because the bacteria promotes the natural turnover of the outer mucin layer [10].

Several studies have found that Akkermansia muciniphila is linked to metabolic homeostasis and its presence in the intestine can help alleviate fat gain and type 2 diabetes as seen in experiments on mice and testing of human feces samples for A. muciniphila. Since A. muciniphila is located close to the animal host epithelial cells, it can stimulate significant regulatory responses. One study found that after exposure to A. muciniphila, the mice epithelial cell line activated TLR-2 expression and tight junction proteins, while reducing pro-inflammatory cytokines in the colon, as seen in Figure 3 [1]. This led to an increase in intestinal barrier integrity, and a decrease in inflammation which led to a decrease in obesity and type 2 diabetes symptoms.