Difference between revisions of "Alaskan tundra"

The typical classifications of the tundra biome are: short growing seasons, low temperatures, drought, nutrient limitations, heavy winds, and high intensities of solar radiation. These extreme climatic conditions allows for the accumulation of soil organic matter. This causes the tundra biome to act as a carbon sink despite a low rate of primary productivity. Recent warming in this area due to climate change could have a significant impact on widespread global processes. The decomposition of soil organic matter could release much carbon into the biosphere, while the replacement of existing floral communities by plants less suited for extreme conditions and with higher photosynthetic capabilities could act as a carbon sink. The tundra biome consists of a 20% of the Earth’s terrestrial surface (Kaplan 1996), and contains approximately 14% of the global carbon stored within soils (Billings 1987); making it a significant contributor to widespread global processes. With recent climactic warming throughout the globe, there is concern that an increase in temperatures could facilitate higher levels of microbial decomposition. This would contribute to additional increased in atmospheric carbon dioxide levels. This increase in decomposition could also lead to higher rates of other microbial processes due to an increase in nutrient availability (Bucheridge et al. 2010). Changes in vegetative communities could also lead to changes in microbial communities. Temperature changes could also directly select for microorganisms that have a thermal optima under the new conditions.

The tundra also exhibits extremely low amounts of precipitation. The typical amount of precipitation received throughout the tundra biome is only approximately 15-20 cm a year (Remer 2009).

Because of lower temperatures and high levels of moisture (due mostly to permafrost), decomposition is limited. This leads to nutrients existing in a form that is not readily available to many organisms. Other than this, unfrozen water content of soils below 0 degrees Celsius limit the diffusion of nutrients that plant and microorganisms can uptake, leading to further nutrient limitation (Ostroumov and Siegert 1996).

The tundra biome has a relatively higher level of solar radiation compared to other biomes.

Lower temperatures result in lower decomposition rates. Even though the tundra exhibits low annual precipitation, much of the ground remains saturated through much of the year. This water is typically frozen and inaccessible to plants. This high moisture content limits oxygen availability, which is needed to decompose the dead organic matter. Despite the low productivity of the tundra climate, organic matter accumulates because the decomposition of plant litter is limited by low soil temperatures and often wet, anaerobic conditions (Heal et al. 1981; Graglir et al. 2001). This leaves much of the nutrients that plants and microorganisms need for growth and development in a form that remains inaccessible to them (Jonasson and Shaver 1999).

Mycorrhizas are the mutualistic symbiosis between plant roots and fungi. Mycorrhizal associations are believed to be most beneficial in habitats where plants face strong nutrient limitations. Although the strong mycorrhizal dependence of the majority of plants across the globe is well known, it is even more important for tundra floral species because of a limiting nutrient supply caused by lower relative decomposition rates. When the plants lose their tissues, the nitrogen contained within them becomes reaccessible slowly relative to most other plants existing elsewhere. In these habitats, mycorrhizal plants tend to be strongly dependent on their fungal relationships for nutrient acquisition (Allen and Allen 1991).

Herbivory also poses a greater detrimental effect to these plant species. Tundra plant species cannot easily reacquire nutrients lost to herbivores. Because of this, they need to allocate more resources to chemical defenses. A study performed by Cates and Orians (1975) found that evergreen shrubs had stronger chemical defenses than their deciduous relatives. These defenses on herbivory could potentially influence decomposers that would break down the leaf litter of these plants. The same study also recognized that Graminoids of the region retained a relatively high content of nutrients stored in rhizome reserves as well as overall belowground biomass.

The Tundra and Climate Change 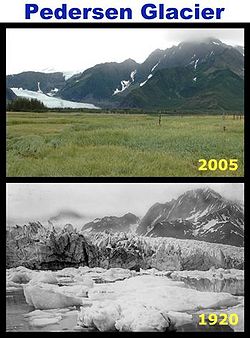 As mentioned before, the decomposition of plant litter is limited by low soil temperatures and often wet, anaerobic conditions (Heal et al. 1981; Graglia et al. 2001). Even though productivity in the tundra biome is relatively small, there are large accumulations of undecomposed organic matter. It is estimated that the tundra contains 14% of the global carbon stored within soils (Billings 1987). Since the end of the last glacial maximum to the present, the tundra has constituted as a large carbon sink, and may have been a contributing factor in the pre-industrial decrease of atmospheric carbon dioxide (Adams et al. 1990; Gorham 1991). Because of recent warming of the tundra due to climate change, the inevitable release of carbon from this carbon pool could pose a serious threat. This could cause possibly lead to a vicious positive feedback cycle that would contribute greatly to higher levels of carbon dioxide.

Specialized tundra plant species remain successful in harsh environmental conditions because they are able to maintain photosynthetic rates yielding higher energy values than they consume, as is necessary for the existence of all primary producers. For these plant species, the tundra setting acts as prolific scenario largely because of the lack of competition, parasites, and diseases (Callaghan et al. 2004). As temperatures begin to increase, it is plausible that these plant communities will be replaced by plants less suited for extreme conditions and with higher photosynthetic capabilities. The degree to which plant species can tolerate or take advantage of changing climate conditions depends on characteristics such as growth form, phenology, and allocation and storage patterns of carbon and nutrients (Shaver & Kummerow 1992). If a plant species exchanges defenses to an extreme climate with photosynthetic capability in non-extreme climate, it typically cannot contend well with other species with an opposite mechanism. With increased temperatures, one would expect a negative feedback mechanism due to an increase in the vegetative carbon pool of the tundra. This difference in vegetative communities and turnover rates could highly impact microbial communities.

One could speculate which feedback mechanism would have a greater impact on the global carbon cycle. Again, a positive feedback mechanism would be induced by increasing temperatures accelerating decomposition and reducing the carbon sink within the soil. A negative feedback cycle could occur due to a higher rate of photosynthesis and thus a greater amount of carbon in the vegetative pool. Already, tundra ecosystems have changed substantially in terms of shrub abundance, primary production, and carbon exchange (Walker et al. 2004). One recent study carried out by Qian et al. (2010) claims that soil organic carbon in this region has actually increased in the beginning of the 21st century due to greater inputs from higher amounts of primary production.

Organic matter accumulates because the decomposition of plant litter is limited by low soil temperatures and often wet, anaerobic conditions (Heal et al. 1981; Graglir et al. 2001). Recent warming in this area due to climate change could have a significant impact on widespread global processes. The decomposition of soil organic matter could release much carbon into the biosphere, while the replacement of existing floral communities by plants less suited for extreme conditions and with higher photosynthetic capabilities could act as a carbon sink.

In comparison to other biomes, the amount of gram negative bacteria found in throughout the tundra is relatively high (Belova et al. 2009)

There are many fungal organisms with unique properties in the tundra to deal with temperature stress. Fungi are the primary organisms responsible for decomposition there. Mycorrhizal fungi are also highly important in providing nutrients to producers due to nutrient limitation throughout the tundra (Hobbie et al. 2009). Many nutrients are retained in the accumulated undecomposed organic matter.

Due to lack of vegetation, there are many Nonsymbiotic N-fixing Bacteria in order for the microbial community to meet nitrogen demands in an already nutrient poor environment. This could change if increased decomposition rates and temperature increased nutrient availability and primary production (Bucheridge et al. 2010).

O. Roger Anderson is a microbiologist at Lamont-Doherty Earth Observatory who studies bacteria, amoebas, fungi and other microorganisms. He has been putting together mathematical models to estimate the role of microorganisms in the global carbon cycle in the face of climate change. This study addresses the positive feedback cycle hypothesis listed earlier on this Microbe Wiki page. This topic has been taken up by a number of other researches at institutions all across the globe. Here is a website that goes into further detail:

Dr. Feng Sheng Hu from the University of Illinois at Urbana-Champaign addresses both the positive and negative feedback cycles by looking at the change of carbon storage and advancing tree lines. He also does studies the history of both between glacial and interglacial cycles, which can be used to gain a better understanding of what is going on today. Here is a website that goes into further detail:

An article written by Ned Rozell covers some interesting research about fungal decomposers in the tundra and specializations they require to thrive in the extreme conditions. A forum and links to the studies can be fount at: