Difference between revisions of "Alcanivorax" 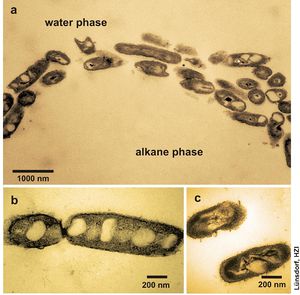 Figure 2. Supertanker Exxon Valdez grounded on Bligh Reef which released 11 million gallons of crude oil into the water. This oil-contaminated seawater is the preferred habitat for Alcanivorax. Image from USGS[2]

Alcanivorax, first described in 1998, is a Gram-negative, halophilic, aerobic, rod-shaped, oil-degrading marine bacterium that is found in low abundances in unpolluted environments in the upper layers of the ocean, but quickly becomes the predominant microbe in oil-contaminated open oceans and coastal waters when nitrogen and phosphorus are not limiting [2]. When conditions in these moderately halophilic environments are right, Alcanivorax may make up 80-90% of the oil-degrading microbes present in the area [4]. It is described as a non-motile bactertium which is true for species such as Alcanivorax borkumensis, but other species such as Alcanivorax venustensis were described to be motile by polar flagella [1]. The optimial conditions described for A.borkumensis growth include temperatures in the range of 20-30 degrees celsius, and a NaCl concentration of 3-10%.

As a result of their profound ability to degrade and live predominately on alkanes, as well as to become the dominant microbes in oil-contaminated areas, Alcanivorax plays a huge role in the biological cleanup of oil-contaminated environments. These oil-contaminated environments in the ocean are largely due to anthropogenic sources such as oil spills caused by tankers accidents (Figure 2), and cause serious ecological damage to plants and animals on the coast as well as other inhabitants of the ocean. Microbes such as Alcanivorax provide a major route for the breakdown of these pollutants, and demonstrate how marine bacteria keep the environment in check. Of all the Alcanivorax species and other oil-degrading microbes, Alcanivorax borkumensis is one of the most important worldwide due to the fact it produces a wide variety of very efficient oil-degrading enzymes. With this knowledge, A. borkumensis could provide a useful tool for bioremediation of oil spills.

Figure 3. Mechanisms for oil degradation and survival encoded by the A. borkumensis SK2 genome. Image from Victor de Lorenzo[3]

The Alcanivorax borkumensis strain SK2, isolated from a seawater sediment sample in the North Sea at a site located near the Isle of Borkum, was the first hydrocarbonoclastic bacterium to be sequenced and was completed by Susanne Schneiker et al. It's genome consists of a single circular chromosome with 3,120,143 base pairs and an average G+C content of 54.7%. The genomic analysis of A. borkumensis SK2 revealed several new insights into the bacterium's role for (i) n-alkane degradation (which includes metabolism, biosurfactant production and biofilm production), (ii) it's system for capturing or scavenging the small amounts of nitrogen, phosphorous, sulfur, and other elements in a nutrient-poor marine environment which allows for more efficient alkane degradation due to their main limitation of nutrient availability, (iii) as well as means for coping with stress factors such as high salt contents and high UV radiation since it thrives mostly in the upper layers in the ocean where UV light is encountered (Figure 3).

Alcanivorax borkumensis, a Gram-negative, rod-shaped chemoorganotroph, is able to use n-alkanes as its principle carbon and energy source by use of the broad spectrum of oil-degrading enzymes it possesses, but they can also use a limited number of organic compounds such as aliphatic hydrocarbons, volatile fatty acids, and pyruvate. However, it cannot utilize carbon sources such as sugars or amino acids. Cells grown with pyruvate were observed to be 2.0-3.0 micrometers in length and 0.4-07 micrometers in diameter, however, cells were shorter (1.0-1.5 micrometers in length) when cells were grown with n-alkanes as the carbon source (see Figure 1) [5]. When the slow growing A. borkumensis uses n-alkanes exclusively, the microbes produce extracellular and membrane-bound surface-active glucose lipids called biosurfactants. These biosurfactants reduce the surface tension of water from 72 to 29 mN m-1 and act as natural emulsifiers which enhances the break up of oil-in-water emulsions [4,5]. Due to the low solubility of oil in water, most oil degradation takes place at the oil-water interface where A. borkumensis attaches and forms a biofilm around the oil droplets as depicted in Figure 3.

Figure 4. Oil spills in the ocean affect more than the aquatic environment. Alcanivorax helps reduce the damage on ecosystem health.

Alcanivorix is a novel species living in the oceans that plays a major role in keeping our pristine oceans as well as the inhabitants of the ocean and the inhabitants of the coastal regions in good health. It has been detected worldwide in places such as the Mediterranean Sea, Pacific Ocean, and the Arctic Sea [4]. In seawater with high concentrations of n-alkanes (as a result of oil spills, natural oil fields, and/or processing plants), Alcanivorax quickly becomes the predominant microbial community and is found in higher populations when compared to Alcanivorax in unpolluted seawater. There have been several recent fields studies on bacterial community dynamics and hydrocarbon degradation in coastal areas contaminated with oil. These field studies have demonstrated the immense importance of Alcanivorax (particularly A. Borkumensis) in oil-spill bioremediation [2].