Alcanivorax borkumensis (A. borkumensis) is a Gram-negative, rod-shaped hydrocarbonoclastic (“oil-degrading”) bacterium. It thrives in halophilic, aerobic environments and is found in the upper layers of freshwater or marine environments such as the Mediterranean Sea, Pacific Ocean and Arctic Sea [4, 8]. This bacterium is significant because it is involved in the bioremediation of oil-contaminated aquatic environments [1]. 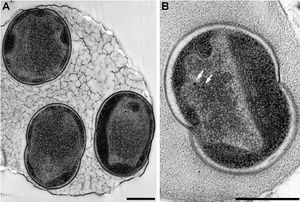 Under optimal conditions, A. borkumensis can be the dominant species present within a contaminated area and can comprise up to 80% to 90% of the oil-degrading microbial population present [2]. An example illustrating the significance of A. borkumensis is the Enbridge oil spill that occurred in July 2010 in Michigan’s Kalamazoo River Enbridge Oil Spill. Close to 900,000 gallons of crude oil were leached into the water due to a ruptured pipeline. Over time, scientists discovered A. borkumensis populations to flourish and the degradation of crude oil to be accelerated [11]. If not in part to the metabolism of A. borkumensis (see subsection 3), the decimation of wildlife and marine populations would have been rampant. 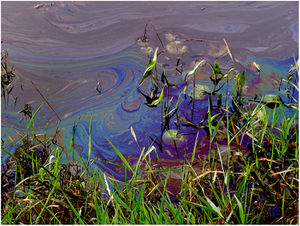 A ruptured pipeline leached approximately 900, 000 gallons of crude oil into the Kalamazoo River in July 2010. A. borkumensis populations thrive in oil-contaminated water [2F] 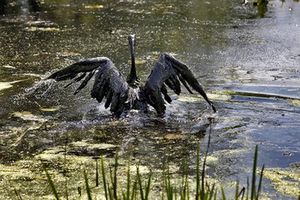 The Enbridge oil spill not only affected aquatic environments, but wildlife as well. The unique metabolism of A. borkumensis is ideal in reducing the damage caused by oil-contamination [3F]

A. borkumensis is a native species and is adapted to living in oil-contaminated aquatic environments [2, 4]. Its genome encodes for a broad spectrum of efficient oil-degrading enzymes that can be used in bioremediation of oil spills [3, 6, 9]. This provides A. borkumensis with a competitive advantage in that it can consume a wider variety of alkanes than other known species and thus become the dominant population in an oil-contaminated area [2]. Research is now underway to manipulate the growth of A. borkumensis with amendments of phosphorus and nitrogen fertilizers [2, 4]. Scientists are also looking to isolate genes encoding oil-degrading systems and insert these into a novel organism that can be used to remediate oil spills. However, there are risks associated with each of these methods. The addition of phosphorus and nitrogen in the form of fertilizer may actually contaminate aquatic environments further and aggravate environmental degradation [2, 3]. With respect to genomic transfer, there is the possibility of rapid DNA evolution molecular evolution which can result in harmful, dominant bacteria that can choke other existing species in aquatic environments [2, 3].

A. borkumensis strain SK2 is the first hydrocarbonoclastic bacterium to have its genome sequenced genome sequencing [7]. The genome is comprised of a single circular chromosome with an average G+C content GC-content of 54.7% [3, 7]. Genomic analysis revealed the importance of three main systems [7]: a.) Degradation of n-alkanes: metabolism, biosurfactant surfactant and biofilm biofilm production b.) Acquisition of phosphorus, nitrogen, sulfur and other elements to allow for alkane degradation c.) Tolerance to stress factors such as high UV radiation encountered in its natural habitat of top layers of aquatic environments 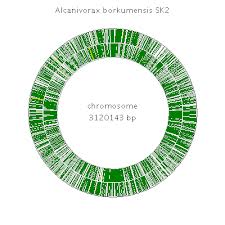 Sequenced genome of A. borkumensis SK2 [4F]
Error creating thumbnail: File missing
Hydroxylation of alkanes by AlkB1 and AlkB2 allows for the degradation of oil by A. borkumensis [5F]

Genes required for DNA alkylation alkylation, recombinatorial and nucleotide excision repair, and SOS response SOS response are also present [2, 3]. These genes aid A. borkumensis in dealing with the damaging effects of UV light it encounters as a result of inhabiting the upper layers of aquatic environments.

The genome of A. borkumensis SK2 encodes for many genes which aid in survival mechanisms, such as tolerance to UV light. Other genes encode for enzymes such as AlkB1 and AlkB2 which aid in oil degradation [6F]

A. borkumensis can use n-alkanes, aliphatic hydrocarbons, volatile fatty acids and pyruvate as carbon and energy sources [6]. When using only n-alkanes as carbon and energy sources, A. borkumensis produces extracellular and membrane-bound glucose lipids termed biosurfactants [10]. Biosurfactants are crucial to the biodegradation of oil because they reduce surface tension of water and act as natural emulsifiers to elute oil out of water, thereby making it available to biodegrade. 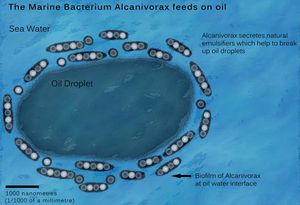 A depiction of the mechanism by which A. borkumensis degrades oil droplets [7F]

Although little is known about the exact mechanism used by A. borkumensis to biodegrade oil, a hypothesis summarizes the method with the following steps [6, 9]: 1.) oil leakage into aquatic environments causes an increase in phosphorus and nitrogen concentrations 2.) increased nutrient availability causes A.borkumensis to metabolize and grow faster; population increases 3.) A.borkumensis attaches and forms a biofilm around the oil droplet. The biofilm aids in the recruitment of additional bacteria to the site of contamination 4.) AlkB1 and AlkB2 enzymes synthesized and are used to oxidize C-alkanes, thereby catalyzing the degradation of oil 5.) Biosurfactant produced and breaks oil and water emulsions to make oil more readily available for A.borkumensis